Spiritual Sight and Unity in The Spirit 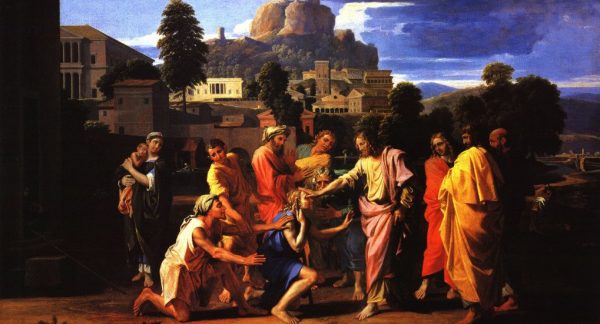 Today we have the privilege to hear a beautiful story from the Holy Gospel. I wonder if we approach reading the gospels as a privilege? I wonder if we approach them with joy and anticipation such as the way we approach a good novel or a show on Netflix? To hear the gospels is to be given a great gift and a privilege, one that not all people around the world have. Some do not have access to Bibles, some are forbidden from reading them. But by God’s grace, we have access to the living Word of God, Jesus Christ and His teachings and works found within the gospels. It is so valuable to us as the Church that we wrap the gospels in a gold cover and place them on the Holy Altar. Every single time we dig into the gospels, we are digging for light and life. I hope that this is something we take seriously in our daily lives because what we learn within the gospels is of much greater value than what the world has to offer us.

What kind of health is St. Hilary writing about? Certainly physical health but also and more importantly, spiritual health. I heard the statistic yesterday that prescriptions for depression rose more than 20% in the last couple of months. Health is more than just avoiding sickness, health is holistic and it involves the whole person and their soul. We would do well not to neglect our spiritual health out of an unbalanced fear for our physical health. I fear that this is beginning to happen in churches all over our country and perhaps the world. It terrifies and saddens me.St. Hilary continues saying “The blind men saw because they believed; they did not believe because they saw. From this we understand that what is requested must be predicated on faith and that faith must not be exercised because of what has been obtained.”

As Christians, everything begins with deep faith. From a point of deep faith, we then enter into a relationship where we see the hand of God and know His presence in our lives. If today we feel that we don’t know God and we don’t feel His presence, it is possible that we still need to embrace the difficult task of repentance and confession. We may also need to fix the order of things. Instead of searching for clues to the presence of God, we have to give our hearts over to Him in faith as a first step. The existence of God becomes our first principle, the thing we believe above all else. We have to desire the good, the true and the beautiful above all else. This brings us to a desire for God, who is absolute and infinite goodness, truth and beauty, as well as love.

Sometimes people believe in God but they don’t necessarily believe in God, correctly. St. Paul says of these people, they have zeal but not according to knowledge. St. Paul knew this very well because he was one of those zealous people who went about hunting down and creating trouble for those who didn’t believe in God in the way that he was convinced was correct. It turns out that St. Paul had a great blindness. He persecuted the Christians because he was completely blind to the true identity of the Lord Jesus Christ. He was blinded to the amazing work that the Holy Spirit was doing in the lives of the Christians and the early Church community.

We also have to be careful about our attitudes and our misplaced zeal regarding all manner of subjects from religious and spiritual to the political, the local and current events. Sometimes our own sins and spiritual blindness cause us to make enemies of those who think differently than us. As Christians, we should beware of this tendency within ourselves and within society. The goal of Satan is to divide us and there are political powers at work in the hopes of dividing society against itself. We begin to think of ourselves in divisive terms “white” or “black”, rich or poor, conservative or progressive, Republican or Democrat, mask enthusiasts and those who do not like masks. All of these are man made divisions. They should not divide people who have a living faith in Christ, because a living faith in Christ gives us the ability to love.

Let me prove it to you. St. Paul was out hunting Christians down and punishing them for their belief in Christ. He hunted down his own people, the Jews who had come to faith in Christ. In his mind there was only God, His people, the Jews and the law of Moses. Everything and everyone else was somehow alien to this. He was divided in his understanding, and blinded by his own zeal and pride.

He was struck blind after his encounter with Jesus Christ. This physical blindness was real but it was also symbolic of his deeper spiritual blindness, and he remained blind until his baptism in Christ. After this, he began to see clearly through renewed, spiritual eyes. Listen to what he writes in today’s epistle reading “for in Christ Jesus you are all sons of God, through faith. For as many of you as were baptized into Christ have put on Christ. There is neither Jew nor Greek, there is neither slave nor free, there is neither male nor female; for you are all one in Christ Jesus.” Amazing! The man who hunted down his own people like dogs, and would never so much as sit with a gentile for supper, gave us these lovely words through the work of the grace and love of God in his life. So we see that Christ centered people see the world differently, through eyes of love for their fellow Christians and even for the outsider as one created in the image and likeness of God.

So my brothers and sisters, beware that you may not also fall into the traps of the godless world around you,where you divide people and put them into groups and then legitimize the way that you treat those groups based on your misguided and man made divisions, assumptions and goals. You will know them by their fruit. If the fruit is not demonstrated through acts of love and compassion, the fruit is not from God, it is simply rotten.

We all need to have our spiritual blindness healed through deep repentance and confession of our sins and we need to thirst for Christ and run to Christ and call out to Him in faith. Then we will be like the blind men and like St. Paul who also received his sight through faith. The Lord said “according to your faith be it done to you.” May God remove any spiritual blindness that is within us and restore our sight. What is the limit or the measure of our vision of God? Let it be according to your faith. Glory be to God forever AMEN.