St. John and The Boy Who Turned to Evil 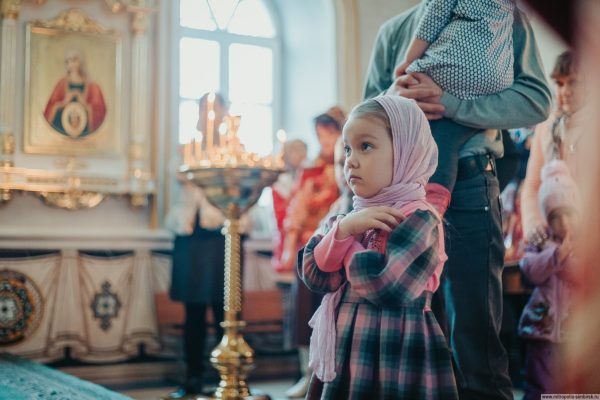 By the Grace of God, Matushka and I welcomed our fourth child Elijah into the world this past week.  Aided by some prayers for a difficult labor after 32 hours, he emerged on Monday afternoon. By that evening, I started to do what every parent has probably done after the birth of a child.  I sat down, looked down at his wrinkled little face, and asked myself: What is going to become of this kid?”

Children, whether they are given to us as parents, or spiritually adopted as God parents, are without a doubt a tremendous gift from God.  Just like all of the gifts that we are given from above, whether it is a family, a home, a gift of love, or even the gift of a new day, the most important thing for us to remember is what to do with these gifts we have been given.

As parents and Godparents, the answer is given to us.  We are called to take the gift of children and to show, by the way we live our own lives, what the Love of God looks like. What better way to learn how to do that then by recalling the life of “the disciple whom Jesus loved”, and who’s falling asleep we remember today, St. John the Theologian.

St. John is often called the Disciple of Love, not only because of his preaching, but also because of the role models that he had to learn from!  Who better to learn what love is than from Jesus Christ Himself!  John was an eye-witness to the greatest act of Love the universe had ever known, when he stood at the foot of the cross!  Not to be outdone by Christ, St. John was then given another Mother at the cross, when Christ told him to take Mary the Theotokos into his home, who no doubt continued to radiate the love of her Son to him!

Taking the example of Christ and the Theotokos, St. John spent the rest of his life teaching others about what Love looks like.  He organized many communities in Ephesus, while also enduring many trials and persecutions from the Pagan Emperor Domitian.  At one point, St. John was forced to drink poison that was meant to give him a slow and painful death, but he made the sign of the cross over it before drinking it and remained unharmed.  When that didn’t work, Domitian ordered that he be put into a cauldron of boiling oil, but again St. John remained unharmed!  Seeing that not only was he failing in torturing St. John, but that rather more people were being converted after seeing these miracles, Domitian exiled John to the island of Patmos where he remained until the emperor died.

There is a story in St. John’s life after he returned from Patmos, that speaks to our role in the Church as it relates to our children.   St. John was visiting one of the Churches in Smyrna, and he noticed this young boy who seemed to have a very natural love for God.  He turned to the local bishop at the time and said: “I am entrusting you with this boy, in the presence of this entire Church, Christ is my witness!”

The bishop did what he was told, and looked after the boy, instructing him in the Church and eventually baptizing him in the faith.  But as so often and sadly happens in our own day and age, this is where the bishop’s involvement in the child’s spiritual life ended.  He eventually lost track of the boy, who met up with the wrong crowd, and eventually became the leader of a desert gang who was responsible for various raids, theft, and murder throughout the region.

After some time had passed, St. John returned to Smyrna, only to find out the fate of this young man. What do you think his reaction was?  He was in his 90s at the time, nearing the end of his life, and here was this fallen youth who he had barely known. What did he owe this child? But St. John, the disciple of Love, understood that we as parents, Godparents, and as a community, have a God given responsibility to protect the gift of Children that we have been given.

After learning where the boy’s gang typically settled, the 90 year old disciple got on a horse and went out into the desert.  St. John was captured by the lookouts and he asked them to take him to their leader. When he was brought into the presence of the youth, the young man recognized him immediately.  The love St. John had shown, immediately penetrated all of the years of darkness that he had been living in.  The young man turned around, and ran away in shame, but St. John ran after him saying:

“My son…why are you running away from your father?  I am old and unarmed…have pity on my son and do not fear me!  You can still hope in salvation…I would willing die for you, just as Christ had died for us.  I would give my soul for you!”

The young man stopped, hung his head, threw aside his weapon, and with tears, he threw himself into the Apostles embrace, trembling with emotion and asking forgiveness.  That day, the young man received a second baptism with his own tears.  He returned back with St. John, showing us today this incredible example of repentance, and the triumph of apostolic love.

This is an incredible story from the life of St. John, that gives us two important lessons to remember when it comes to our children.

1.)    The way to show love and honor to the gift of children that we have been given by God Himself, is by having them grow up and instructed by God Himself in the Church.  It is here where they learn what Love is…what Truth is…and what community looks like.   If we ignore this calling and don’t bring up our children in the Church, it is the world that will teach them.  When they eventually fall away, how much more difficult it will be for them to come back?

2.)   If and when the faith of our children waivers by the temptations of the world, chase after them dear ones!  We show our love for them, even when they are running away from us, in order to remind them of the love that they once had in the embrace of Christ and His Church.

Through the prayers of St. John, the Disciple of Love, may our Lord save and protect us and our children…Amen.