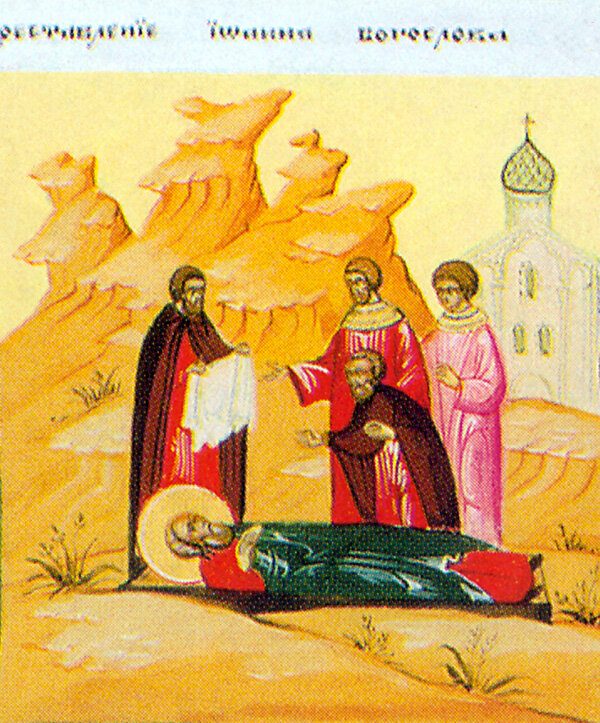 O Apostle John, speaker of divinity, the beloved of Christ God, hasten and deliver thy people powerless in argument; for He on Whose bosom thou didst lean accepteth thee as an intercessor. Beseech Him, therefore, to disperse the cloud of the stubborn nations, asking for us safety and the Great Mercy.

Who can tell of thy mighty works, O virgin Saint John? For thou pourest forth miracles, and art a source of healings, and thou dost intercede for our souls, as the Theologian and the friend of Christ.

Today, the Holy Orthodox Church commemorates the repose of the Holy Apostle and Evangelist, St. John the Theologian. As we learn from the Holy Gospels, St. John, one of the sons of Zebedee, was called by Christ to abandon his fishing nets to become a fisher of men and a son of thunder. Saint John became one of the twelve apostles, and despite his being – according to tradition – the youngest, he was one of only three to witness the Transfiguration, the only one to rest his head on the bosom of Christ at the Mystical Supper, and the only one to follow Him to the foot of the Cross.

The Gospel of John is distinctive for its theological depth and profundity. The Holy Evangelist begins with the proclamation of Christ as the Word, the Logos, become flesh. The Church places the reading of this gospel only during the days after Pascha, most likely because the richness of its theology was judged to be heard only by those initiated in the Faith – hence its reading is placed after the traditional period of catechesis of converts during Lent and their baptisms on Holy Saturday. He, of course, also authored three universal epistles and a book of his revelation granted on the island of Patmos – all are included in the canonical books of the New Testament.

In a homily in honor of St. John, Saint Gregory Palamas points out some beautiful parallels with which Our Lord Jesus Christ blessed the life of the saint:

Christ was the bel​​oved Son, John was the beloved disciple. Christ was in the bosom of the Father, John leant on Jesus’ breast. Christ  was a virgin, and by His grace, so was John. Christ was the Son of the Virgin, and so was John. “The Lord thundered from the heavens”, and John was thunder, for he, more than the others, was called thunder and the son of thunder, a most theological thunder which resounds to the ends of the earth declaring the divine truth that in the beginning was the Word from the Father, and the Word was with God, and was God, and in Him was life and the true light, which lights every man coming into the world, by whom in the beginning all things were made.

We thus rightly honor this holy man on the day of his repose. The tradition of the Church teaches that after his burial, the disciples found his body had disappeared, leaving no earthly remains. In this way, the Lord honored him in a manner similar to His Mother, the Theotokos.

When contemplating the close and loving relationship that St. John had with Our Lord, what can we as Christians hope to emulate about his life? We do not have the opportunity to walk side-by-side with Christ, to see the Light of Tabor, to stand at the foot of the Cross, to welcome the Holy Virgin to stay in our homes as our own mother, or to have visions of the Lamb surrounded by the saints in heaven. We do learn from the tradition of the Church, that this very same man had but one simple teaching as he neared the end of his life: “Little children, love one another.” Because he repeated that phrase so often, his disciples asked him why he kept saying it. He replied simply: “This is the Lord’s commandment; and if ye keep it, it is enough.”

While we cannot emulate the particulars of St. John’s life, we can honor him on this day by our love for God and one another. Before his repose, St. John was reminding his disciples what the Lord had taught him – that all of the Law and the Prophets hang on the two commandments to love God and to love our neighbor as ourselves. He was also reminding them of what he had taught them by his own epistles – that we cannot claim to love God if we do not love others: “for he who does not love his brother whom he has seen, how can he love God whom he has not seen?”

As we commemorate the repose of the Holy Apostle and Evangelist John, let us celebrate the great works that God worked through His beloved disciple, but most importantly, let us remember his simple – yet most profound – teaching as he approached his repose: “Little children, love one another.” In these days, which are so full of anger and judgment, unrest and discord, let us take hope that our fulfilling of this commandment of the Lord is truly all we need, truly “enough” for us.