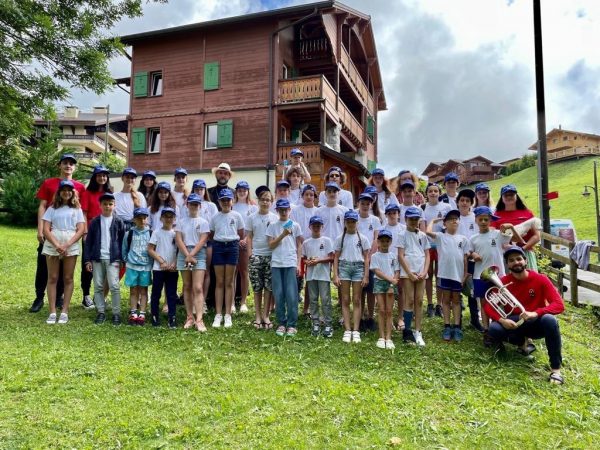 With the blessing of His Grace Bishop Irenei, every year the Diocesan communities and parishes in Switzerland open the doors to our children, to take part in a much-awaited annual event: summer camp!

This year, the summer camp – which is dedicated to St John the Wonderworker – was held in the beautiful mountain town of Leysan, Switzerland. Running for two weeks, from 5th to 18th July, 2021, some 38 children aged between 8 and 17 years took part.

Taking encouragement from the words of the former First Hierarch of our Church, Metropolitan Philaret, that “The Church is the future of our children!”, the goal of the St John summer camp has, from its beginnings several years ago, been to help our children grow spiritually and physically, providing them with encouragement in the development of their life in Christ. The camp is headed by Archpriest Emilian Pochinok, cleric of the Cathedral of the Exaltation of the Cross in Geneva, together with many helpers and assistants.

The mornings of a traditional “camp day” are filled with prayers, breakfast, sports, and a programme of activities tailored to the different age-groups of the children taking part. Spiritual instruction is at the heart of the camp’s life, teaching children how to pray at meals, to give thanks to God throughout the day, to participate in the Divine Services, etc. They are also exercised in community life: tidying their rooms and helping keep the camp clean, with awards for excelling in such service – awards sought by the youth with enthusiasm!

During the two weeks, the camp was punctuated by a number of special outings. At times the children went to the lake, to enjoy the beauty of the Alps, swim, and socialize; at other times they ventured to parks and natural wilderness in the region – which included ropes-courses, tree climbing and other activities. A special outing this year included a visit to a salt mine, where at a depth of 1,600 meters the youth learned about how salt moves from the earth to the table; and were rewarded for their adventure by tasting a signature treat: salted caramel sweets. Another special outing this year was to the St Bernard Museum, where the children learned about the famous dogs which have played a part in Swiss culture and folklore, and were able to meet and interact with some of the animals.

Each day beginning and ending with prayers, the Divine Liturgy was central to the spiritual life of the camp, and was prayerfully celebrated – and sung by the children – in the chapel of the camp’s grounds. Lessons on the Law of God were also regularly held. The children also learned more about their patron, St John, as well as SS Peter and Paul (whose joint feast fell within the camp days this year), and many of the local saints and historical figures of our Church.

Another special event this year was the visit of the Ruling Bishop, His Grace Bishop Irenei of London and Western Europe, via electronic means. For nearly an hour, Vladyka interacted with the children and staff of the camp via a large video screen erected in the hall, speaking to them about St John, about school, and offering his own reminiscences about being a summer camper. The children were able to ask questions, which, amongst more spiritual themes, also included the request for the Bishop’s opinion about the European finals football match, which was held during the camp period! At the end of their time together, the children rose to sing Many Years to their archpastor, who expressed his hope to be with them in person next summer.

The camp continued with outings to venerate the relics of local saints, as well as to sing prayers in our Diocesan parish of St Barbara the Great-Martyr in Vevey – the seat of the Diocesan Vicar Bishop, His Grace Bishop Alexandre of Vevey.

By a tradition that has developed over many years, the final day of the camp includes a farewell barbecue, with a campfire in the forest, with storytelling, photographs, and the chance to thank each other for the days spent together, and look forward to next year’s return to camp.

May God grant all the children and youth of our Diocese continued strength and joy in their spiritual lives!