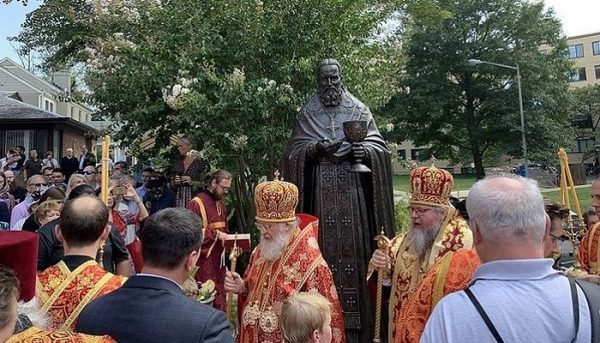 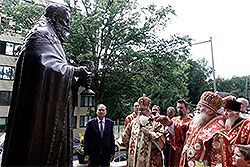 On Sunday, September 8, 2019, His Eminence Metropolitan Hilarion of Eastern America and New York led 70th-anniversary celebrations at St John the Baptist Cathedral in Washington, DC. The parish was founded by St John of Shanghai and San Francisco in 1949.

Metropolitan Hilarion celebrated Divine Liturgy, after which a procession of the cross circled the cathedral. The First Hierarch of the Russian Orthodox Church Outside of Russia then blessed a monument of St John of Kronstadt, erected on the 55th anniversary of his glorification by ROCOR. The 3-meter-tall bronze sculpture was erected near the entrance to the cathedral. A decree of blessing from the Synod of Bishops was then given to Anatoly Antonov, Russian Ambassador to the United States, in gratitude for his participation in bringing the monument to the US.

Ambassador Antonov congratulated the parishioners, noting that “memorializing one of the most revered saints in Russia here in the American capital is a bright event in the spiritual life of all Orthodox Christians in the United States. We hope that this will prove to be yet another step in the spiritual consolidation of our diaspora and the strengthening of its unity.” He added “now, for many of our compatriots who live far from Russia, it is the Church that is often their only island of the Homeland.”

Mitred Protopriest Victor Potapov, the Senior Priest of the cathedral, added: “On September 11, 1949, the feast day of the Beheading of John the Forerunner, St John of Shanghai celebrated the first Divine Liturgy in the new community in Washington. The liturgical life of our parish began with that service in a humble private apartment, later moving to the Resurrection Chapel of the Episcopal National Cathedral, and then to a house church. In 1958, this church was built, later rebuilt and consecrated in 1988. Now, thank God, we celebrate divine services in this splendid cathedral, built by the great efforts of a multitude of parishioners who have either departed to the next world or are still with us.”

“From this day forward, our parish will have a third heavenly patron named John. The first was John the Forerunner, Baptizer of the Lord, the second is St John of Shanghai and San Francisco, the parish founder, and now the All-Russian Pastor, St John of Kronstadt,” said Fr Victor.