Growing up as a Methodist, I never learned about St. Lucia, or St. Lucy. Oh, I heard the song “Santa Lucia,” but it seemed to be more about an island, or some place where the author lived. Even after becoming Orthodox, I didn’t encounter St. Lucy until I visited a Bulgarian Church and they happened to be celebrating the feast of St. Lucia. After Liturgy, we went to the parish hall where a young girl all dressed in white and wearing a wreath lit with candles came into the room while the people sang the song “Santa Lucia.”  She had three or four young girls as attendants and they were all dressed in white as well. They handed out small cakes to everyone and I experienced my first “lussekatter” or “Lucy cats.”  It was fun, but I still had no idea what it was all about. 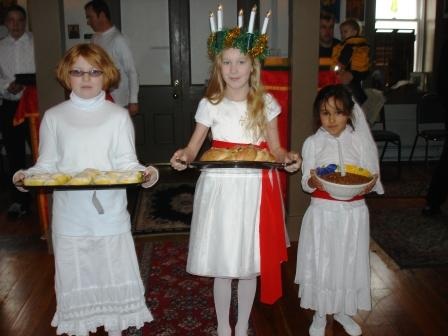 So, I took the time to read from the lives of the saints about this pious and courageous young woman. She lived in the late second and early third centuries in Sicily and gave much of her wealth to the poor. She was promised to a pagan groom but refused him and so he denounced her to the magistrate.  I read of her bold witness before the Roman judge and how no threat of torture of defilement could move her. In fact, when the men came to move her, she was so filled with the Holy Spirit that no one could move her. They tugged and struggled. They tied ropes to her hands and feet and many men worked together to pull her, but they could not. They lit fires around her, but she would not burn.  They finally wounded her when they tried to behead her, but she continued to speak until after she had received Communion. Then she gave her soul to God. It’s a truly remarkable story. 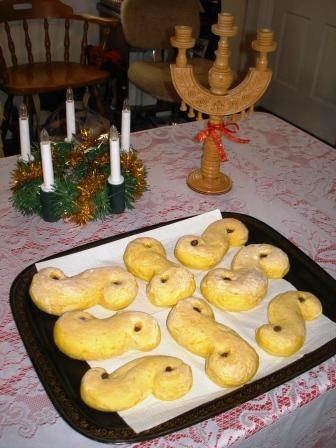 Well, there have been many remarkable saints and some we remember more than others. Some we celebrate yearly, and others we rarely celebrate. Why do we remember this faithful young virgin each year? The answer lies somewhat in her name. The root of her name is the same as the root for the word “light.”  The witness of St. Lucy overcame the spiritual darkness of her day as her name proclaimed her to be a child of light. The question remains as to why we celebrate her this time of the year.

We lived in the North of England for three years and that area is on a parallel with Hudson Bay, Canada. For people from Virginia, it was really far north. In the winter, it amazed us how quickly it would darken in the evenings. Well, according to the Julian calendar, Dec. 13 is the shortest day for light and longest for darkness. In Scandinavian countries and areas like Scotland, the evening darkness during this time of year can be deep and long.  Is it any wonder then that these people would venerate a saint whose very name meant “light?” In fact, even after the Reformation, many of the German Lutherans continued to have Lucy festivals and liturgies.

While the Gregorian calendar has moved this celebration to Dec. 26, her celebration helps us to rejoice in the light even in our darkest moments. Certainly, the balance between physical darkness and light is but a symbol of the balance between spiritual light and spiritual darkness. But isn’t it interesting that in the face of lengthening darkness, we want to celebrate?  So, in our celebration, St. Lucia visits us with lights like a halo around her head, dressed in the white of purity. In the face of the long darkness, she gives us….ah…pastry?

The Lucy cat is an interesting little cake. If you look closely it has the appearance of two eyes. We remember that Jesus told us how the eye is the light of the body. Yet, in the tradition of St. Lucy, her physical eyes were gouged out. Yet, she saw the light of Christ with her spiritual eyes. And so, in the Lucy Cats, she reminds us that we need to open our spiritual eyes so that we can also see the light and not fear the darkness.  During the longest night of darkness, and with a simple pastry, she tells us to have faith and to rejoice and sing. As St. John wrote: And the light shined in the darkness, and the darkness could not overcome it (John 1:5). 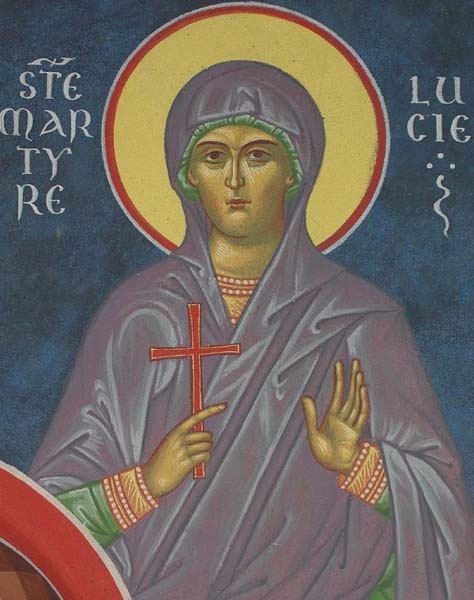 St. Lucy, pray for us who have eyes but do not see, for we fear the darkness!

Now for a Lucy cat!