The First Witness of the Resurrection: On St. Mary Magdalene

Source: Orthodox Praxis
There is mistaken idea that Mary was a prostitute before she met Jesus. This is not true! There is a tradition that Mary Magdalene led such a chaste life that the devil thought she might be the one who was to bear Christ into the world, and for that reason he sent seven demons to torment her.
Dn. George P. Bithos | 04 August 2014 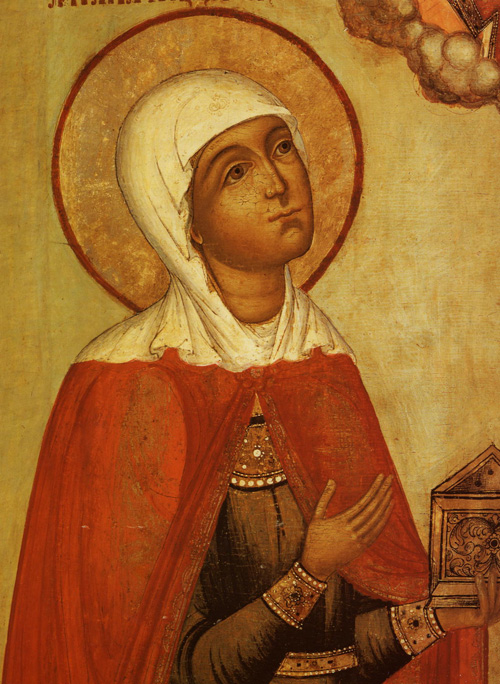 July 22/August 4 is the Feast Day of St. Mary Magdalene. I believe that Mary is one of the most interesting of our saints. She is a woman of great theological significance, but she is not well documented in history. The Tradition of the Church, gives us a good bit to think of concerning this special person.

She carries several “titles” in the Church usage. She is known most of all as Mary Magdalene. With this, we know she came from a town named Magdala. This city was located on Lake Gennesaret (”a garden of riches”), which is another name for the Sea of Galilee or Lake Tiberias. Geographically the town would be located presently north-west of Haifa, Israel near the Golan Heights. This places her town north of Nazareth.

Mary also carries the titles of “Apostle to the Apostles, Equal to the Apostles and of course Myrrh-bearer” There is mistaken idea that Mary was a prostitute before she met Jesus. This is not true! There is a tradition that Mary Magdalene led such a chaste life that the devil thought she might be the one who was to bear Christ into the world, and for that reason he sent seven demons to torment her. The first time Mary is mentioned in the Gospels is St. Luke 8,1-3; Christ freed her from these demons and she followed him thereafter. She is considered one of the Galilean disciples. We see her prominently in the Passion narratives. She followed Jesus to Jerusalem and was steadfast at the foot of the Cross with The Virgin Mary standing by Jesus in His darkest moments. She figured importantly in the post-resurrectional accounts. She is the first person to see the Risen Lord, whom she saw twice, she spoke to Him near the tomb, She was the first to announce the Resurrection. The privilege of being the “first” witness of the resurrection that was granted to Mary by the Lord is something that twentieth century sensibilities need to absorb. In the time of Christ, women were not considered creditable witnesses. They were not allowed to give testimony, only men were considered believable. Yet to Jesus this didn’t matter. He trusted these disciples, these women disciples to deliver the greatest news in the history of the world. She had seen Jesus die on the Cross, seen Him buried, seen the great stone set at the door, seen the guard posted at the door of the tomb, her tears were shed for her teacher, she saw a stranger in the Garden, until she heard a familiar voice call her name. She then saw Him resurrected and glorified. Joy overcame sorrow! As Jesus instructed her, Mary Magdalene found the other disciples. She was a member of the inner circle; she was trusted by them and when she delivered the message, “I have seen the Lord” (John 20,18) they did not believed her. Jesus had to appear to them and upbraid them before, even her friends, would believe such news.  The other appearances of Jesus are well documented in the Gospels.

After the Ascension and Pentecost, Mary travelled from Jerusalem to Rome where she announced the resurrection. One tradition concerning Mary Magdalene says that she used her position to gain an invitation to a banquet given by Emperor Tiberius. When she met him, she held a plain egg in her hand and exclaimed “Christ is risen!” Caesar laughed, and said that Christ rising from the dead was as likely as the egg in her hand turning red while she held it. Before he finished speaking, the egg in her hand turned a bright red (for more details, see Wikipedia). Each time we answer, “Truly, He is Risen!” we should think of Mary. After many years evangelising across the Mediterranean area, she travelled to Ephesus where she joined St. John the Evangelist and her friend, the Virgin Mary, the Theotokos. There she died peacefully. During the second Patriarchate of St. Photios the Great, he had her relics transferred to the Queen City (Constantinople).

The Risen Lord Appears to Us…
Archpriest Alexander Men (+1990)

Christ, risen invisibly, appears tangibly to each person. In the lives of each of us who…