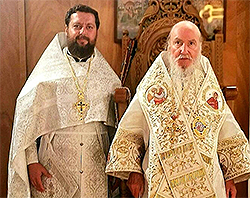 Another church has left the jurisdiction of the Patriarchate of Constantinople and joined the Russian Orthodox Church Outside of Russia because of Patriarch Bartholomew’s actions in Ukraine.

A number of churches in Europe and elsewhere have done the same since the creation of the schismatic “Orthodox Church of Ukraine” in late 2018. Conversely, a church in Amsterdam and another in Udine, Italy, have moved from the Russian Church to Constantinople since the start of the war in Ukraine.

Archpriest Sladan Vasic reported on Sunday that he and his Church of St Nicholas in Modling, Austria, are, as of August 18, 2022, under the omophorion of His Eminence Metropolitan Mark of Berlin.

According to the priest, the parish made the decision in response to Constantinople giving a tomos to “unrepentant schismatics” who persecute the canonical Ukrainian Orthodox Church under His Beatitude Metropolitan Onuphry of Kiev and All Ukraine.

The parish therefore stands with the majority of autocephalous Local Churches, he emphasizes.

“We didn’t agree with the obvious non-canonical claims of the Phanar, which threaten the ecumenical unity of the Orthodox Church. We didn’t want to get into a situation where we would have to serve with unrepentant schismatics and all unanimously decided to go under the omophorion of Metropolitan Mark, even at the cost of persecution, to which I am personally subjected daily,” writes Fr Sladan.

“What right does the Greek Metropolitan Arsenios have to declare war on me and my parish (as he literally said)? Just because we disagree with the uncanonical actions of Patriarch Bartholomew?” the priest asks, noting that he hasn’t committed any immoral acts, spread heresy, or served with schismatics, as does Constantinople.

“It’s not unknown that the Phanar has been living in an unreal world for a long time,” Fr Sladan says. “They were the first to trample on the canonical tradition, then they give lessons to others. It’s a tragicomedy,” he writes, adding that Metropolitan Arsenios tries to impose himself as the head of all Orthodox Christians in Austria, “even though there are many other jurisdictions there.”

He also notes that since the beginning of the war, refugees have found spiritual care in his parish, and together with these Ukrainians, they all pray for the unity of the Church, but not for unity with the “unrepentant Dumenko schismatics.”