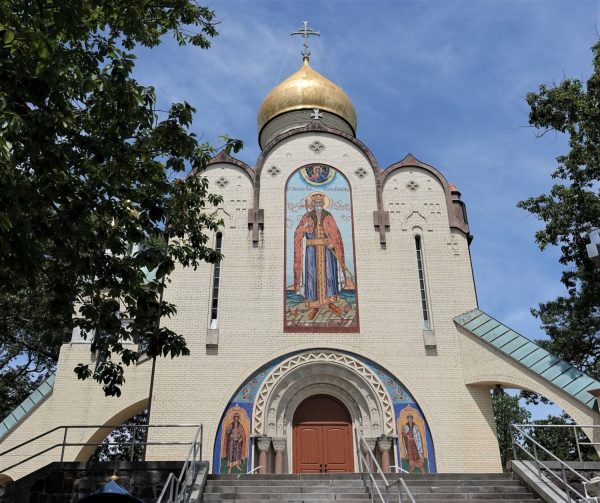 On July 31, 2022, the 7th Sunday after Pentecost and of the Holy Fathers of the First Six Ecumenical Councils, the annual St Vladimir’s Day Celebrations, dedicated to the Baptism of Rus’, were held at St Vladimir Memorial Church in Jackson, NJ. His Eminence Archbishop Gabriel of Montreal and Canada celebrated Divine Liturgy, co-served by His Eminence Archbishop Peter of Chicago and Mid-America and His Grace Bishop Nicholas of Manhattan.

Singing beautifully at the divine services was a joint choir of parish singers and members of the Hierarchal choir of the Synodal Cathedral in New York City, under the direction of conductor Vadim Gan.

The celebrations were held under the aegis of the honored copy of the wonderworking Pochaev Icon of the Mother of God, which had been brought from Holy Trinity Monastery. The church was filled with worshipers, parishioners and guests who had come to pray from neighboring parishes and nearby states. Virtually all communed of Christ’s Holy Mysteries.

Archbishop Gabriel greeted everyone with the feast of the church’s patron saint, the Holy Great Prince Vladimir, who is traditionally commemorated here on the last Sunday of July as well as on his feast day. He reminded them how the saint chosen the Orthodox Faith, having become acquainted with Christianity through his grandmother, the Great Princess Olga. After he was visited by emissaries from Constantinople, he ultimately made the decision to be baptized himself, and to have the Russian people baptized.

The hierarch compared Prince Vladimir to the Apostle Paul, who had been a persecutor of Christians who heard the voice of God, converted to Christianity, and received his sight. Likewise the holy prince, having been a pagan, upon exiting the holy font, regained his sight not only physically, but spiritually, and understood the power of God, the power of Christianity.

His Eminence called on the faithful to pray to St Vladimir, that he might help us also to know the Faith and to prevent the shedding of blood.

The clergy and faithful then went in procession around the memorial church and performed the traditional moleben and blessing of the water.

Participants of the celebrations were treated to a festal luncheon in the church hall and outdoors. Instead of the usual July heat, the weather was beautiful. Meat was grilled outside, sold alongside homemade baked goods and desserts. People interacted and shared recollections of the St Vladimir’s Day Celebrations of years past.