Strange That Our Money Says: In God We Trust 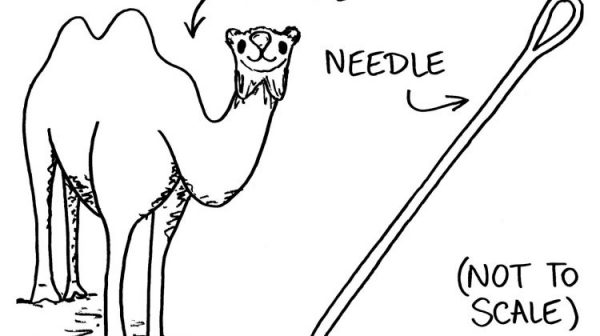 There are two great money problems in the Scriptures: too little and too much. The theme of the poor is a constant throughout both the Old and the New Testament. They tend to be cast as victims – easy prey for the rich, often exploited, and particularly beloved of God. He is the protector of the “widow and the fatherless” and clearly favors the poor. The rich come in for scathing treatment and dire warnings. Christ’s own words regarding the rich and the difficulty of their salvation almost drove the disciples to despair. And yet, most people in modern culture imagine wealth to be the solution to problems. Half of all lottery tickets in America are bought by the poorest third of the population.1

Perhaps more shameful is the fact that, today, the rich judge the poor to be foolish for such behaviors.

The most powerful creation of modernity is the Middle Class. Largely unintentional, many components of the Industrial Revolution served to nurture and increase the size and importance of those whose income exceeded their necessities with an increase in the market for luxury goods and practices. In time, that same class managed to increase the voting franchise, eventually extending it to include the whole population. With this prosperity came a shift in how the culture of Christianity perceived wealth itself. From a suspect burden to be shared, it became a mark of success to be enjoyed.

At present, our culture has been so transformed by the ideal of the Middle-Class phenomenon, that it has become synonymous with what is “normal,” “moderate,” “standard,” and “expected.” While there are debates within the Middle Class about the right way to think about the Upper Class and the super-wealthy, no one seems to question the desirability or normalcy of the Middle Class itself.

Among the most striking changes in the Christian attitude towards money has been the evolution of understanding regarding charging interest: classically known as “usury.” Today “usury” is used only to describe outrageous percentages on borrowed funds. Originally, however, “usury” referred to all use of interest on borrowed funds. It was a forbidden practice in Christianity in its early centuries, a violation of the teachings of Christ. This remained the case until the early Reformation when its modest practice began to be allowed.

With the standardization of the Middle Class within Christian consciousness came a standardization of Middle-Class attitudes towards wealth and property. The notion of “private property” became enshrined in Christian thought, replacing the concept of stewardship (in which everything belongs to God, and we are each accountable for our use). Individualism, as we know it today, requires the Middle-Class world as a standard: the poor simply cannot afford such independence. Individualism also requires a strong sense of private property so that each of us may pretend that we are self-sufficient. It may well indeed be the case that the greatest delusion of the modern age is that associated with our economic consciousness.

Consider these words from the opening paragraph of St. Clement of Alexandria’s Who Is the Rich Man Who Shall be Saved?

Those who bestow laudatory addresses on the rich appear to me to be rightly judged not only flatterers and base, in vehemently pretending that things which are disagreeable give them pleasure, but also godless and treacherous; godless, because neglecting to praise and glorify God, who is alone perfect and good, “of whom are all things, and by whom are all things, and for whom are all things,” they invest with divine honours men wallowing in an execrable and abominable life, and, what is the principal thing, liable on this account to the judgment of God; and treacherous, because, although wealth is of itself sufficient to puff up and corrupt the souls of its possessors, and to turn them from the path by which salvation is to be attained, they stupefy them still more, by inflating the minds of the rich with the pleasures of extravagant praises, and by making them utterly despise all things except wealth, on account of which they are admired; bringing, as the saying is, fire to fire, pouring pride on pride, and adding conceit to wealth, a heavier burden to that which by nature is a weight, from which somewhat ought rather to be removed and taken away as being a dangerous and deadly disease.

For Clement, wealth is a “dangerous and deadly disease!” I recall hearing someone remark about this, “I wish I could catch it!”

St. Clement is not unusual in his attitude towards money. He is an exemplar of pretty much everything written on the topic in the first ten centuries or more of the faith. Like Christ, he gages his thought by what money (property, etc.) does to the soul.

“What does it profit a man to gain the world and lose his soul?” Christ asks.

This is said regarding money and property, specifically, rather than just “sin” in general. There is something about money/property that has the power to utterly corrupt the soul. A key, I think, is found in Christ’s aphorism regarding “Mammon” (money): “You cannot serve God and Mammon.” Wealth has a power within it that draws us into idolatry. We begin to place our faith and trust in what wealth can do while remaining distant from God. God may have “top-billing” in our intellectual universe, but run a distant second when it comes to what we most desire.

This takes us back to St. Clement’s diagnosis of money as a “dangerous and deadly disease.” It should not be surprising that the dominant force within a secular culture is economics. The pretense of the world’s self-sufficiency can only be maintained by the delusions created by wealth. Agnosticism and Atheism are the religions of the rich (or the Middle Class). It is a philosophy that safeguards the inherent power of their position. I should add that secularized Christianity can be described as “Christian Atheism.” [footnote] Those who would challenge this analysis by pointing to the Communist revolutions of the last century, fail to note that the ruling class within those regimes quickly adopted both the power and wealth of the class which they overthrew. A new ruling class claimed to govern in the name of the poor, but its identification with the poor was in name only.

Historically, the most significant group to maintain some semblance of sanity (outside of the poor) were the monastics of the Church, although any number of monastic establishments actually became quite rich. Institutional battles over monastic property have almost always been won by those with money (in Russia, the Possessors triumphed over the Non-Possessors, and, in the West, the Franciscans became sufficiently reconciled with wealth to pass under a dangerous Papal radar).

Virtually all the modern arguments regarding wealth (certainly among Christians), presume that we have some say in the matter, that is, that wealth belongs to us and that it is our responsibility to arrange its disposition. We place ourselves into the realm of management and move one step closer to the practical atheism of secularity. The poor are generally lacking in economic theories.

The great tragedy, however, is the perversion of the gospel in which, as managers, we decide how best to run the world. This represents a radical shift away from both Old and New Testament. It will undoubtedly be argued that we are commanded to be good stewards and that proper management of wealth is a God-given commandment. Jesus did not offer the parables of the Kingdom in order to create a responsible Middle Class. When the stewards of the parables are transformed into the managers of this world, Christ’s teaching has been tamed and made to serve the Prince of this World.

No matter our thoughts on the subject, the general landscape of a certain portion of the world is utterly married to wealth and property. Christians who live in such societies will most likely continue to find ways to accommodate the gospel. And this, I think, is our great loss. The managers of this world will find that the Kingdom of God is not compatible with their goals.

“He has exalted the humble and meek and the rich He has sent away empty.”

My own take regarding this is that we should pursue a persistent generosity and resist our urges towards ever greater ownership. A simple means of renouncing wealth is to confess that we own nothing, but only have the use of our goods for a short time. The Christian attitude towards wealth in the early centuries threatened the very halls of empire. The gospel has not changed.