Source: The Christian Post
Anugrah Kumar | 07 March 2017
Numerous Syrian Muslims who fled their war-torn country and found refuge in Lebanon have converted to Christianity despite threats and incidents of attacks on new converts, according to a report. 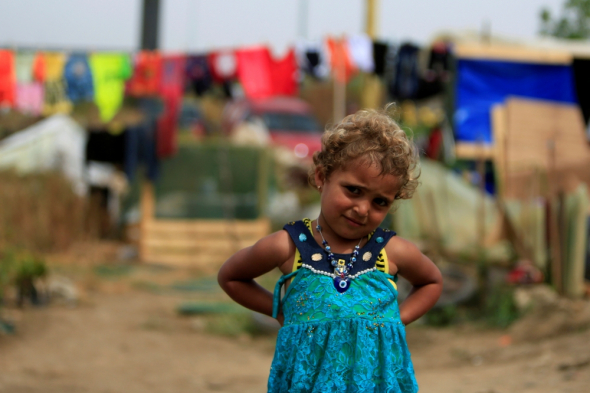 Photo: REUTERS/Ali Hashisho. A Syrian refugee girl poses outside tents during the visit of Dutch Prime Minister Mark Rutte to the refugee camp in Zahrani village, southern Lebanon May 3, 2016.
George Saliba, Bishop of Syrian Orthodox Church in Lebanon, said he has baptized around 100 Muslim Syrian refugees since the start of the civil war in Syria in 2011, according to USA Today.

Abu Radwan, who fled the city of Homs in Syria and was baptized by Bishop Saliba in Beirut, was quoted as saying that Jesus appeared to him in a dream two years ago. “I started going to the church. I believed that Jesus was coming to help us, to save us.”

Bishop Saliba said the church accepts converts only after confirming that their faith is genuine.

Muslim refugees are turning to Jesus despite it being extremely risky. Radwan was once stabbed while he was coming home from the church. The attackers were Syrians from his own tribe. His wife still wears a hijab outside of church for her safety.

An evangelical church in Beirut, which was not identified due to safety concerns, also has several Syrian converts, according to the report.

“When I see a person wishes to be Christian, I don’t stop him, but we try to test him,” the pastor was quoted as saying.

The Constitution of Lebanon provides for religious freedom. However, thousands are coming to Christ across the Middle East, Voice Of the Martyrs Canada, which runs radio shows in the region, said in January.

“We are in regular contact with our FM stations in Iraq and have talked with many people who have family in the Middle East. Some of our Middle Eastern broadcasters have shared testimonies [about many turning to Christ] with us, which they hear directly from listeners when visiting there …”

Muslim refugees in Europe have also converted to Christianity.

A June 2016 article from The Guardian noted anecdotal data of rising Christian church attendance in Europe by Muslims.

Trinity church in the Berlin suburb of Steglitz, for instance, saw its congregation rise from 150 to 700 due to new Muslim converts, while the Austrian Catholic Church saw its applications for adult baptism swell by nearly 70 percent in the first three months of 2016.

“I found that the history of Islam was completely different from what we were taught at school. Maybe, I thought, it was a religion that began with violence,” an Iranian convert, 32-year-old Johannes, was quoted as saying. “A religion that began with violence cannot lead people to freedom and love. Jesus Christ said ‘those who use the sword will die by the sword.’ This really changed my mind.”

More churches in Germany reported this growing phenomena in December 2016, with The Independent noting that Muslims, especially Iranians, are seeing Christianity as a new chance at freedom.

“A lot of them come to Germany and think, here I can choose my religion and I want to choose a religion of freedom,” Matthias Linke, a priest from the Evangelical-Freikirchlichen Gemeinde in Berlin, was quoted as saying. “For many Iranians that I’ve baptized, Christianity is the religion of freedom.”

Last year, the founder and CEO of SAT-7, a Christian satellite network that reaches out to refugees fleeing war-torn Syria and Iraq, said many Muslim families are turning to Christianity, where they encounter a message of peace and love.