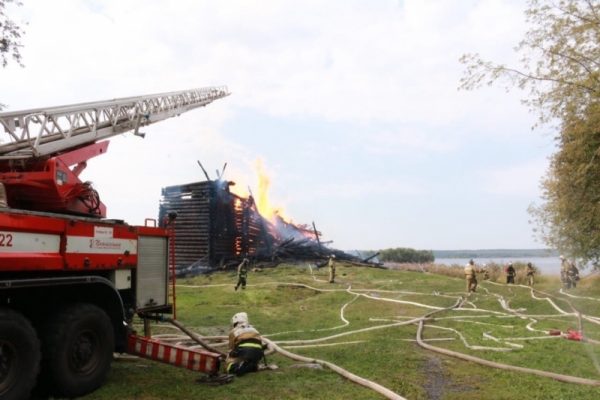 Petrozavodsk, August 13, Interfax – A teenager is suspected of setting fire to the Uspenskaya (Dormition) Church in Kondopoga (Karelia), a wooden church dating back to the 18th century, which was destroyed by fire last week, an informed source told Interfax.

“A 15-year-old student is suspected. He identifies himself as a Satanist. Says that he simply didn’t like the church,” the source said.

The head of the regional branch of the Emergency Situations Ministry, Sergey Shugayev, told Interfax the church started burning from the outside.

“The fire started spreading from the northern side of the church, so the church warden didn’t notice it immediately,” Shugayev said.

The restoration of the church would cost about 80 million rubles, according to Tatyana Vakhrameyeva, a conservation architect and a member of the expert board of Rosokhrankultura, the Russian federal service that monitors compliance with cultural heritage protection law.

The teenager will be examined for sanity, the local department of the Russian Investigative Committee said on Monday. “A forensic inpatient psychological and psychiatric examination has been ordered to determine the teenager’s competency to stand trial. In light of the suspect’s age, he has been placed at the provisional center for teenage offenders of the Republic of Karelia’s branch of the Interior Ministry,” it said.