Source: Basilica.ro
For the sixth year in a row, tens of pilgrims travel across Romania from the northern parts of Maramures and Satu Mare to attend the celebrations of Saint John Chrysostom at the Chapel of the National Cathedral in Bucharest.
Aurelian Iftimiu | 15 November 2019 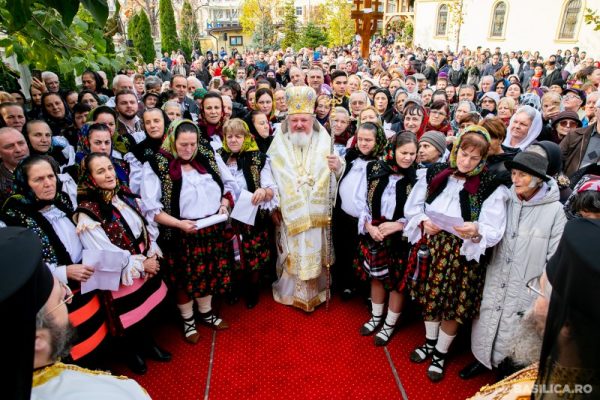 Children and adults dressed in colourful folk costumes attended the all-night vigil and the Divine Liturgy honouring St John Chrysostom next to the new Orthodox Cathedral in Bucharest where a particle of the Saint’s relics is kept.

On Wednesday, November 13, the patriarchal auxiliary bishop Varlaam of Ploiesti presided over the Divine Liturgy at the chapel’s outdoor altar.

In his homily, His Grace briefed the life of Saint John Chrysostom, highlighting his pastoral and missionary work that gave the Saint two surnames: Golden Mouthed and the Ambassador of the poor.

‘He was named Golden-mouthed since his life for his talent, but also for the beauty and depth of his words that the believers listened and considered as entirely of gold,’ His Grace said.

Bishop Varlaam noted that although the Saint’s sermons lasted no less than two hours no Christian left the congregation because of boredom.

“The faithful went home to feed their children and returned to the church to listen to St. John Chrysostom for two or three hours. His speeches were so beautiful, uplifting, and profound.”

His Grace stressed the importance of the works of St John Chrysostom, which are translated into Romanian, calling them ‘a genuine spiritual treasure.’

Ambassador of the poor

The preaching of St. John Chrysostom had always a moral dimension. ‘He always wanted that his congregation be comprised of people who not only know the Christian teaching, but also practice it.’

The love of God must be manifested in the love for the poor, the sick and strangers, the bishop explained.

Saint John Chrysostom was named the Ambassador of the poor because of his close attention to the disadvantaged.

At the end of the Divine Liturgy, the pilgrims who came from northern Romania sang a hymn to St John Chrysostom.