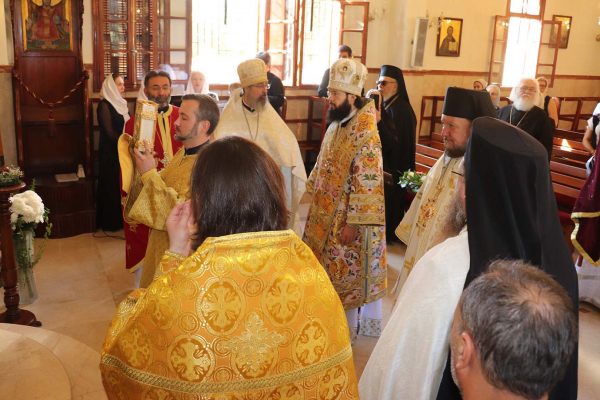 On November 6-9, 2021, with the blessing of His Holiness Patriarch Kirill of Moscow and All Russia, the 75th anniversary of the establishment of the Beirut Representation of the Russian Orthodox Church is celebrated in Beirut.

On November 6, the St. Demetrius Parental Saturday, Patriarchal Exarch for Western Europe and head of the Moscow Patriarchate office for the institutions abroad Metropolitan Anthony of Chersonesus and Western Europe celebrated the Liturgy for the Repose of the Souls of the Dead in the church of St. John the Baptist in Beirut.

The liturgy was celebrated in Russian and Arabic. Liturgical commemoration was made for the deceased rectors and parishioners of the Representation.

In his sermon, Archpriest Vladislav Tsypin reminded the congregation that the name of the commemoration of the dead is connected with the victory of the Holy Prince Dmitry Donskoy and his troops in the Battle of Kulikovo, noting that the Lord awaits a feat from each Christian.

After the Divine Liturgy, Metropolitan Anthony of Chersonesus and Western Europe addressed the congregation, greeting the Representation community and the guests. He conveyed to participants a blessing and best wishes from His Holiness Patriarch Kirill of Moscow and All Russia.

“I would like to express the feeling shared by the guests who have come to celebrate the 75th anniversary of the Beirut Representation – representatives of the Russian and Serbian Churches and the Orthodox Church of the Czech Lands and Slovakia – for the opportunity today to be here in the blessed land of Lebanon and to take part in celebrating the anniversary of the presence of a representation of the Russian Orthodox Church in Lebanon”, the archpastor said.

His Eminence Anthony thanked the rector of the Representation, Archimandrite Philipp (Vasiltsev) for this work to organise the festivities and said, “Being aware that this celebration is taking place in hard days not only for the whole humanity – as unfortunately the fatal diseases is still spreading and making such a deep impact on our lives – but also for the Lebanese state, we can also see in our visit an opportunity in these moments of trials to support the fraternal Lebanese people and our sister Orthodox Church of Antioch. During the Divine Liturgy today, we lifted up an ardent prayer for peace, welfare and prosperity of this remarkable country”. He reminded the congregation that a prayer for Lebanon and its people is invariably lifted up in the Beirut Representation of the Russian Orthodox Church.

“These days we will have an opportunity to reflect on the significance of our Representation not only for the pastoral care of our compatriots who are present here among the numerous flock, but also for maintaining sister relations between our Local Churches”, he said.

In his response, Archimandrite Philipp thanked the guests for coming. He noted that the divine service celebrated by Metropolitan Anthony opens the celebrations of the Representation’s anniversary and stressed, “The seventy five years, as many organisers and participants have noted, is a diamond jubilee – the time when we can sum up the work and service of the already several generations of clergy, parishioners and staff of our Representation. In each church of the Russian Orthodox Church abroad, the 20th century tragic history of our Motherland is reflected. The Representation in Beirut is not an exception. It was also the first wave of the Russian emigration in which many of our emigres found their second motherland in Lebanon in the 20s and 30s. It is also the post-war emigration and our new parishioners now comprise the basic membership of the Representation community. These are people with sometimes difficult fates, people who know how to defend and preserve their faith”.

“As we live within the folds of our sister Church of Antioch, it is very important for us that this anniversary is fully shared, supported and attended by the representative of the Orthodox Church of Antioch to His Holiness Patriarch of Moscow and All Russia, Metropolitan Niphon of Philippople born in the Lebanese city of Zahle, a glorious son of the Lebanese people”, he continued, “It is very important for us that this anniversary is supported by His Eminence Elias, Metropolitan of Beirut, who has sent his representative to our celebrations. The anniversary celebration is attended by representatives of sister Local Churches – His Eminence Anthony, the Very Reverend Archimandrite Seraphim. Thus, the celebration of the seemingly small Representation becomes a feast for the whole Orthodox Church. For us, it is a great support”.

“We are very much delighted in having His Eminence Anthony as head of our celebrations with a blessing of His Holiness Patriarch Kirill. I am glad to greet you on behalf of our community in the sacred land of Lebanon, in which many saints and apostles preached, which was visited by the Saviour Himself”, Archimandrite Philipp said addressing Metropolitan Anthony of Chersonesus and Western Europe.

The rector of the Representation also stressed, “Your Eminence, you were quite right to say that the whole world and especially Lebanon are going through difficult times. It is an economic collapse and a terrible crisis, and a mortal disease. It would seem that there is nothing to celebrate. But it was the common wish of our community that we should celebrate this anniversary, in which we see great support for the whole Orthodox community of Lebanon”.

For the memory of the anniversary Archimandrite Philipp presented Metropolitan Anthony of Chersonesus and Western Europe and Metropolitans Anthony of Moravici and Niphon of Philippople with decorative slices of the cedar of Lebanon with a commemorative inscription on the 75th anniversary of the Beirut Representation of the Russian Orthodox Church.

The Russian Beirut Representation was established in 1946, a year after the visit of a delegation of the Russian Orthodox Church led by His Holiness Alexis I, Patriarch of Moscow and All Russia, to the Middle East. In response in 1948, the Patriarchate of Antioch was given the church of Archangel Michael in Moscow. The opening of the representations served to strengthen relations between the Orthodox Churches of Antioch and Russia.

At present, the Russian community has no church of its own in Beirut. Divine services are celebrated in the cemetery church of St. John the Baptist given by the Parish of St. Elias of the Metropolis of Beirut of the Patriarchate of Antioch and in the church of the Annunciation of the Most Holy Mother of God at Jul El Dib.

The Representation community is multinational; it consists of natives of the countries-canonical territories of the Moscow Patriarchate. Altogether, there are about 50 thousand Russian-speaking people in Lebanon.