The Body and Blood, and What Kids Believe 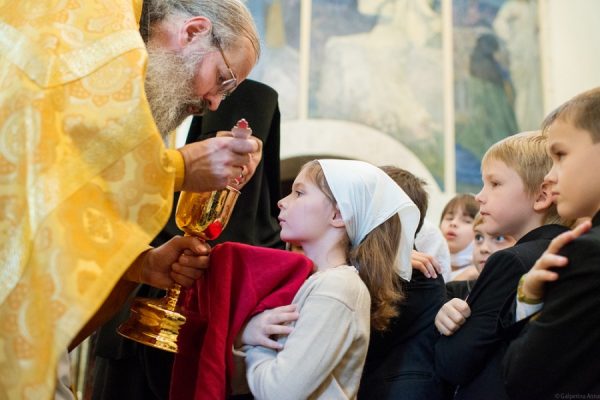 I recently received a great question in the Raising Saints inbox, and thought it might be nice to share the answer here!

Hi, Elissa – I am wondering if you have any tips for teaching young children (8yrs old, or so) about how we understand the Eucharist as the literal body and blood of Christ; that when we partake, we are literally consuming His body and blood… For obvious reasons, this is proving difficult for me to explain… Thank you!

That really is a tricky conversation, especially with an 8 year old. Kids can be very concrete thinkers during certain developmental stages of life, and it can be hard to explain that while they cannot see that it’s Christ’s body and blood in that chalice, it really and truly is.

Of course, it’s ok if they doubt it. It’s ok if an 8 year old looks skeptically at you, and spends some time contemplating whether he or she can really appreciate and endorse the idea that somehow, they are taking in bread and wine AND they are taking in the body and blood. That’s a lot to wrap our minds around; it’s a great and holy mystery. It deserves reflection and consideration, and that may take a while. We can be patient.

But if you find yourself in that conversation, here are some things you might submit for their consideration.

We recognize that this is a rather troubling idea: you are eating the body and blood of Jesus Christ, who was a real human (fully God, fully man) and who had a body and who walked this earth. You are eating His body and his blood. That’s troubling and remarkable.

In fact, it’s so troubling that in the early days of Christianity, people who heard Christians saying that they were consuming Christ’s body and blood thought they were cannibals. (They also heard Christians calling each other ‘brother’ and ‘sister’, because we are all brothers and sisters in Christ, and thought that we were marrying our siblings in a gross display of incest… for a simply worded and amusing look at these issues, check out Why Early Christians Were Despised.)

Of course, we’re not cannibals:  we do not carve up a human body, but rather we offer up bread and wine and God transforms it into the body and blood of Christ, so that we can literally take Jesus Christ into our real, physical bodies.

There’s always a physical manifestation, because God created us and He knows us. He knows that we are not just minds floating in the universe — we are both body and soul, we are truly physical beings. He didn’t just come to us metaphorically or spiritually, but He took on flesh and walked among us. He continues to reach out to us physically even now.

So we don’t just say that we want Christ to live metaphorically in our hearts — we receive Him physically in our bodies. God comes to us, God transforms that bread and wine, so that He can truly become a part of us. Literally.

So why doesn’t He show Himself in that chalice?  Because that would be gross. It’s a kindness to us. You might share the following stories, originally told by Fr. Nikon of Mt. Athos in 2014, with your kids:

THE MIRACULOUS POWER OF THE BODY AND BLOOD OF JESUS CHRIST

Fr. Nikon tells us the following story. A priest from one of the provinces in Greece visited him one day. He had many years of priestly experience. Because of the confidentiality of the sacrament of confession his name cannot be revealed. He said that during all those years in the priesthood he did not feel like something special was taking place during the Divine Liturgy. Specifically, he said that he did not believe that the bread and wine during the Holy Eucharist were changed into the very Body and Blood of Jesus Christ. His question was: could it be simply a symbolic thing? Is it reality? Why do I not believe? Fr. Stephanos, his confessor, told him that God knows why He does not reveal these mysteries to us. He does this either because we are unworthy or because of our egos, because of our passions or maybe because we could not endure seeing the reality of this great mystery. This priest left and after three months he visited me again and I could not believe how terribly he looked. His face looked white with fear and he had lost a lot of weight. He revealed to me what happened to him after he left our Monastery.

During his first Divine Liturgy following confession at our Monastery, on the Feast Day of St. John the Evangelist, something very dramatic happened to him during the Divine Liturgy. Right after dispensing Holy Communion to the faithful in the Church and saying the prayer “God is lifted up into the heavens and His glory fills the whole earth” he was filled with fear and trembling as he saw before him the following phenomenon. The consecrated elements in the chalice were bubbling. What I saw coming up out of the chalice was raw flesh and blood spilling over onto the altar table. Upon seeing this, the priest fainted. The Church sexton came running up to help the priest. The priest was brought around by the sexton after he called 911 for an ambulance. He thought that the priest had possibly suffered a heart attack.

When the priest came around he asked the sexton what he saw in the chalice. He responded that everything was normal, it contained just the bread and wine. The priest then got up with difficulty saying over and over again “Lord I believe, I believe” while trembling. He then concluded the Divine Liturgy. (It is customary for the priest to consume the consecrated bread and wine that remains in the chalice after giving communion to the faithful). Having experienced such a vision of the real presence of the Body and Blood of Jesus Christ, he did not know whether or not he could consume the elements in the chalice. Sweating profusely, after some time he managed to finally consume the elements that had by now returned to their natural state of bread and wine. He asked his father confessor if he would receive mercy after so many years of unbelief. A month later he offered his resignation saying he could no longer perform the Divine Liturgy. He took a position in an office of the Metropolis of his Diocese. We must live these things in order to believe in them.

Fr. Ephraim of Philotheou Monastery was with Fr. Nikon when the Monastery phone rang. Fr. Ephraim questioned whether or not he should answer the phone. He answered it and there was a woman on the line and she was very agitated. She was talking loudly and excitedly. Fr. Ephraim kept interrupting her saying to her “didn’t I tell you to be patient, have faith and God would answer your doubts.” When Fr. Ephraim was finished with the conversation, I asked him, if it was not a question of confession why was the woman so upset. He told me that the woman was a teacher from Epirus. She was a member of the Old Calendar Orthodox Church. She kept complaining to Fr. Ephraim that Orthodox priests of the New Calendar do not dispense divine grace. These priests have betrayed the faith. They have joined the Pope of Rome. The Patriarch of Constantinople is a heretic because he embraces the Pope. The priests of the New Calendar do not have the true priesthood. On hearing this, the Elder said to her, no my child, it is not like that. Our priests dispense divine grace. He then advised her to fast and pray for three days and then attend a New Calendar Church to receive Holy Communion.

She did as she was told and received Holy Communion from a New Calendar priest. He also said to her: “if, as you say the priest does not have divine grace you do not have anything to lose, you will simply consume a little wine and bread. I see that you have sincere conviction about the Church, about Jesus and about His Holy Mother. They will help you to understand as I have explained it to you.” After she received Holy Communion and went back to her place in the Church, she suddenly realized that there was something strange about the communion in her mouth. It felt strange because it was like chewing on a piece of plastic. She then retrieved the piece of communion from her mouth with her fingers. When she looked at it she discovered that it was raw flesh and her fingers were covered in blood. Upon seeing this she started yelling and screaming: “Jesus have mercy on me. Holy Mother of God forgive me.” The faithful ran forward to help her and they realized at that moment that a miracle had taken place. They told the woman to place the communion back in her mouth and not to be afraid. She finally placed the communion in her mouth and it returned to the natural elements of bread and wine. This is the power of our Orthodox Church.

(Find this and the rest of Fr. Nikon’s stories on the sacraments at OrthoChristian.com)

Most viewed articles
What Is Rejected Becomes the Cornerstone121
Hierarch of the Jerusalem Patriarchate Speaks in Support of His Holiness Patriarch Kirill92
The Forgotten Virtue of Stability90
Utah Church Prepares, Welcomes All for Consecration89
His Beatitude Patriarch Theophilos III and bishops of the Russian Church Abroad attend a concert marking the 150th anniversary of the birth of Sergei Rachmaninoff in Jerusalem86
The Savior of the Hopeless, or Is It Possible to Be a Good Person and Not Be Saved?73
Supreme Court Overturns Roe v. Wade in Mississippi Abortion Ruling66
‘The post-Roe generation’: Pro-lifers set their eyes on heartbeat bills, chemical abortion bans64
Most popular authors
Pravmir.com team267
Archpriest John Moses (+2019)121
Hieromonk Gabriel90
Alexander Tkachenko73
CBN News66
Ryan Foley64