The Body and Blood of Christ

Those of us fortunate enough to be nourished frequently by the Holy Liturgy will perhaps find it difficult to recall just how strange it is to aspire, and indeed be commanded, to eat of the Body and Blood of Christ. Mysterious grace, peace, and healing so wonderfully flow to us in Holy Communion that it may never occur to us to wrestle with what, for many non-believers, easily seems the macabre, cannibalistic overtones of the Eucharist.
Monk Raphael (Forshay) | 23 December 2009 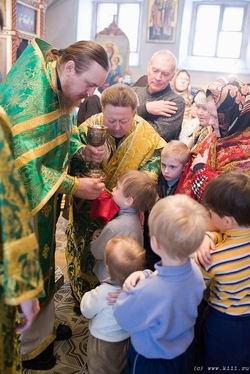 Those of us fortunate enough to be nourished frequently by the Holy Liturgy will perhaps find it difficult to recall just how strange it is to aspire, and indeed be commanded, to eat of the Body and Blood of Christ. Mysterious grace, peace, and healing so wonderfully flow to us in Holy Communion that it may never occur to us to wrestle with what, for many non-believers, easily seems the macabre, cannibalistic overtones of the Eucharist.

To a non-Christian this ritual act of sacrifice appears a bizarre, atavistic carryover from primitive, pre-rational forms of culture. Even among many otherwise sincere and devout Christians of Protestant or else liberal persuasion, who emphasize the obviously symbolic character of Christ’s act of blessing at the Last Supper, the consecrated elements of the Holy Eucharist—which fulfil the Lord’s command to “Do this in remembrance of me” (Luke 22:19)—have no physical relation to the apparent physicality that they signify. After all, non-believers will rightly insist, in the Gospels the disciples quite obviously do not eat of Christ’s literal physical body, either at the Last Supper itself, or after the crucifixion. The Body and Blood of Christ by which we claim to be nourished, Protestants in particular would argue, must clearly be a purely spiritual and non-physical (and therefore merely symbolic), as is consistent with Christ’s emphatic teaching that true worship of God, under the New Covenant he announces, must be performed “in spirit and in truth” (John 4: 23).

And yet the Orthodox Church insists on the Real Presence of Christ in the consecrated elements of the Holy Eucharist, in the actuality of Christ’s substantial presence there, of the tangibility of the saving and healing nourishment it provides. What is this Real Presence? What is really present in the Holy Eucharist such that we really eat of Christ’s Body and Blood—yet not in a literal and cannibalistic fashion? How can we so eat in such an undeniably symbolical, immaterial and yet at the same time real fashion? What is symbolical and what is real in the consecrated elements of the Eucharist and the act of Communion?

The Church has traditionally protected the mysterious and transcendent character of the Real Presence by refusing to fix it in specific theological terminology. Theories such as transubstantiation, consubstantiation, and impanation have variously been presented in such attempts at definition, and one approach here would be to canvass their adequacies and inadequacies in order to explore the range of implications of the mystery of Christ’s Real Presence in the Holy Sacrament of the Altar. I will reserve such a theological inventory for another article and will pursue here instead a primarily scriptural exegesis.

A key factor in grasping the Real Presence of Christ in the Holy Eucharist is to understand that Christ gives and makes himself available there in the fullness of his glorified substance and person, that is to say, in his fully transformed, resurrected Body. The immediate objection to such a view of the Eucharist is an historical and temporal one: namely, that Christ was not yet glorified when at the Last Supper he first gave to his disciples to eat, under the species of bread and wine, of his veritable Body and Blood. I would reply, however, that such an objection is inconsistent with the fuller implications of Christ’s eternal, indivisible unity with the Father.

The Last Supper bears to the post-resurrectional and post-pentecostal Liturgy the same relation that the glory of the Transfiguration bears to the Resurrection and Ascension. The Transfiguration reveals to Peter, James, and John the perpetual glory of Christ’s identity with the Father as well as his fulfillment, as represented by Moses and Elijah, of the Law and the Prophets. The Resurrection is the fuller realization and manifestation within his temporal ministry of the eternal reality of Christ as the Logos: “All things were made through him. . . . In him was life and the life was the light of men”

The Incarnation, Crucifixion and Resurrection of Christ, forasmuch as they perform for us the saving act of Redemption, neither add to nor subtract anything from, nor in any way inherently change, Christ’s eternal relation to the Father. This can be a difficult point for us to grasp since our relation to Christ and the Father in the Holy Spirit are so profoundly and fundamentally transformed by his Incarnation, his historical coming among us and the eschatological revolution and redefinition it performs. What, then, is this resurrected body, of which we partake in the Holy Eucharist? The most concise and profound teaching regarding the nature of the resurrected body is given by St Paul in the fifteenth chapter of his First Letter to the Corinthians. St Paul reproaches those in the Corinthian community who are giving credence to false teaching, at variance with the teaching of the Apostles, regarding the resurrection :

St Paul goes on to explicate the centrality and significance of the Resurrection of Christ :

But in fact Christ has been raised from the dead, the first fruits of those who have fallen asleep. For as by a man came death, by a man has come also the resurrection of the dead. For as in Adam all die, so also in Christ shall all be made alive. (I Cor. 15: 20-22)

Christ is the “first fruits” of the New Covenant. In him a transformation of the “old man,” the body of sin and death associated with the fallen creaturehood of Adam, has been raised to new life and now “sits at the right hand of God, in the glory of the Father” (Nicene Creed). Just as we participate  through our bodies in the fallen condition of Adam, so do we by faith, by grace, by the Holy Spirit participate in the victory of Christ over that condition of sin and death. By offering himself in his innocence Christ makes that perfect act of obedience and surrender that we are unable, in our divided and wounded condition, to make. He is the spotless lamb who during the Passover feast on the eve of his crucifixion takes bread and wine in his hands, saying “This is my body. . . . This is my blood.” The body that will be offered on the altar of the cross, the body which on the third day disappears from the tomb, appears to the disciples as mysteriously both physical and spiritual, able to pass through walls and locked doors, but is also tangible to Thomas the doubter and able to eat and drink with the disciples.

But some will ask, ‘How are the dead raised?With what kind of body do they come?’ You foolish man! What you sow does not come to life unless it dies. And what you sow is not the body which is to be, but a bare kernel, perhaps of wheat or of some other grain. But God gives it a body as he has chosen, to each kind of seed its own body. For not all flesh is alike, but there is one kind for men, another for animals, another for birds, and another for fish. (I Cor. 15: 35-39)

The physical body of man, of Adam, must die so that the grave can give birth to the spiritual body of Christ. Christ as first fruits of the Kingdom of God is the New Man, possessing a new and unprecedented spiritual body.

That is to say, he is neither merely bodily nor merely spiritual. He is a resurrected body, a transformed one, a New Creation.

The glorified body of Christ is not mere flesh and blood, subject to death. His physical and mortal body has been raised up as the first to manifest the imperishable “spiritual body” of the New Covenant, a body that is both physical and spiritual, and therefore it is something more than either. It is a New Creation. It is of this glorified body of Christ that we eat and drink in the Holy Eucharist. As first fruits of the Kingdom, it is offered to the eyes and senses of faith. With our merely physical senses we perceive bread and wine, but the consecrated elements have been transformed into a supernal substance, a food nourishing that in us which reaches through the opposition of body and spirit into the New Man within us. That new man of the new creation is beyond the divisions of flesh and blood, history and gender:

As the first fruits of this New Creation, Christ feeds us with a divine, eschatological substance, his very glorified self, His Resurrected Body now (which is of course to say, eternally) seated at the right hand of the Father. His Blood is the firstfruits of the New Heaven, his Body of the New Earth. We communicate in that glorified Life and Being which heals all illness, mortality, and division—within, between, and among us, and between ourselves and God, the Father of us all.