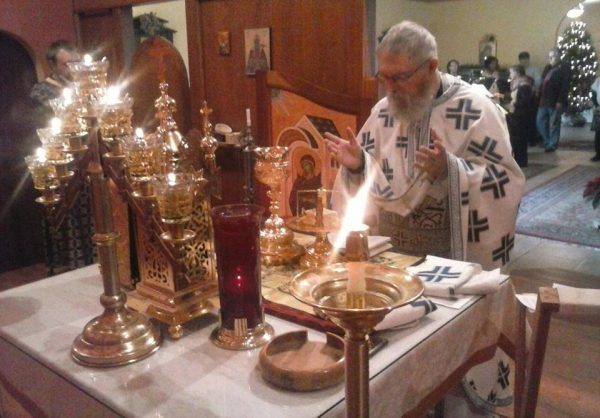 There are certain foundational matters within the Orthodox teaching of the faith that should be settled in our hearts as we think about the faith, or even as we go through our day. Among those is the simple affirmation that all of creation is inherently and essentially good. We hear this first from the lips of God as He creates all things:

Gen. 1:10 God called the dry land Earth, and the waters that were gathered together he called Seas. And God saw that it was good.

Gen. 1:12 The earth brought forth vegetation, plants yielding seed according to their own kinds, and trees bearing fruit in which is their seed, each according to its kind. And God saw that it was good.

Gen. 1:18 to rule over the day and over the night, and to separate the light from the darkness. And God saw that it was good.

Gen. 1:21 So God created the great sea creatures and every living creature that moves, with which the waters swarm, according to their kinds, and every winged bird according to its kind. And God saw that it was good.

Gen. 1:31 And God saw everything that he had made, and behold, it was very good. And there was evening and there was morning, the sixth day.

This essential goodness was constantly affirmed by the Fathers, particularly in the face of some heretical claims that the material world was inherently evil. All that God created is very good.

But what about the fall?

There is a common mistaken notion about the fall (the sin of Adam and Eve). That mistake is to think that the fall somehow changed all of creation and human beings from a state of original innocence into an altered state of evil and corruption. This is not the teaching of the Scriptures or of the Tradition.

Occasionally you hear the term “fallen nature” which is another inaccurate term. “Nature,” in theological terms, is synonymous with “essence,” or “ousia.” It is the very “thing” that something is. What is understood, theologically, is that the fall has brought death into the world. What is different about human beings is not our nature, but our inability to actually fulfill our nature. The bondage that comes into our lives through death is what we term “sin.” But this is not our “nature” causing the problem.

The same is true of creation itself. St. Paul’s language is clarifying. In Romans 8, he describes nature as being “subjected to futility.”

“For the creation was subjected to futility, not willingly, but because of him who subjected it, in hope that the creation itself will be set free from its bondage to corruption and obtain the freedom of the glory of the children of God. For we know that the whole creation has been groaning together in the pains of childbirth until now. And not only the creation, but we ourselves, who have the firstfruits of the Spirit, groan inwardly as we wait eagerly for adoption as sons, the redemption of our bodies.” (Ro. 8:20-23)

The death (bondage to corruption) that afflicts us all is not a bondage of our nature, but a bondage contrary to our nature. By the same token, we can describe this as a bondage that seeks to impact our “goodness.”

Here, I think, it is important to see not just the bondage, but the “groaning” as well. What St. Paul describes is not a creation locked in passivity, quietly embracing its bondage to corruption and death. At every moment, creation resists this bondage. It groans and labors to bring forth the good, despite every limitation set upon it.

This struggle and groaning is where I would draw our attention. It is a sign and testament to the essential goodness of God’s creation that has not been, nor ever can be erased. Creation pushes back against our feeble efforts to control it. Asphalt and concrete yield to tiny sprigs of grass whose groaning has overcome the weight of our technology. Every Spring, what cycles of weather have suppressed comes back with a vengeance of life.

Even within our human life and culture, the drive towards the good is renewed day-by-day. Our bodies repair themselves, and, despite the battles we encounter with illness, our bodies drive relentlessly towards health. Many people grow frustrated when they see loved ones who are dying linger on week after week. Our bodies were not created to die and they do so reluctantly.

I take great comfort in this drive towards goodness that is inherent in all of creation. The various forms of madness in our modern world that demand things contrary to nature, even writing them into law, cannot actually re-write nature. Cultural madness comes and remains for a time, but it is engaged in a losing argument. Inasmuch as gender is written into creation, so much will it eventually manifest itself despite modernity’s efforts to re-imagine itself. The same is true of other mere ideologies. Ideas come and go with fleeting significance. Creation is a force of divine tradition – it has been handed down as a goodness that will not be erased.

There is a battle that rages within creation. Death has entered the world and we groan together with the whole of the created order. Christ has also entered our world and plunged Himself even into the midst of death. There we see the true principle of all creation (the Logos Himself) defeating death and setting creation free. It is Christ’s resurrection that answers the groaning of all creation.

In the course of our day, we tend to pay the most attention to those times and moments in which goodness has been diminished in some manner – whether by our own sins or by the circumstances of our lives. Such moments, of course, are surrounded by countless others in which goodness triumphs and life abounds. That we take most of our time for granted is itself a comment on the dominance of goodness, while being an equally sad comment on our thanklessness.

The groaning of creation is the root of a song – an ison that undergirds the melodic hymns of noetic beings. It is a song of thanksgiving, the sound of our being, the voice of created goodness offered to the Source of all goodness.