Source: Saint Athanasius Orthodox Church
The Scriptures are silent not only on the early life of Christ, but also the lives of those closest to Him. In fact, when the Blessed St. Jerome was pressed to reveal details about the life of the Theotokos, he demurred. The fourth-century father and scholar is reputed to have remarked that, “If you were to ask me how the Most Holy Virgin passed the time of her youth, I would answer that this is known only to God Himself and the Archangel Gabriel detailed to protect her.”
Fr. Justin Patterson | 04 December 2008

On November 21st, not even a full week into the Nativity Fast, we celebrate one of the Great Feasts of the Orthodox Church: the Presentation, or Entry, of the Theotokos into the Temple. What does this feast signify for us? 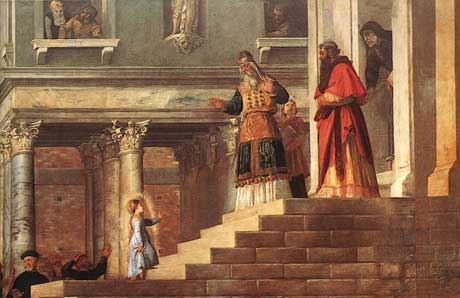 This feast constitutes a “churchly” meditation on the Incarnation of the Word, a meditation that takes place in the inner life of the Church. Like a number of the feasts of the Mother of our Lord, the Feast of the Entrance of the Theotokos is based on the Tradition of the Church rather than on scripture references. The Scriptures are silent not only on the early life of Christ, but also the lives of those closest to Him. In fact, when the Blessed St. Jerome was pressed to reveal details about the life of the Theotokos, he demurred. The fourth-century father and scholar is reputed to have remarked that, “If you were to ask me how the Most Holy Virgin passed the time of her youth, I would answer that this is known only to God Himself and the Archangel Gabriel detailed to protect her.” We know little about the life of the Virgin Mary. But the witness of the Tradition of the Church gives us some information on which to meditate. Some of the early reflections of the Church on the life of Jesus and His fore-bearers are found in the Proto-Evangelium of James, a second-century book into which much of the lore of the first-century Christian community was assembled.

In the Proto-Evangelium of James, we find early Christian reflection on the life and meaning of the Theotokos. We learn that Mary was conceived miraculously to a barren Joachim and Anna. We come face to face, as well, with the tradition that Joachim and Anna take Mary to the temple in order to consecrate her to the service of the Lord. (This kind of parental offering has clear antecedents in Jewish piety. Consider, for example, Elkanah’s and Hannah’s presentation of Samuel before the High Priest in thanksgiving for the divine opening Hannah’s womb in I Samuel 1.) What is truly surprising in this story is that Mary is female—which under the Jewish Law exiled her from the inner sanctums of temple worship. Nonetheless, moving prophetically, the High Priest Zacharias overturns these proscriptions and escorts her through the various courts of the temple and directly into the Holy of Holies where she remains for a number of years. This three-year-old child, the old priest forsees, will contain the uncontainable. She is the hope of Israel and, indeed, of the whole world. Zacharias is the first to discern that both the temple and the Ark of the Covenant are but shadows pointing to a total fulfillment in the Theotokos who—as a new Holy of Holies—contains God Himself made flesh! He realizes, in total amazement, that she is the climax of Jewish history: that through her all the world will be blessed and that she will bear Him who will unite God with Man, unite Man with God, and thus save the world!

Theology at its most fundamental level is about our prayerful reflection on the Faith. And so this feast becomes a genuine feast of theology for us. It is our chance once again to ponder the goodness of the Father under the Old Covenant and His mercies toward us under the New. We remember His careful preparation of His people (the Jews) for the Coming of His Son—of which Mary is the carefully-nurtured fruit—and His extension of grace through the coming of His Spirit to all mankind. As we survey the Father’s awesome economy of salvation, we cannot forget the role of a humble woman named Mary who herself became the temple of the Lord. Her life reminds us of our supreme calling: to follow her in becoming the temple, the ark, the bearer of the very glory of God. This is the Feast and this is the Gospel. May we keep it with joy!

On October 1/14 the Church celebrates the Feast of the Protection of the Theotokos. This feast of the…