The Flight From Truth 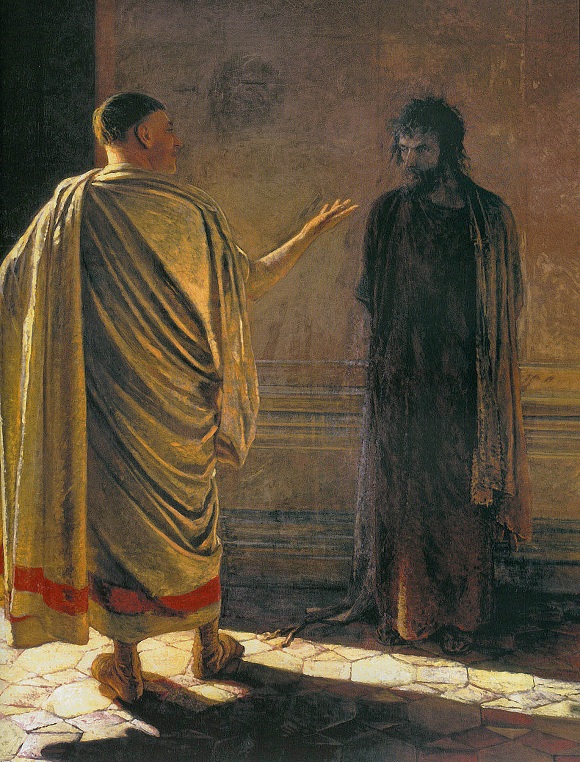 It might mean that your opponent is convinced of his religious (or anti-religious) views every bit as profoundly, seriously, and sincerely as you are of yours. He sees something else as being true. In that case, we should respect the sincerity of his convictions – the recognition that someone looks at the world differently is the beginning of the discussion, not the end.

This expression might simply indicate a reluctance to talk about faith; in this case we should, of course, respect the other person’s right to avoid the conversation.

But it is also (fairly often) used quite literally. The Resurrection of Christ, for instance, is “true for you, but not true for them/us.” There is an entire philosophical trend, postmodernism, which proclaims just this. I recently came across a phrase describing just such an attitude towards truth: “it is propagated, for instance, by Richard Rorty: no one can have a serious claim to ultimate truth, or else we simply have a dimwit in front of us.”

Why should we pay attention to this? Attacks on our faith very often unfold not even from good old fashioned “scientific” atheism, but from postmodernism; very often postmodernist slogans that have gone into popular usage – “No one has the right to ultimate truth! That is true for you, but not for me!” – are picked up by people who are unfamiliar with the very word “postmodernism.”

What is wrong with the postmodernist approach? That it is philosophically false and morally depraved.

Second, you will never make use of the phrase “true for you, but not true for me” with regard to something with the least bit of real interest to you. For example, I borrow 5,000 rubles from you and, when the time comes to repay it, I say: “That I owe you 5,000 rubles is true for you, and I have no objection whatsoever to your believing it. But it is not true for me. What is true for me is that it is not 5,000 rubles, but 50. Moreover, it is not a debt, but a gift. I cannot accept your attempt to monopolize the discourse. Your claim to ultimate truth is intolerably authoritarian.” Such rhetoric would likely not impress you very much. Five thousand rubles is not very much, but it is more than nothing.

When it comes to something that is important to you, you understand full well that truth exists with regard to a loan of 5,000 rubles, or to which pills are in this box, or to which way this bus is going. This phrase “true for me, but not true for you” is simply meaningless.

Christianity makes a series of claims about reality. They cannot be “true for you, but not true for me.” They are either true or they are not, perfectly independently of you, me, or anyone else.

Sometimes people try to avoid this obvious point by speaking about the ambiguity of language: the very same statement can be both true in one sense (metaphorically) and false in another (literally). For instance, when someone says that something “broke his heart,” this may be true metaphorically, but his heart did not literally break, or else he would have died on the spot. But the use of metaphorical language does in any way change the fact that the statement made using this language is either true or false. This person meant that something “caused him great pain” – and this claim is either true or false.

Some words can be fairly ambiguous: for example, “fair-haired” or “elderly.” Beginning at what shade does someone stop being fair-haired? Beginning at what moment is someone considered elderly? But, in spite of this, if someone is described to you as an “elderly blond,” you will not go looking for a young brunette – any meaningful claim about reality will either correspond to reality or it will not.

Sometimes “truth” is confused with “verifiability.” It is said that religious claims are unverifiable. This is often the case – but not only with regard to religious claims. We cannot verify whether Pushkin fought a duel with d’Anthès – but we can only rely (as with Christ’s Resurrection) on the memory of eyewitnesses. But, in any case, the claim “Pushkin was fatally wounded in a duel with d’Anthès” is either true or false.

The main problem with postmodernism, however, is not that it is false – after all, the world is full of false philosophies. But behind all these false philosophies is the misguided but valid desire to know and follow the truth. Our human responsibility is to seek the truth; without this any kind of morality is inconceivable. It is impossible to do good without desiring to know what this good is. Postmodernism suggests that we betray our human vocation and abandon the search for truth.

Thus, Christ died for our sins and rose from the dead; He established His Church, which we enter through Baptism and in which abide through the Eucharist. He will return in order to grant eternal life to all who hope in Him. This is truth. This is the reality of things. Of course, you can contest this and we can have a discussion – only, please, refrain from such nonsense as “this is true for you, but it is not true for me.” It is simply True.