The Good Leaven from Outside the Supposed Goodness 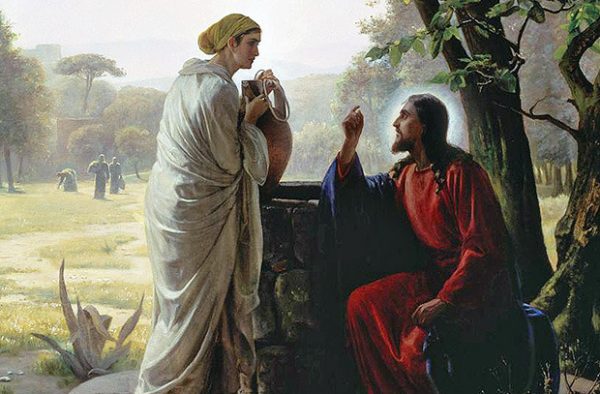 The believer never stops drawing near the Resurrection until the Resurrection itself snatches him from the way he is approaching it. Furthermore, it drives him towards its true approach to man, whoever he may be, under the light of the dispensation that Christ inaugurated amidst our sinfulness which is still deeply rooted within us. There is no more obvious example than what happened before the eyes of the Apostles themselves when they came across Christ’s encounter with the Samaritan woman and there are no more effective words, until our present day, than those uttered then by Christ unto them!

None of the Evangelists records any conversation of Christ longer than the one that brought Him together with the Samaritan woman. It seems “it was necessary” for Christ to pass through Samaria, where there was Jacob’s Well in Sychar. It is a sort of necessity for which we find no need at all because nothing can– or rather, nothing must– happen there. Such an encounter was, in fact, the fruit of fervent prayer or a desire extended and poured out in service to the salvific divine dispensation for the sake of “that which was lost” (Luke 19:10). That verse does not apply to us (because we think that we are not one of those), but rather to the Samaritan woman because the Gospel must be “useful” for someone, especially “this” sort of person (that is, those to whom can apply our standards in classifying those whom we consider that are lost).

Jesus found in the Samaritan woman the good leaven in order to tell us about those who are worthy of resurrection and how their resurrection comes about. She is a leaven that transformed from the old man to the new man, a leaven that leavened the dough of all Samaria through the testimony of her confessing what she did– not for cheap publicity for herself, but in order to present the person who revealed her deeds to her without any human foreknowledge and who raised her up from them. Her joy at the One who loved her inundated her and she, in turn, poured Him out upon those who had not hesitated to roll their eyes at her immoral life, forcing her to go out to the well at midday in order to fulfil her need for water.

The rising of the Samaritan woman to the light of Christ has as a consequence the rising of the Samaritans to the very same light. You find yourself before a rolling snowball that grows bigger the more it rolls downhill– that is, the more the Samaritan woman humbled herself before her folk. A small hope was transformed into a great hope: a living, experienced, accepted and transmitted hope. It is a hope that is remarkably contagious, to the point that we wonder today why we are not feeling the same thing. Perhaps we have gotten used to the Feast of the Resurrection to such a degree that we have become emptied of it without being aware. We give thanks to God as we notice that today there are many who are still echoing that great hope that has shaken Samaria, the one which was eagerly cried out by those Samaritans converted to Christ: “Now we believe, not because of what you said, for we ourselves have heard Him and we know that this is indeed the Christ, the Savior of the world” (John 4:42).

You are surprised, amidst this overwhelming joy the one that you notice in Christ’s heart as well as in the heart of the Samaritan woman and her Samaritan folk, by what the apostles themselves (and we too) were immersed in and concerned of. Perhaps they were right, (and we too, like them), when their minds were on a matter other than what was on Christ’s mind and heart and was the core of His mission, so they said to Him, “Master, eat” (John 4:31). The Master could not but teach them: “I have food to eat of which you do not know… My food is to do the will of Him who sent Me, and to finish His work” (John 4: 32, 34). By uttering these words, the Master generates in you a sort of “shame” that strips you of your cares (while at the same time He discloses them) and that purify you by replacing them with your love for and willingness to do the will of His Father. In that way, He makes you worthy of becoming His dinner guest at His table, eating the same food He showed to His disciples.

Then you rejoice wholeheartedly when you notice that the Teacher is constantly saving us from our comprehension of the resurrection and discipleship that are keeping us, indeed, distant from Him. Instead, He reveals to us the true meaning of the resurrection and discipleship, thus introducing us into His purpose for the salvation of mankind. Your joy is increased when you realize that He is able to find good leaven from outside what we supposed to be goodness, i.e. from outside the standards that we set for goodness and by which we judge others. In this context, the Resurrection becomes a natural gift that can be the “good part” of our brothers and brethren in any place we are settled. How great is the favor of this Samaritan woman, in that the disciples ate of the Teacher’s true food, as it has been the same for us, after them! In fact, she was a good leaven, from nowhere and without us being aware of! How great was her favor, because she put the Resurrection within reach of those who are near and those who are far, as both of them are within the scope of the hope that the Resurrection has sown within us for all time!

Why Antioch did not Sign the Decision to Convoke the Council