The Healing Power of “Offering”

That purpose, in the simplest and most basic terms, is to make an offering of everyone who seeks and longs for eternal communion with the Holy Trinity. As ordained clergy or as laypeople, each of us is called to offer up the world and one another "to Christ our God." Thereby every moment, every event, together with every life and experience, can participate in the eucharistic elevation: "Thine own of Thine own we offer unto Thee, on behalf of all and for all."
Archpriest John Breck | 01 March 2010 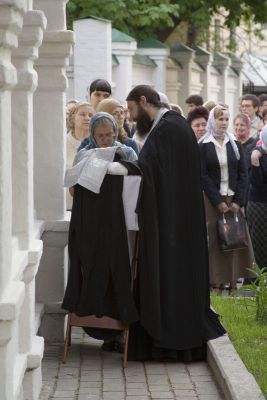 A young Orthodox priest had just arrived in the hospital waiting room to minister to a grieving family. He talked for a while with the oldest member, a man in his late sixties who was struggling to come to terms with his wife’s rapid decline.

The priest — call him ‘Father Paul’ — spent a few minutes with the husband, then went into the ICU where the dying woman lay semi-comatose, a ventilator pumping air into her tired lungs and tubes protruding from her wasted arms. He looked at her for a few moments, took out his prayer book and read several petitions. Finally he blessed her, anointed her, and asked God to grant a peaceful end to her suffering. Then he returned to the waiting room and tried to comfort any of the family members who seemed open to his ministrations.

When I spoke to him later that day, Fr Paul vented a great deal of frustration over what he felt was his incapacity to minister to this family in any really healing way. He had tried to serve them on many different levels: as a friend, as a grief counselor, and as a witness to God’s love. It quickly became clear that his sense of failure was due mainly to the fact that he had not been able to offer either the dying woman or her family members the degree of solace and relief from depression he felt they needed. He concluded that in fact the nurses and the social worker had provided more for the family than he had himself. With a slight edge of bitterness he added, “In seminary, nobody ever taught me how to relieve people’s grief.” Then he added, “Maybe I just should have gone into counseling.”

Behind his reaction there is a great deal of misunderstanding as to the real purpose of priestly ministry. In this therapeutic age it’s probably inevitable that we want above all to relieve people of their physical and emotional suffering. In seminaries faculty members, whether priests or not, often feel that they have succeeded if a student who comes to talk during office hours leaves feeling better than when he arrived. Then they wonder why, a day later, the student is still depressed.

The same is true with many priests who spend long hours hearing confessions and making hospital visits. Their primary aim is very often to console, to help, to unburden the person before them; in a word, to make them feel better. Then they feel frustrated when the person continues to experience guilt, anxiety, loneliness or grief.

Of course we want to relieve the suffering of others. That effort, too, is part of living the Gospel. But it is not the primary aim of priestly ministry.

We need constantly to remind ourselves that the priesthood is a universal vocation. Every baptized member of the Body of Christ is consecrated to “a holy priesthood, to offer spiritual sacrifices acceptable to God through Jesus Christ” (1 Pet 2:5). Some are ordained for a specific function within the Church; they are endowed by grace with the particular responsibility and capacity to celebrate the sacraments. Others in the congregation can assume different functions, such as preaching the Word of God and teaching elements of the faith, even though these as well normally fall to the priest.

The same is true with pastoral care. Because he is salaried by the parish, the people often assume that the priest alone is responsible for “ministering to the sick and suffering,” by making house calls, visiting people in hospital, and offering comfort to those burdened by grief. Many also assume that the priest, or a selected elder in the parish, is there to provide inexpensive counseling. If this almost inevitably means “cheap therapy,” it is for two reasons. First, because except in special cases, neither priest nor parishioners have been trained to do therapy or to offer proper psychological counseling. More importantly, it is because they have misunderstood the most fundamental purpose of priestly ministry.

It is crucial that we minister to those in need through whatever means may be at our disposal. Pastoral counseling offers valuable opportunities for exercising that ministry. But it remains a secondary function relative to the chief purpose of the priestly vocation, whether ordained or lay.

That purpose, in the simplest and most basic terms, is to make an offering of everyone who seeks and longs for eternal communion with the Holy Trinity. As ordained clergy or as laypeople, each of us is called to offer up the world and one another “to Christ our God.” Thereby every moment, every event, together with every life and experience, can participate in the eucharistic elevation: “Thine own of Thine own we offer unto Thee, on behalf of all and for all.”

In the case of Fr Paul, this means that his responsibility and his blessed privilege is first of all to pray with and for the dying mother and her loved ones. Through his prayer, which participates in the eternal intercession of the communion of saints, he makes the one gesture that can bring real and lasting healing to each family member, including those who die. That gesture consists in offering each of them to God, to His glory and praise, begging that His will be done in each life concerned.

In this way, Fr Paul performs an act, a sacred service, that each of us is called to render, particularly in situations of death and dying. And we are all in such situations, every day and every moment of our life. He may not make the family feel any better. He may not be able to alleviate their burden of grief.

But if he can make a priestly offering of each family member to God – through his prayer, anointing, comforting, and any other appropriate means – he has done what is essential. He has placed them all into the care of the only true Physician of our souls and bodies, the only One who can truly heal. And he has fulfilled, in the most faithful way possible, his priestly vocation.