The Incredible Story of a Missionary

Baptized Roman Catholic, later becoming an Episcopal priest and missionary, and three years ago having been received with his family into the Holy Orthodox Church, he is a zealous Orthodox missionary and evangelist currently preparing for ordination to priesthood at Saint Tikhon’s Seminary, South Canaan, Pennsylvania.
| 14 February 2007 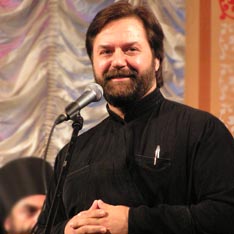 Baptized Roman Catholic, later becoming an Episcopal priest and missionary, and three years ago having been received with his family into the Holy Orthodox Church, he is a zealous Orthodox missionary and evangelist currently preparing for ordination to priesthood at Saint Tikhon’s Seminary, South Canaan, Pennsylvania.

Maximus has been involved in various church ministries including Foundation Park –a ministry for the poor, Strike force –strength ministry for teens, and Fellowship of Christian Athletes . He served three years as head counselor at Mid-Atlantic Teen Challenge , a drug and alcohol rehabilitation program for teenagers.  In addition, as part of his Masters degree at Regent University, he spent three dynamic summers ministering in Germany, the United Kingdom and Africa in connection with the evangelistic ministry of Christ for all Nations.

After graduation in 1990, Maximus was invited to join the ministry of “Christ for all Nations,” (CfaN) as an associate evangelist. He moved to Kenya, East Africa, and eventually lived, traveled and ministered in nineteen African nations and eventually led evangelization efforts in various parts of the world including India, Philippines, Russia, and Madagascar.

After working with thousands of churches from various denominational backgrounds in the international evangelistic campaigns, Maximus eventually grew in his convictions about sacramental and liturgical traditions as he studied church history. The most helpful materials were the teachings and traditions of the Orthodox Church. 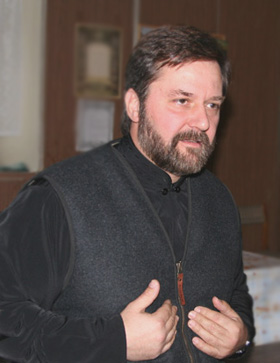 As a first step, Maximus took sacred vows as a deacon and later a priest in the International Communion of the Charismatic Episcopal Church. Over time, as a result of his extensive ministry in Eastern Europe , it became increasingly clear that God was calling him and his family to become members of the Orthodox Church. Since then, Maximus, his wife Susanne, and four children have been received into the Orthodox Church in America and are active members of Saint Nicholas Cathedral in Washington D.C.

Today, Maximus is the president and founder of the evangelistic mission “Gospel to all Nations” (GTAN) – an evangelistic ministry in the process of fully coming under the auspices of the Orthodox Church. GTAN is grounded in the historic faith and church of the past, but striving into the future to reach the world with the Gospel of Jesus Christ. It fosters unity and cooperation between various church denominations while witnessing the richness and fullness of the apostolic faith of the Fathers, and is an equipping force for the saints in regards to evangelism and missions. Lastly, it hosts Gospel campaigns to non–Christians: Muslims, Hindus, Buddhists and general un–evangelized people and has a particular interest in reaching the least evangelized nations of the world.

Maximus has preached Gospel campaigns in 39 nations, face to face with millions of people. Meetings have ranged from five people, to five hundred thousand people in a single service, as in Port Harcourt, Nigeria.  Noteworthy, is the fact that multitudes of people from the Muslim faith have converted to Christianity in both North Africa and Central Asia as a result of these numerous campaigns, held from Mali to Kyrgyzstan.

Over the past few years, the ministry has hosted campaigns and conferences in various cities in Russia, Ukraine, Byelorussia, Kyrgyzstan, Kazakhstan, Sri Lanka, Burma, Armenia, Pakistan and Cuba. One unique outreach was in historic Armenia, in the city of Sevan , where from a population of approximately 10,000 people, up to 7,000 people attended the largest service. In the evenings, multitudes of people, including all the local prostitutes , responded to Maximus’ words for repentance and church attendance, while during the day, a conference was hosted with up to six hundred people from local churches – attending daily teaching and discipleship.

In September 2006, Maximus completed an extremely fruitful mission trip to Sakhalin Island, preaching in churches, public meetings, orphanages, monasteries, by radio, TV, and newspaper interviews, working together with Bishop Danyyl of Sakhalin and also Archbishop Mark in the city of Khabarovsk, mainland Russia. Between the 24th of September and 2nd of October he did evangelistic work with Archbishop John, the bishop of the Russian Orthodox Church in charge of missions and evangelism, and is teaching in their seminary and preaching in the city of Belgorod, Russia.

Maximus successfully completed five mission trips this summer.  He is now enrolled at St. Tikhon’s Seminary in South Canaan, PA, to which he commutes.  Please keep him and his family in your prayers.  He wife, Susanne, delivered their fourth child in October.