The Joy of Being Always with the Lord

To mark the Leavetaking (Apososis) of the Feast of the Ascension, we offer the following reflection by Fr. Alexander Men.
Archpriest Alexander Men (+1990) | 01 June 2012

To mark the Leavetaking (Apososis) of the Feast of the Ascension, we offer the following reflection by Fr. Alexander Men:

During His earthly life, Christ the Savior liked to withdraw to the mountains, where the sky seemed closer and vast expanses of land were visible. When He was being tempted by the devil in the wilderness, all of whose his temptations he rejected, He was standing on a mountain so high that it seemed that all the kingdoms of the world were visible therefrom. It was on another mountain that He prayed, His face shining and His clothes becoming white and gleaming – this was His Transfiguration. He frequently stopped to spend the night on the Mount of Olives with His disciples. This mount was not far from Jerusalem. It was there, on the eve of His Passion, that the Lord spoke to His disciples about what would happen to the world, to the people, and to Jerusalem.

Likewise, after He had appeared to His disciples, He went up this same beloved Mount of Olives with them. We do not know whether this was in the morning or in the evening, but from there, from the peak of this mount, there opened before them hills, valleys, and the city lying at their feet. This was Jerusalem, in which lived the righteous and the sinful, prophets and murderers, kings and priests. The Lord may have been standing on the very place on which He had foretold the future of the world. Sending out His disciples therefrom, He said to them: “Just as My Father sent Me, so now am I sending you” [cf. John 20:21]. There they stood, timid but joyful, not knowing for certain what would come next. One of them asked: “Lord, perhaps now You will restore the Kingdom to Israel?” [cf. Acts 1:6]. They did not know where or for what reason He was sending them. Later they were enlightened by the Spirit of God, Who both showed them the way and gave them the power of the Word. 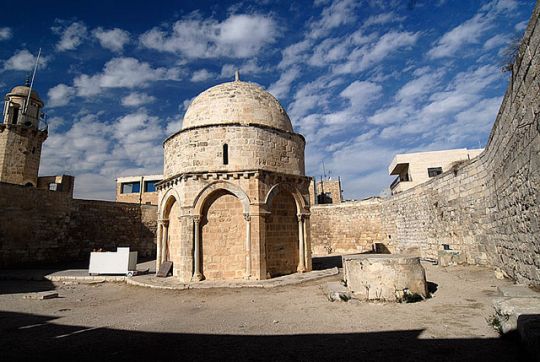 The Chapel of the Ascension, Jerusalem

Meanwhile, the Lord raised His hand and blessed them, blessing also all whom they would later enlighten, as well as all their descendents, all those hundreds, thousands, and millions of people. “All power has been given Me,” He said, “both in heaven and on earth” [cf. Matthew 28:18]. He had previously been subject to human laws – being in need of food and water, sleep and rest – but now He had conquered everything, even death. After the Resurrection He said: “All power has been given Me, both in heaven and on earth.” Now everything is streaming towards Him. The entire world will submit gradually to the Risen Lord – neither in a single hour, nor in a single day, nor in a single decade, but over the course of a very long time, everything will submit to the Lord Jesus.

While He was blessing them, a cloud separated Him from them. This cloud has not disappeared even now, for we do not see Christ with our physical eyes, although He remains here on earth. He is on earth; He is in heaven. He is God; He is man. He is in eternity; He is with us in our short lives. We can touch Him and we can hear His voice, because the Lord is with us.

This is why the Church sings these words in the troparion: “Thou hast ascended in glory, O Christ God, granting joy to Thy disciples.” One might wonder: what kind of joy can there be when He was parting from them, when He will no longer appear to them in visible form? There was joy, however, because He remained with them forever, remaining in everyone who loves Him, for He is the Savior Who came into the world to save sinners, of whom I am chief. The joy of being always with the Lord – this is what the Ascension means. Now He is neither in Jerusalem, nor in Bethlehem, nor in Nazareth; neither on a mountain nor in a valley; neither at the sea nor in the city. He is everywhere. He ascended to the right hand of the Father; He abides where God abides, which is everywhere. Therefore, in any place on earth, at any time of day or night, we can always call upon Him and He will be at our side. He will be our Lord and He will hear us, for He is with us forever, even unto the end of the ages.