The Kidnapping of Coptic Girls

When a rumor circulated last week that a Muslim woman in the southern Egyptian city of Kom Ombo had been forcibly converted to Christianity, a mob of Muslims felt compelled to riot, attacking and firebombing the city’s local Coptic Christian church.

The rioting in Kom Ombo had begun when local Muslim residents believed a missing 36-year-old Muslim woman had been forced to convert to Christianity and was being held against her will in the Church of Mar Girgis, Kom Ombo’s largest Coptic Church. 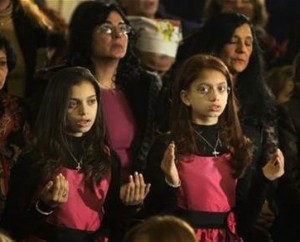 That transgression was apparently egregious enough to induce hundreds of local Muslims to surround the church for three days hurling Molotov Cocktails and rocks, a melee that caused injury to over two dozen Christians and Egyptian police.

Of course, it should be noted that Copts, who make up 10 percent of Egypt’s populace, are used to being on the receiving end of Muslim ire, having seen over the past several years scores of their churches routinely attacked and burned.

In fact, Muslim rage at Coptic churches and their parishioners extends beyond Egyptian borders, fury evidenced by the recent attack by gunmen of an Egyptian Coptic church in the Libyan city of Benghazi that injured two priests.

That assault had been preceded by the arrest of nearly 50 Egyptian Christians in Benghazi on suspicion of proselytizing, detention which included the Christians reportedly being tortured by, among other things, having their tattooed crosses burned off with acid.

Nevertheless, the mob fury in Kom Ombo began to dissipate somewhat when the missing woman reappeared to her family, where according to an Egyptian police official, it was found that she was not the victim of a forced conversion but rather had disappeared for “family and social reasons.”

Yet, while the rumor of the forced conversion was revealed to be a fake, what is all too real is the ongoing and escalating abduction and forced conversion to Islam of Coptic Christian women and girls by Egyptian Muslims.

While this distressing practice has been plaguing Egypt’s Coptic community for decades, the number of these abduction cases, perhaps not surprisingly, has dramatically grown since the January 2011 ouster of Egyptian President Hosnai Mubarak.

In a 2012 report commissioned by Christian Solidarity International titled Tell My Mother I Miss Her and written by George Washington University professor Michele Clark and Coptic human rights activist Nadia Ghaly, 500 cases were reported of Coptic females having been kidnapped and forcibly converted to Islam.

For those young women and girls fortunate enough to escape their captors, their horrors were chillingly expressed by one of the authors of the CSI report before a US congressional committee in July 2012:

Many who return home indicate that they were raped and told they could not go home because their families would never accept them back. Many are beaten; others are forced into domestic servitude. They are not allowed to leave where they are held without a member of their captor’s family keeping watch. They eventually are brainwashed into thinking the only way to be safe is to convert. Their families, who have been searching frantically for their daughters, sisters and wives — without any help from the police — often never discover their fate.

Equally disturbing is that while the number of abduction cases has dramatically grown, the age of its victims has dramatically shrunk, with the typical age of abductees, according to an official with a Christian NGO, to now be 13-14 years of age.

One of those young girls is Sarah Ishaq Abdelmalek, a 14-year-old Coptic girl who disappeared in September 2012 after stopping at a bookstore on her way to school.

Sarah’s kidnapper was believed to be the 27-year-old Muslim bookstore owner, Mahmoud Abu Zied Abdel Gawwad, a married man and father who reportedly smuggled Sarah across the border into Libya. Despite an Egyptian prosecutor ordering Gawwad’s arrest in October 2012, the police have yet to arrest him.

Yet, that governmental inaction should come as little surprise to those who believe Sarah and girls like her to be the victims of a well-orchestrated plan to kidnap Coptic females, an operation run by Egyptian Salafist groups, Muslim businessmen and Egypt’s governing authorities.

Elements of that plan were detailed in a May 2008 report by the Egyptian newspaper, Al Fagr, which told of Muslim businessmen funding an operation “carried out with the collusion of State Security and Mosque sheikhs” to buy Christian females for conversion to Islam, prices which depended on the “girls’ ages, looks and social standing.”

Moreover, according to Ebram Louis of the Association of Victims of Abduction and Enforced Disappearance, a Christian NGO, “In every Egyptian province there is a Salafist association which handles the kidnapping of Christian girls. They have homes everywhere where they keep them.”

Still, even if a girl’s location is reported to Egyptian authorities, Louis said those officials will simply “inform the Salafists, who then move her away to another home and then we lose all trace of her.”

The sad reality, however, is that the abduction and forced conversion of Christian women and girls has not only found fertile soil in Egypt but in Muslim countries scattered throughout Africa, the Mideast and Asia.

In Pakistan, for example, it is estimated that every year over 700 Christian girls are kidnapped, forced to marry their Muslim abductors and convert to Islam.

In many instances, these forced marriages and conversions are carried out by powerful and influential Muslim families who threaten and severely beat the young girls into verifying their compliance if questioned by local authorities.

However, as in Egypt, these abductors have little need to take the added step of forcing compliance from their victims, given Pakistan’s legal entities either have no moral qualms about the practice or are themselves bribed to turn a blind eye to the situation.

In Egypt, one of those blind eyes belongs to Egyptian President Mohamad Morsi who has publicly denied that the practice of forced Islamization of Coptic women and girls even exists in his country.

While Morsi may be willfully ignorant, others see the situation all too clearly, such as Coptic Orthodox Pope Tawadros II. He has called the kidnapping and forced conversion of Christian girls a “disgrace for the whole of Egypt,” while also asking, “Can any family accept the kidnapping of their daughter and her forced conversion?”

Unfortunately, while many Christian families may not be accepting of this horrendous practice, it may be safe to assume that the Obama administration is, given its recent decision to send over $200 million to Egypt in financial assistance.

That money, which is part of more than $1 billion in US financial aid promised to Egypt by President Obama in 2012, was reportedly contingent upon the Egyptian government’s promises of economic and political reforms, a benchmark that the Obama administration apparently believes has been met.

While many may disagree with that assessment, perhaps some of that US-taxpayer funded money can be earmarked to help save the Coptic women and girls of Egypt from their Muslim abductors.