The word Magi comes from the Greek word magoi, meaning "astrologer" or "magician". By the time of the birth of Christ, the Magi were an already well-established and ancient upper class of people from the Persian Empire in today's northern Iran. The Magi were pagan priests, specializing in astrology and the interpretation of dreams. Skilled in philosophy, medicine and natural science, they became the scholars of Persian society. The Holy Fathers held the tradition that the Magi
admin | 31 December 2006 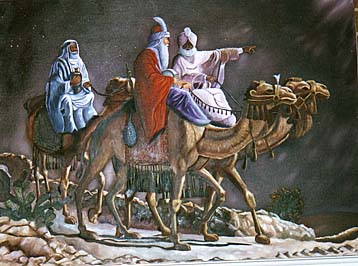 In the troparion for the feast of the Nativity of Christ we sing:  “those who worshipped the stars were taught by a star to adore  thee”.  In the nativity account according to the Gospel of Matthew we  read that when Christ was born there appeared an overwhelmingly bright star in the east. While off in the distance, wise men from the  east, or Magi, notice the star and begin to follow it towards  Jerusalem.   The visit of the Magi is the subject of many legends,  many emanating from the Western world.  What, then is the true  account of this visitation?

The biblical account of the Magi appears only in the Gospel of  Matthew: “Now when Jesus was born in Bethlehem of Judea in the days  of Herod the king, behold, wise men from the East came to Jerusalem  saying . where is he who has been born king of the Jews? For we have  seen his star in the East, and have come to worship him” ( Matthew  2:1-2).

The word Magi comes from the Greek word magoi, meaning “astrologer”  or “magician”.   By the time of the birth of Christ, the Magi were an  already well-established and ancient upper class of people from the  Persian Empire in today’s northern Iran.  The Magi were pagan  priests, specializing in astrology and the interpretation of dreams.  Skilled in philosophy, medicine and natural science, they became the scholars of Persian society. The Holy Fathers held the tradition that  the Magi, although pagans, were deeply religious priest-philosophers who collected wisdom from wherever they could get it. Because the Magi had direct contact with those Hebrews who remained in the east  following the Babylonian captivity, they would have surely been familiar with their prophecies of a savior king, and especially the
words of the Mesopotamian prophet Barlaam which we read in Numbers  24:17, and are reflected in The Canon of the Nativity, ode 4: “Thou  hast filled   the stargazers with joy, O Lord.  They knew the hidden  meaning of the Prophet Barlaam’s words: ” Thou hast made the star of  Jacob to rise.”

Although they were  not “kings” in the sense that they are perceived by western legends, the Magi   were regarded as men of aristocratic  rank even in Jerusalem, which is made apparent by their easy access   to King Herod’s court. As we read in the Gospel of Matthew,   Herod  the Great, known for his cruelty, summoned the Magi because their  inquiries into the birth aroused his jealousy, and Herod wanted to
use them to locate Christ in order that he may have him killed. After leaving Herod, the star once again appears to the Magi,  as we read:  ” ..the star, which they had seen in the East, went before them, until it came to rest over the place where the child was” (Matthew 2:9)

Following the star again, the Magi arrive in Bethlehem bearing gifts for the newborn King.  Matthew writes in his gospel: “. . . and going  into the house they saw the child with Mary His mother, and they fell  down and worshiped Him. Then, opening their treasures, they offered  Him gifts, gold and frankincense and myrrh.” (2:11). St. Matthew does
ot mention the names of the Magi, but through the Holy Tradition of
he Church we know them as Saints Gaspar, Melchior and Balthasar.  They were baptized into the Christian faith many  years later by the  Apostle Thomas, who was on his way to preach the Gospel in India.  Their relics were brought from Persia to Constantinople in the fourth  century by St. Helen (the mother of the Emperor Constantine), then  were transferred in the fifth century to Milan and then, finally in
1146 to Cologne Cathedral in Germany were they remain today.

The number and type of gifts bought to Christ by the Magi are not  oincidental. Perhaps  the three gifts were a type of the Holy  Trinity;  or symbolize the triune nature of Christ’s ministry:  prophetic, royal and priestly; or perhaps it is an expression of the  three parts of the nature of man: spirit, soul, and body.  The  significance of the gifts themselves bears mentioning, as gold is fit  to offer a king,  and Christ’s two natures are revealed in the  offering of frankincense fit to offer God, and myrrh, for a man who  is to suffer and die.

What of the star itself ?  Many attempts have been made by scholars to give some sort of scientific explanation for the Star of  Bethlehem. Indeed, there is substantial historic and scientific  evidence of an unusual celestial event at the approximate time of the  birth of Christ, yet even this would not explain the behavior of the  star as described by the Holy Scriptures.    Of course, to the Church
here is a more mystical approach.

The Holy Fathers tell us that this star can be compared to the  iraculous pillar of fire, which stood in the camp by night during  Israel’s Exodus, or the light from heaven, which overwhelmed Saul on his way to amascus. St John Chrysostom, in his Homily on the second chapter of Matthew, says God called the wise men by the things that  are familiar to them, for being astrologers they were naturally astonished at such a large star.  He says that God , for the  salvation of those in error, allowed  himself to be served by  astrology, normally used to serve the devil,  so that he might gently  draw the Magi away from their customs and lead them toward a higher  wisdom.

St. Maximos the confessor says that when the intellect is illumined  by the infinite Light of God it becomes insensible to everything made by Him, just as the eye becomes insensitive to the stars when the sun
rises. The Magi did not just drop off their gifts and leave, for they  left from the presence of Christ as men forever changed by their  experience. Their superior intellect and knowledge was confounded by  the presence of a little child born under the humblest circumstances.

St. Tikhon, the Patriarch of Moscow, once said that the Nativity of Christ communicated to people an understanding of God, and one’s  self, and the purpose of life. He tells us that in celebrating this  joyous feast, we must bring into our life the Light of Knowledge,  appearing as a star, and guiding us to Christ.

Brothers and Sisters, In keeping this great feast of the Nativity of  our Lord, we must receive this Light with joy, not putting it away at the end of the season, but rather Let your light so shine before men,  that they may see your good works, and glorify your Father which is  in heaven. (Mat.5:16).

CHRIST IS BORN!
GLORIFY HIM!

Most viewed articles
The Forgotten Virtue of Stability148
Utah Church Prepares, Welcomes All for Consecration103
‘The post-Roe generation’: Pro-lifers set their eyes on heartbeat bills, chemical abortion bans102
The Savior of the Hopeless, or Is It Possible to Be a Good Person and Not Be Saved?87
Supreme Court Overturns Roe v. Wade in Mississippi Abortion Ruling77
On the Shoulders of Giants43
Most popular authors
Hieromonk Gabriel148
Pravmir.com team103
Ryan Foley102
Alexander Tkachenko87
CBN News77
Archpriest John Moses (+2019)43