A wise rabbi was commenting on the growth of inter-faith marriages between Jews and Christians when he said “It really isn’t Jews marrying Christians as much as it is non-Jewish Jews marrying non-Christian Christians.” In other words if a person’s faith is really the biggest part of their identity, they will express that truth in the choices they make in life-long companions. If the faith is simply nothing more than a cultural decoration to their lives, then their chose of spouse will reveal that too.
Priest Chris Metropulos | 03 May 2010 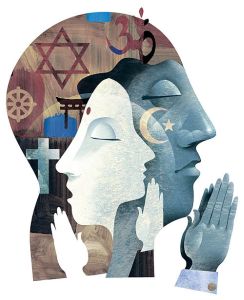 Well, maybe it isn’t. But I think it is a symptom of a potential weakness. Let me tell you why.

St. Paul said “Do not be yoked together with unbelievers. For what do righteousness and wickedness have in common? Or what fellowship can light have with darkness?” (2 Corinthians 6:14)

Now, to be sure, this passage is a general teaching about having close relationships with non-believers because these relationships can have a detrimental effect on your own spiritual growth and maturity, but the same principle applies to the closest of human relationships – husband and wife.

Some find the above statistic troublesome because they are concerned about preserving a particular cultural identity. Others are concerned that there are certain family traditions put at risk when Orthodox marry outside their own faith tradition. While these concerns may be valid, they really aren’t the most worrisome. No, in fact, my greatest concern about these marriages is that the very cause of their existence may tell us more about the faith commitment of the people involved that we’d like to admit. Young people fall in love. That is just a fact of life, but that fact should not mean we ignore the wisdom of the faith in making this life-changing decision about marriage. There’s just too much at stake.

For instance, why would a committed Christian believer want to enter into a spiritual covenant like marriage with someone who is not even a Christian? If our faith is really the center of our lives wouldn’t we desire to have a life-long companion who shares that central, spiritual character of our own hearts? A wise rabbi was commenting on the growth of inter-faith marriages between Jews and Christians when he said “It really isn’t Jews marrying Christians as much as it is non-Jewish Jews marrying non-Christian Christians.” In other words if a person’s faith is really the biggest part of their identity, they will express that truth in the choices they make in life-long companions. If the faith is simply nothing more than a cultural decoration to their lives, then their chose of spouse will reveal that too.

Here are some pastoral guidelines for choosing a spouse.

First, a spouse must be a Christian believer. This is the minimum requirement. While it may be fashionable to say that “all religions lead to the same place” it isn’t Orthodox. A committed Orthodox Christian who has made their faith the center of their lives and their identity cannot possibly believe that a life-long, healthy marriage can be made from the union of a committed Orthodox Christian and someone who rejects Jesus Christ as the God-Man Savior of all of humanity. It’s like trying to mix oil and water.

Finally, a spouse should agree to raise any children in the Orthodox Christian faith. Now don’t misunderstand me here. I’m not talking about making sure the children know how to make traditional, cultural food, as important as that may be. No, I’m referring to making sure that these precious children are schooled in and given examples in the fullness of their Christian heritage in authentic Orthodox Christian discipleship – daily prayers, home icon corners, regular church attendance, and serious participation in the Divine Mysteries of the Church.

Please know that none of the above is meant to discount the real emotions and committed relationships that occur in inter-faith marriages. But the exceptions prove the rule in this case. Our desire for our entering into the divine mystery of matrimony, especially from our Orthodox Christian teachings, demand we put our Orthodox Christian faith at the very center of our decision making process when we choose a marriage partner for life! There is more at stake here than just the temporary romantic feelings of a moment. Our marriage is a reflection of our Orthodox Christian commitment and nothing less than serious and faith-educated choices will do.

Let Us Lift Up Our Hearts

The fact is we were created to be worshipers. Fr. Alexander Schmemann once wrote that we humans are…