The Monk Who Waves at Planes 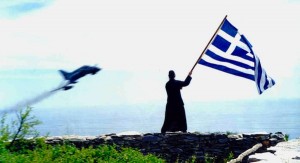 Whenever monk Joseph of Mount Athos hears the sound of an aircraft, he stands close to the edge of a cliff above the Aegean and waves a huge Greek – or sometimes Byzantine – flag at the Greek Air Force pilots flying over the peninsula of Athos in northern Greece. The pilots fly low in response to the monk’s special greeting, paying respect to the man who is known among the Greek Air force circles as the patron of pilots.

But how did this strange, yet fascinating greeting story begin? Some years ago, when monk Joseph traveled to the island of Skyros for a local fair, he also visited the airbase of the island. A pilot recognized him as the monk living on a Mount Athos top that happens to be a turning point for aircraft. After their acquaintance, the pilot used to fly low every time over that point so that he could greet the monk in this special way. Then the monk would wave back in response, until one day Joseph took a huge Greek flag and started waving it back at the pilot.

From that moment on, the story of the monk spread rapidly within the circles of the Greek Air Force and soon, one pilot after the other flying over the area, flew closer to the ground to meet the monk’s waving.

The story of the humble monk and the pilots circulated on the Internet and has become popular around the world. In every photo the monk stands at the edge of a steep cliff with a huge flag in his hands, while the pilots’ faces flying by are close enough to be recognized. Sometimes the peculiar greeting is met by ships of the Navy sailing close by the point where the hermit resides, while many pilgrims who happened to be at the scene have also joined monk Joseph in his greeting ceremony.

The hermit has now become a sort of patron or protector of pilots. He waves at them before they head to their air missions and waits for them to return and greet him in their own special way. Many pilots have visited the monk in his cell and presented him with souvenirs including an Air Force uniform with his name sewn on.

“I love them all like my children. I have also met some up close”, said the hermit Joseph in a conversation.

“Every day, when I hear the sound of airplanes, I dash from my cell. I go out and wave the Greek flag. I weep with emotion, as these young lads always, following any mission in the Aegean, come to greet me that I may give them my blessing. I have watched too many battles. I felt fear and pride. But the feeling I get after each engagement when they pass over my hermitage to greet me is indescribable … Some of the pilots came here and found me. We embraced, we talked, they opened their hearts. They revealed their problems. I feel that my words are words of God, and will make them even more courageous to defend everything in our Greece.”

Born in Corinth 55 years ago, monk Joseph was the son of a priest originally baptized as Christos. Before he became a monk he was known to the world as Christos Bairaktaris. He comes from the village of Agios Vasilios in Corinth, and the Greek Air Force has embraced him as part of its own family. In 1983, at the age of 25 he decided to become a monk in the Monastery of Megisti Lavra on Mount Athos. From there, he was sent to the cell of Saint Minas in the location known as Vigla, where he would be responsible of taking care of the 19th century small church. It is said that Joseph’s cell looks over the very point where the Persian military commander Mardonius lost half of his fleet at sea in 492 BC.

Monk Joseph is not fond of the media attention or flashlights, so he only shares his thoughts and words with the visiting pilgrims. He is one of the most well-known cantors of Mount Athos and often chants in churches and metropoles outside the monastic community of Athos, while he also attends religious fairs around the country.

“He is a saintly man, a biblical personality, who whenever anyone comes to meet him, opens a window to a world of goodness and love,” said George Vazouras, a pilot who visits him often.

A video of Monk Joseph waving to the Greek Air Force pilots is available here. 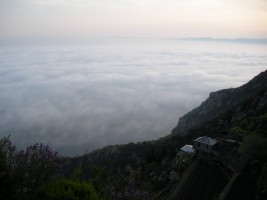 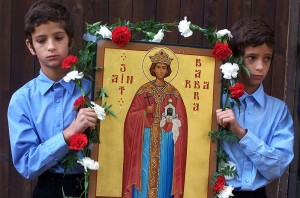 Source: Mission and State It will surprise some to learn that the Saint Barbara after whom…