Pascha Above the Clouds 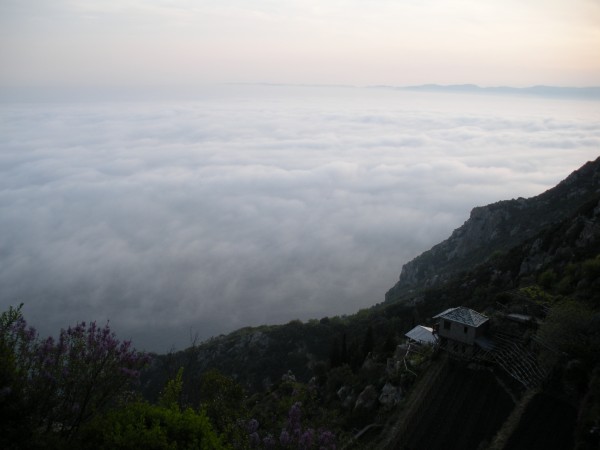 By a series of unforeseen events in the spring of 2009, I found myself arriving at the Holy Mountain, Mount Athos, for the end of Holy Week and Pascha. I don’t really speak Greek that well, and I am not someone who would normally go to a monastery, but I also at the end of the day have limited control over my own life. So, following the orders of my boss back in Athens, I walked into the Monastery of Osiou Grigoriou on the morning of Holy Thursday. I was tired from the overnight bus ride, grouchy and more than a little disoriented as I followed other pilgrims through the gates of the monastery. 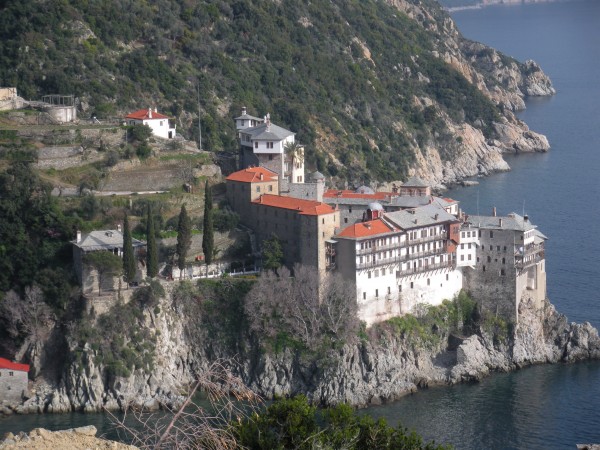 Photo: The Monastery of Osiou Grigoriou

As I walked in I was greeted not by monks, but by two college students from America, whom we’ll call Mike and Dan (mostly because those are their real names). I was shocked. Mike and Dan went to different colleges than I, but we all knew each other from OCF retreats and conferences. They happened to be visiting the exact same monastery on Athos as me on the exact same days. Mike was in graduate school in Thessalonica and Dan was studying abroad in the Netherlands and had come to Greece on vacation.

For the next two days, the three of us banded together to endure the monastery’s grueling liturgical schedule. We huddled together around our one English language service book in the back of the monastery’s church, and hiked around the monasteries property between services. All of our ascetical effort led up to that night, the night of our Lord’s resurrection. I didn’t know what to expect Pascha to be like on mount Athos. On the one hand, Pascha is Pascha, how different could it be? On the other hand, I never knew what to expect in this monastic castle next to the sea. 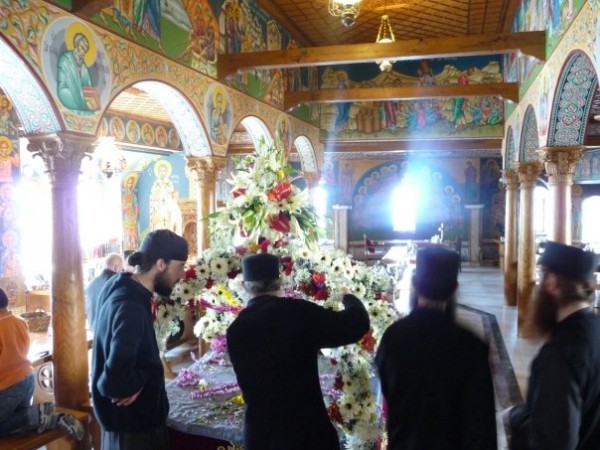 Around 9pm on Saturday the monks started reading the Book of Acts in the Church. We stood outside in the courtyard, chatting with a Georgian monk. The Paschal Service started at 11pm. With great anticipation, we all entered the dark church. There were only two candles lit, just enough light for the monks in the choir to see their books. The monks started chanting the solemn Canon of Holy Saturday, which focuses on Christ’s burial and entombment. Around midnight, the Canon having been completed, the last candles in the church were snuffed, and we stood in darkness, awaiting the announcement of Christ’s Resurrection. After a minute of pregnant silence and darkness, the doors of the altar were flung open, and a priest came out with a candle chanting:

“Come, receive the light, the unyielding gift of light, from the light that is never overtaken by night. Come glorify Christ risen from the dead.”

Everyone in the church went up to the priest and lit candles from his. The church became filled with light. We then made our way out into the courtyard of the monastery for the beginning of Paschal Matins. Under the bright stars, with a cool breeze off the water, we stood and listened to the Abbot proclaim the Gospel of the Resurrection. After the Gospel reading, Matins began. The first singing of, and requisite shouting of “Christos Anesti” soon followed. “Christos Anesti” or “Christ is Risen” is both the iconic hymn of the Orthodox Easter season, and the common greeting of the season. 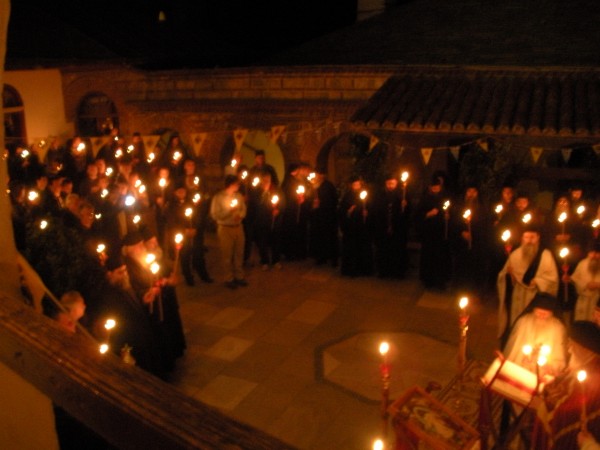 As we entered the church again, monks were waiting to shout “Christos Anesti!” at us, throw holy water in our faces, and shake bells at us. Immediately, we vaulted into the beautiful poetry of the Paschal Canon by St. John of Damascus. It was very moving to hear it in the original Greek.

Towards the end of matins, we all approached the Monastery’s clergy, to exchange the Paschal greeting with them personally. Many of the priests greeted me in English, which was nice to hear. During the singing of “Let God Arise” and the Paschal Verses, a monk grabbed a bunch of us young men and led us outside. What was waiting for us was a basket full of huge wooden poles that are used to call people to prayer (often called a Semandron). You put the pole over your shoulder and smack it with a mallet.  About fifteen of us ran around the church smacking these things while the monastery bells rang. It was quite a rush.

As Liturgy began, pilgrims and monks took turns singing “Christ is Risen” in their own language. Luckily, Mike is an amazing singer, and led us in a great rendition of the English version. We sounded much better than the impromptu slavonic choir, to almost everyone’s surprise.. Liturgy ended around 3:30am, and having feasted on God’s word and Christ’s body and blood, it was time to break the ascetic fast.

Now, for those of you who don’t know, Orthodox take lent rather seriously, and usually don’t eat animal products during the fast. We usually break our fast early in the morning will all types of wonderful meat and dairy products. However, the consumption of meat is not permitted on the Holy Mountain. So, as I sat down in the dining hall, I was greeted by a piece of fish, fish soup, feta cheese, bread, a hard-boiled egg, and some cake. While we all broke the fast, Father George, the elderly abbot addressed us all. We were allowed a luxurious twenty minutes to eat instead of the usual fifteen.

On Pascha morning, we all got to sleep in a little. Well, as much as sleeping can occur in a room full of snoring, old Greek men. We had a simple breakfast in the guest house, consisting of feta cheese, bread, hard boiled eggs and some sweets. The plan for the day was to hike to Simonapetra Monastery, which is the closest monastery to Grigoriou.

We started our trek sometime after noon. The hike isn’t all that long, it’s just up a giant mountain, via a rather precarious path. As we walked up the mountain, Mike shared with us a simple lesson.“Don’t look up,” he said, “ you’ll fall into despair seeing how far away the top is. Likewise, don’t look down, you’ll become prideful seeing how far you come. Just focus on where you are right now.” I was rather more concerned with falling off the loose-rock path down the cliff to an end that would certainly be messy. 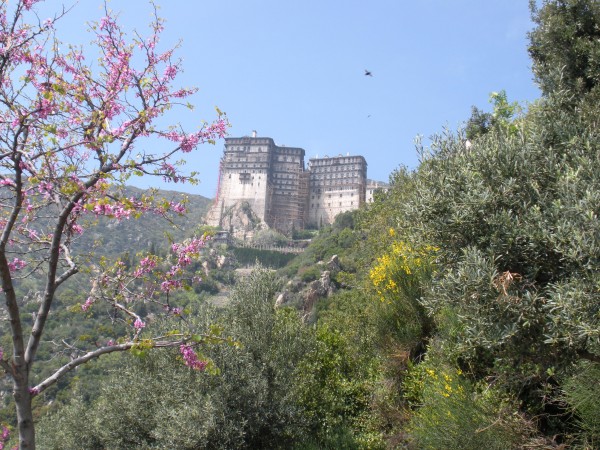 Photo: The Monastery of Simonopetra on Mount Athos

I was glad when we reached the gate of Simonapetra’s property. Little did I know, that it was another twenty minutes, uphill, to the monastery. This part of the walk was a little easier; it was on a sloping cobblestone road rather than a precarious path of loose rocks next to a steep cliff. When we finally got to the monastery, I was ready to collapse (I’m not in good shape now, and wasn’t then either) .We made our way to the Monastery’s guest house, as is the proper protocol. As I collapsed on the couch, Mike asked “How are you feeling?”

“Don’t Worry, the monks will fix you right up”

Was he right. An older monk came out of the little kitchen with a tray full of frozen chocolate treats and shots of monastic moonshine. Apparently, this is their secret weapon to combat fatigue from hiking. We all stood up, and shouted “Christ is Risen!” as we downed cold shots of what must have been at one point paint thinner. With that, I was ready to go again.

The Vespers of Pascha started around five in the afternoon. The church at Simonapetra is brand new (or newly restored, I was never really sure which) and has not yet been frescoed. The white walls were a stark contrast to the gold-leafed iconostas, and richly carved wooden appointments. Simonapetra is known for having the best choir on the Holy Mountain, and they didn’t disappoint. They were augmented by a group of young men from Syria, who sang portions of the service in Arabic. Traditionally, the Gospel reading at this service is read in as many languages as possible. The monks read it in Greek, Slavonic, German, Latin, French, Romanian, Arabic, and English. An American monk (there are two at Simona Petra) read it in English. 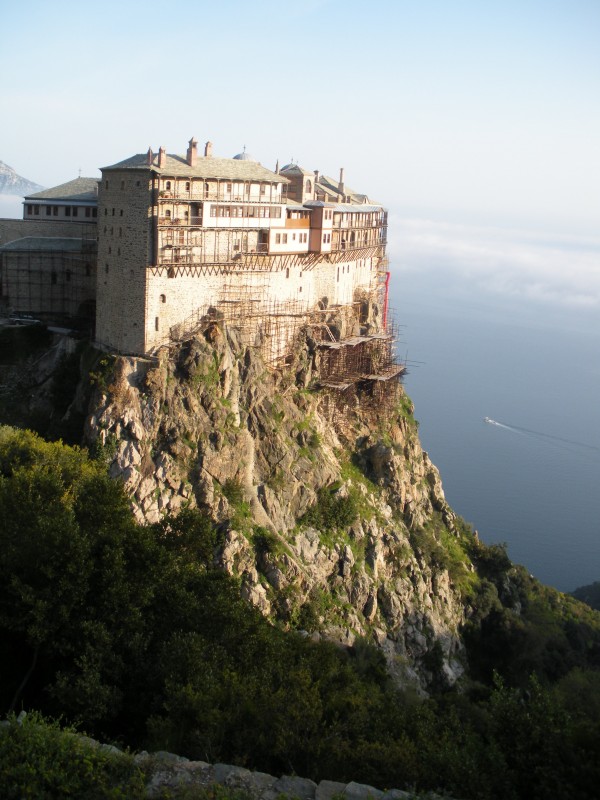 Photo: Simonopetra from the back

Father Maximos, one of the American monks, met with us and gave us a tour of the monastery. He is from Long Island and was formally a professor at Harvard. He showed us some of the monastery’s recent renovations, which include solar panels and a hydroelectric generator. The monastery gets 93% of its power from these two sources. He also explained the history of Simonapetra. The monastery was founded in the early 1200’s, which is remarkable in Church History. During the 4th Crusade in 1204, the Catholics decided to conquer the Orthodox too. During this “Latin occupation” virtually nothing happened in the Orthodox Church, except for this monastery being founded. Saint Simon, the monastery’s founder, lived in a cave. On Christmas Eve, he had a vision of the Mother of God telling him to build a monastery on the rock where it is presently located. He did, and he named it “New Bethlehem.” The other monks on Mount Athos didn’t really like this name, and took to calling it Simon’s Rock (Simonapetra) instead.

We talked with Fr. Maximos for a while, until we realized that the sun was setting. We had to high-tail it back to Grigoriou, before it got dark and they closed the Monastery’s gate for the night. As we walked out of Simona Petra, Fr. Maximos pointed out the odd cloud formations low over the water. He said this happens only once or twice a year. It makes it look like the monastery is sitting above the clouds. As we walked down into the cloud layer, I could only think that this was a perfect ending to an experience I will only ever be able to describe as other-worldly

Witnessing to the Kingdom in our Digital Age

Courtesy, patience, love are not just touchy-feely buzzwords, but expected behaviors of all Christians. Looking at our facebook…

Sermon on Acts 1:6-11 6 When they therefore were come together, they asked of him, saying, Lord, wilt…