The Most Sensible of Mavericks

For the Russian Orthodox belivers, it has been difficult to come to terms with the death of Patriarch Alexy II, who presided over the re-establishment of the Church for almost two decades following Soviet repression. The indefatigable head of the Russian Church sought reconciliation and a bond with society through faith in Christ, against the forces of history and inevitability. However, beyond his death, the memory of Alexy as Patriarch, championing belief, love and forgiveness through God in Russian society, will remain vibrant, meaningful and spiritually strengthening.
Andrei Zolotov Jr. | 06 December 2008 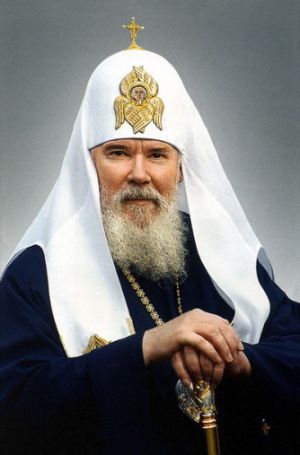 The Faithful Will Remember Alexy Forging the Bonds between Society and the Church, and thus Between Man and God

We realized, of course, that he was not immortal, and over the last few years we were dreading the day, with much anxiety, when he would leave us… That day has arrived. Just a few months shy of his 80th birthday, Patriarch Alexy II has died. It seems almost impossible to believe. After all, it was Alexy himself who has been with us for these past 18 years, when Russia made a dramatic turnaround as the Russian Orthodox Church has been rescued from oblivion.

Just four days ago, while finishing his regular course of treatment in Germany, Patriarch Alexy celebrated the liturgy in the Munich cathedral of the Russian Orthodox Church Outside of Russia (ROCOR) for the first time, having personally inscribed that unity, which was obtained one and a half years ago – before that, no head of the Russian Church ever served in the churches of the ROCOR. And just yesterday, on the feast of the Presentation of the Blessed Virgin Mary into the Temple, he celebrated in the Kremlin, in the Dormition (Uspensky) Cathedral, while on the eve of his death, Alexy prayed at the relics of his great predecessor, Saint Patriarch Tikhon. Such reports from the Church’s newsreel were altogether everyday items. But was it really possible even to think of something similar, when the almost disgraced metropolitan, who was only several years earlier banished from his post of Chancellor of the Moscow Patriarchate to Leningrad for his audacity in writing to the Central Committee of the Communist Party with the offer for wider participation of the Church in societal affairs, was elected on June the 7, 1990, as the head of the Russian Church?

A Russian nobleman, a European by origin and birth – some appreciable figure in society with a non-Soviet upbringing – Alexey Riediger was ten years old when the Soviet Union arrived in his native Estonia – but with a large experience of service as a bishop already in the Soviet conditions, the Patriarch in the last ten years actually proved to be the main link between everything torn apart by revolutions and wars in Russia’s thousand year old tradition. Perhaps that is why he felt the horror of civil war so sharply and opposed it – both in prayer and in action – both in 1991 and in 1993.

Maybe that is why in dealing with the management of the Church, Alexy acted as the unifier and the peacemaker to the bone, even when many around him implored him not to measure off, but to sever ties instead. The preservation of the unity of the Church was for him the central and utmost priority for the whole period of his service as patriarch – it was, after all, a time when everyone around him fomented each other. Looking back today at the 18 years of his patriarchate, what moderate observer can say that the unity of the Moscow Patriarchate in the post-Soviet era, the preservation of the Russian Church as a mystical, of course, yet earthly bond divided by borders and ideologies of the people has been predetermined? But to be exact it was under his direction that it became reality – against all odds!

In addition, within the Church, where the pressure between ultra-conservatives and the liberals reached a point of intolerability, Alexy cautiously led the Church along a path to tranquil openness to the world, which went against many of the “zealots.” Perhaps this was the case because unlike the overwhelming majority of us who have become members of the Church in the last ten years or so, and have devised our own lost tradition anew, Alexy was the person of the living and natural tradition which was not lost.

In conditions when church-state relations were built from scratch and the state lacked a clear-cut vision of its system, when an age-old inertia perennially drove the Church into nationalization, Alexy did not cease in repeating his own formula: the Church, separated from the state, but not separated from society.

During the period when tactical scheming and maneuvering all around us seemingly won the day, and the cascade of events forced us merely to react to them, Alexy was thinking decades ahead. Some years ago the editor in chief of the “Orthodox Encyclopedia” Sergei Kravets told me in an interview that everyone had been saying to the Patriarch, “We have no intellectual authorities to publish a multi-volume encyclopedia, let’s make a three-volume dictionary – it will be both more realistic and more useful.” But the Patriarch replied, “No, we must do an encyclopedia, so that in 25 years’ time an authentic, intellectual core of the Church will emerge amongst us around this work.”

Standing at the height of responsibility of his service, when each and every word of his was interpreted by this and that side, Alexy rarely had the occasion to appear to society in an informal manner. Such moments, when all of a sudden he abruptly broke the style of dialogue, are the more precious ones. For example, when parishioners of one of the churches in Moscow gave him a canary as a gift, he then sent an official letter to the dean of the church. The letter had the official letterhead, with the title and the other standard, grandiloquent hallmarks written on the paper, but followed with an additional note, “Tell the children that the canary is coping well and is now singing.”

Alexy had a tremendous memory for people and for faces; he remembered some person he had once seen years later, and used to ask about him. And when he spoke with you, he really did speak with you – personally, and not indifferently. And all the while, there were thousands, hundreds of thousands who made their way before him.

Once it so happened that on the last Sunday before Lent,  when in the evening-time, a very intimate Rite of Forgiveness is performed, a time when all the faithful make every effort to be at their own parishes, I found myself at the Christ the Savior Cathedral by necessity – as a professional journalist. Judging from the reactions of the majority of those present at the service, one could easily figure out that almost all of the congregation were not regular church goers, but visitors. It was a fine day; many people were strolling in the Moscow city center and just dropped in to the church. His Holines also understood what was going on; and so, his sermon was simple, as clear as day – the most basic elements of the faith. Having knelt down and asked everyone for forgiveness, Alexy spoke, “And now approach and I shall bless you for Lent.” And then hundreds, perhaps even thousands of mainly non-practicing and occasional practitioners of the faith stretched out in a line leading up to the Patriarch, asking him for a blessing. After some time one priest and then another one came up to the tired patriarch, suggesting to stand in for him (this was Alexy’s second service of the day). But Alexy refused to leave his place in the middle of the cathedral. After probably half an hour had passed, I got bored and decided to leave. But all the while the Patriarch stood there, giving his blessing to one person after another, to people who had hardly crossed the threshold of the church and won’t necessarily remain there.

You will be deeply missed, Your Holiness!

Andrei Zolotov, Jr. is a Nieman Fellow at Harvard University and the Founding Editor of Russia Profile.