The Mount of Transfiguration and the Bridal Chamber of Christ

If I had to use a single word to describe the one thing that is “everything” it would be Pascha (in its fullness). I cannot think of any part of the Christian life or revelation that is not gathered into the fullness of Pascha. It is one of the reasons that the liturgical celebration of Pascha is as utterly overwhelming in its Orthodox expression.
Archpriest Stephen Freeman | 17 August 2011 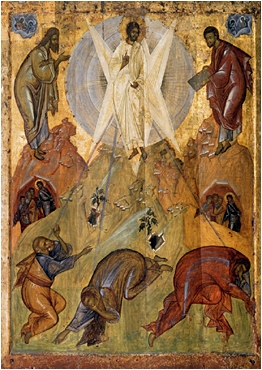 There is a propensity in our modern world to break things down – to analyze. We have gained a certain mastery over many things by analyzing the various components of their structure and manipulating what we find. It has become the default position for modern thought. This power of analysis, however, is weakened by its very success. Frequently the truth of something lies not in the summary of its parts but in the wonder of the whole.

This is certainly the case with the Christian faith. It is not uncommon for theology to be addressed under various headings: Christology, soteriology, eschatology, ecclesiology, hermeneutics, etc. It makes for an impresive array of titles on a seminary faculty listing. The problem, however, is that theology ultimately seeks to describe or state one thing (or it should). That one thing, however, is so large that it cannot be spoken with ease. The fullness of the faith is not revealed in the analysis of various constituent elements, but in the slow (and sometimes sudden) apprehension of the whole.

If I had to use a single word to describe the one thing that is “everything” it would be Pascha (in its fullness). I cannot think of any part of the Christian life or revelation that is not gathered into the fullness of Pascha. It is one of the reasons that the liturgical celebration of Pascha is as utterly overwhelming in its Orthodox expression.

Liturgy has a grammar, a way of speaking and revealing truth. This grammar does things that cannot be done as easily in discursive theological writing. I have written about this previously.

For one, Orthodox liturgical practice has a habit of bringing elements of the Christian story together that are frequently kept apart – particularly in our modern compartmentalized approach to the faith. There are “theological rhythms” within the Orthodox cycle of services. Each of the seven days of the week has a particular assigned theme (Mondays for the Angels, Tuesdays for St. John the Baptist, etc.). Every day on the calendar has one or more (usually many more) saints whose memory is kept on that day. There is also the cycle of feasts that depend on the date of Pascha, and others that are determined according to a fixed date.

These cycles are always meeting each other and bringing their own elements and insights into the service. Thus those who come to worship are never “just doing one thing” but are always presented with “several things.” And, greater than that, everything is brought together as a “whole” and not just a collection of parts. The “one thing” is seen at every service, even if one facet shines brighter than others.

August 6 (August 19 on the Old Caldendar – Ed.) marks the feast of the Transfiguration of Christ (this Saturday on the New Calendar). The Church remembers His transfigured appearance before the disciples on Mt. Tabor, with Moses and Elijah appearing with Him. The material used in the liturgical celebration of the feast looks at this event from almost every conceivable angle. One of those angles caught me by surprise the first time I encountered it. – it was occasioned by the normal confluence of liturgical structure – but gave me an image that left me speechless in wonder.

It came at Matins on the day before Transfiguration (known as the Forefeast). During Matins each day, there is the reading of “the canon.” This is a hymn that follows a particular poetic structure. It consists of nine odes, each of which takes its inner meditation from one of the nine traditional Biblical canticles of the Old Testament (such as the “Song of Moses” in Exodus 15:1 and following). The sixth ode is always a reflection on the hymn within the book of Jonah (whose three days in the whale is always seen as a “type” of Christ’s three days in the belly of the earth).

This is the verse that struck me:

Making ready for His friends a Bridal Chamber of the glory of that joy which is to come, Christ ascendeth the mountain, leading them up from life below to the life of heaven.

I have generally viewed the Transfiguration in its own “compartment.” I have extended that consideration to include reflection on the Palamite doctrine of the Divine Energies, since St. Gregory Palamas used the image of the Light of the Transfiguration for much of his theological understanding. But I had never made the leap to Pascha (to which belongs the image of the Bridal Chamber).

I found myself speechless. The idea was too full. The image of the bridal chamber and its affinity with Pascha is rich, in and of itself. The Church looks forward to the “marriage feast of the Lamb,” an image used for the close of the age and the fulfilling of all things. Pascha is that close and that fulfilling even though it also occurs at a particular moment in history in 33 A.D. The death and resurrection of Christ is the marriage of heaven and earth, the union of God and man, the fulfillment of all things. Having revealed to His disciples the “Bridal Chamber” (as far as they could bear to see it), He then begins to speak to them of His coming resurrection and His sufferings in Jerusalem

The Transfiguration is also the Bridal Chamber (and is described in many other ways as well). It is a glimpse, (out of sequence in a place where sequence has no place), of the fullness of Divinity. Christ appears with Elijah and Moses, the living and the dead, the prophets and the law, and speaks with them concerning His Pascha. And this happens in the context of the Divine Light – a brightness that was beyond the disciples’ ability to bear.

Our faith itself should have this quality of fullness about it – something that is greater than our ability to bear. Our compartmentalization of the world and our faith reduce both to bearable levels – but then we fail to live or to believe. Understanding begins with wonder – and wonder requires something beyond our normal limits. The Transfiguration is an invitation to the Bridal Chamber – the mystery of Christ’s death and resurrection in the depths of Pascha. Shame on us if we compartmentalize the event in a meditation on the Divine Light. The Light shines in the darkness for a reason, and for a reason the darkness does not comprehend it.

May Christ carry each of us into the Bridal Chamber of the glory of that joy which is to come – and bring us up from the life below to the life of heaven in the wonder of His Pascha! 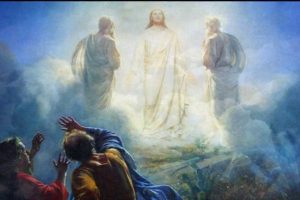 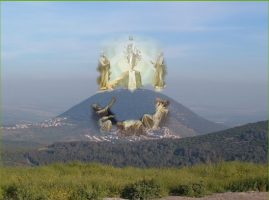 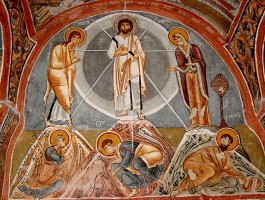 On a daily basis, I have become increasingly aware of the “religious” nature of almost the whole of…

Most viewed articles
COVID Directives From His Eminence Metropolitan JOSEPH165
Our Lenten Journey164
The Wrath of God According to St. John Chrysostom143
Moses and the Ten Words141
New Film about Orthodox Christian Vision on Climate Change120
Serbian Patriarch Porfirije Gives Interview to Serbian National Television115
In Church and at Home: Liturgical Resources for Great Lent87
Bishop Benedict of Bistrița in Relation to Young People: I Want to Be One of Them45
Why We Pray For The Dead1
How We Worship: the Struggle of the American Experience1
Most popular authors
Pravmir.com team235
Priest Luke A. Veronis165
Archbishop Joseph of New York and Metropolitan of All North America165
Archpriest Michael Gillis143
Archpriest Lawrence Farley141
Peter Samore87
Aurelian Iftimiu45