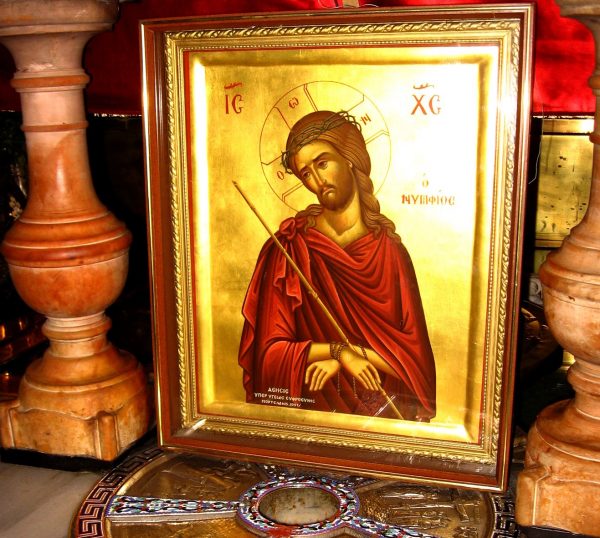 Among the more pernicious ideas that inhabit our contemporary world is the notion that we are all isolated, independent, and alone. Even when we gather, we think of ourselves as but one among many. Among the most glaring exceptions to this form of thought, however, are sporting events. People attend a football game and declare when it is finished, “We won!” or “We lost!” We feel genuine joy at the first and sadness at the second. We do not say, “They won” (unless we mean the opposing side). This is not actually strange. Sport has, from its earliest beginnings, been a religious experience. That said, it is an experience that we fail to consider or understand. It is also a shallow, meaningless, religion.

The mystery of sport is that we have some sense not only watching, but participating in what takes place. The team’s victory is my victory. The emptiness of this mystery is that what is being “participated” in has no substance or true being. We feel robbed when a referee blows a call and the game ends with the wrong winner. At such a moment the emptiness of the game is revealed. It had no more meaning than a mistake.

This meditation on sport is a very vacuous way to get at the notion of true participation (of which it is but the least shadow). True participation lies at the heart of all worship and much else in our lives. A marriage, at its best, is a participation, a literal sharing in the life of the other. The language of Scripture describes a spouse as “bone of my bone and flesh of my flesh.” What each does affects the other, both for good and for ill. The same is true for other relationships to lesser extents. St. Silouan said, “My brother is my life.” This participation is the very nature of love itself. We are commanded to “love your neighbor as yourself.” There can be no other form of love.

Scripture describes the knowledge of God as a participation – it is a sharing in His life. God can never be the “object” of our love for He is not an object. Because knowledge of God is by participation, Christ can say, “This is eternal life, that they might know Thee… and Jesus Christ whom Thou hast sent.” (Jn. 17:3) This, of course, is a great frustration to atheists who claim that God does not exist because they cannot perceive Him as object. The emptiness of modern life presumes that there is no participation anywhere, only life as an object among objects. Little wonder that modernity thrives on violence (if people are objects, then we can do violence without damage to ourselves).

Participation in the Holy

Our modern mind-set has difficulties with the long, exhausting services of Orthodox Holy Week. Each of the services is something of a liturgical presentation of the significant events of that day that led up to the death and resurrection of Christ. They are also a “deep-dive” into the rich meanings, both in the events themselves, but also in hearts of all involved. But more than this, the services constitute a participation in the events themselves. Just as the Holy Eucharist is a “participation” in the Body and Blood of Christ (1Cor. 10:16), so the various services of the Church are a participation in that which they represent.

St. Paul writes, “I am crucified with Christ, nevertheless I live.” (Gal. 2:20) The death and resurrection of Christ are not simply events that we think about, things that happened long ago that we think of as significant. The crucifixion of Christ (to use but one example) is an event of eternal reality (as an extension of its historical character), as well. It is not just eternal, but reaches out and includes all things. It is a misunderstanding when Christians say that “Christ died for me,” without also saying, “Christ died in me, and I have died with Him.” St. Paul describes this as the very nature of Holy Baptism (Rom. 6:3).

In Holy Week, we do not make an extra effort merely to engage in liturgical excess. We extend that which is contained in the Liturgy of every Sunday morning across the days of an entire week that we might concentrate our souls on every detail of that most holy sacrifice, and in that concentration, allow ourselves to become aware of the grace given to us in that holy union. The services are long because the days of that week were long. We exhaust ourselves because He was exhausted. At its deepest moment, Christ Himself asked if it were possible for all of this to happen some other way. Our own doubts and hesitations are thus sanctified, and participate in the agony of the Garden. St. Paul gives voice to our hearts in our longing for participation in Christ:

“…that I may know Him and the power of His resurrection, and the fellowship [lit. “communion”]of His sufferings, being conformed to His death, if, by any means, I may attain to the resurrection from the dead.” (Phil 3:10-11)

Christ gives Himself for us that He might give Himself in us. We give ourselves to Him, that we might be with Him: crucified, buried, risen. It is our inheritance in the Kingdom.

Good strength in the events of this week!