The Paradoxical Power of Mercy: A Homily on St. Panteleimon

The Lord Jesus Christ called upon the faithful to be perfect, even as the Heavenly Father is perfect. That means that there is some other path to perfection – a path that is accessible to people and truly leads them to God. The life of the Holy Great-Martyr Panteleimon indicates this path to us.
Archpriest Peter Gnedich (+1963) | 09 August 2015 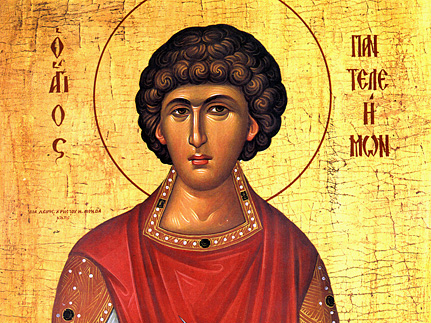 The Lord God is our Creator. He is eternal, immortal, and infinitely strong; but man stands far from God. But there is in man something that attracts Him towards God; and there have always been people who have wanted to be like unto God in power, glory, and majesty: these were kings, rulers, and conquerors. But they became intoxicated by earthly power. They thought that power would raise them above all other people, that the glory of their victories would make them immortal, that their strength would be measured by the number of ruined cities, conquered peoples, and gathered treasures. But their time passed, measured out by God, and they died, like the very least of their subjects. Their glory passed on, their strength crumbled, and the kingdoms they created were destroyed. And if people even remember their names, it is only for the multitude of crimes they committed. But all the same, man, created in the image and likeness of God, is attracted to his Prototype.

The Lord Jesus Christ called upon the faithful to be perfect, even as the Heavenly Father is perfect. That means that there is some other path to perfection – a path that is accessible to people and truly leads them to God. The life of the Holy Great-Martyr Panteleimon indicates this path to us. God is not only great, glorious, and powerful – He is also merciful. And the Great-Martyr Panteleimon we today call the “emulator of the Merciful One.” Emulating the Strong and Mighty is inaccessible to people, but to be merciful to man is accessible and possible to all. The Holy Great-Martyr was merciful. He was a physician who desired with all his heart to help people who were sick, suffering, and in need of his help. He gave himself over entirely to people, because he loved people. And then God shared His power with him. His help for the sick surpassed the power of earthly healing, and he became a grace-filled healer.

The Great-Martyr Panteleimon could be said to resemble God in His power. And along with that divine power came glory: glory that was not earthly and transient, but the glory with which God glorifies man. And when St. Panteleimon’s love for God increased so much that he gave his life for Him in martyric suffering, God granted him His Kingdom. The saint began his path by becoming merciful, and the Merciful God gave him everything: He gave him His power and glory, leading him into His eternal Kingdom.

The desire for God, the desire to be closer to Him is natural for man. The Lord Jesus Christ showed us how to achieve this. And he who follows this path, who is merciful, in whose heart there grows love for God and people – such a one will achieve his goals and come to God, entering the Heavenly Kingdom. Amen.