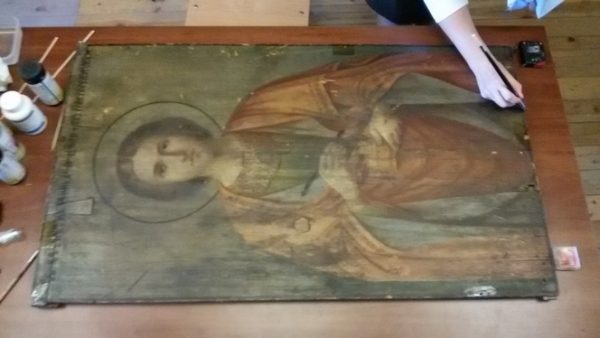 For some reason, the painter decided that it was an icon of the Great-Martyr Panteleimon. Maybe a trace of ochre at the bottom of the icon made her think so. It was the color with which the coffer — an inalienable element of the Healer’s image —could possibly be painted.

Nothing more was visible on that board except, maybe, two more little pink spots on the upper part.

So the painter decided to paint a new icon.

The next day a miracle happened.

After the fresh base coat, with which they had covered the board, dried, a clear image of St. Panteleimon appeared. But it was not in color, but in the form of a dark outline with half-shadows on a light background. The coffer did appear just where the traces of ochre were, and the pink spots were found exactly on the saint’s cheeks.

The painter brought that icon to the Church of the Prophet Elias in Cherkizovo. There it was sanctified.

That unusual event became a reason to meet with the painter. She showed me the renewed icon. In answer to the question, did she go to see the holy relics of Holy Great-Martyr Panteleimon when they were brought to Moscow, she said, that a week after her last pilgrimage to the relics, she was cured of kidney disease.

That very day, the ‘board’ was brought to her.

From the book of the Klin parish — the Moscow Eparchy of the Russian Orthodox Church. ‘The Christian Life’ fund, 1998. The internet issue of the Web-Center ‘Omega’, Moscow, 2001

Saint John of Kronstadt – One of the Most Unique Russian Elders

How did he manage to do it all? He had the ability - acquired, no doubt, by prayer…