When I left my small town for college, I needed to provide others with a clear, concise explanation of my faith, a log line for Orthodox Christianity. I developed my log line after realizing I had only thirty seconds to explain my faith before a person’s eyes glazed over. And as Campus Crusade for Christ and Evangelical Christians gained ground on college campuses, I was tired of my mumbled, “I’m Eastern Orthodox,” met by a blank stare. My new log line was for the simple: “Eastern Orthodox. It’s like Greek Orthodox or Russian Orthodox, only it’s from the Middle East.”
| 20 January 2010

As a cradle Orthodox Christian, for most of my life I’ve been quiet about my faith. My silence did not stem from apathy or ignorance, but rather from peace. There was never any reason to break my silence, until now when others want to listen.

In the 1980s, a small group of Evangelical Christians began their search for the New Testament Church, and they found the Orthodox Church. But the Orthodox Church was never lost, it was quiet. Hearing stories of an Orthodox Christian’s moment of revelation about the existence of the Orthodox faith puzzles me, since I never understand how our existence is a surprise. Although I’ve heard we were hidden away in ethnic communities, I never felt hidden at all. My family lived, and continues to live, an Orthodox life right out in the open world. We do live a quiet Orthodox life, and if you aren’t listening you may mistake our quiet for silence.

Explaining my Orthodox faith to others was always complicated for me. My friends growing up were Roman Catholic and all attended the same church in our small town. I on the other hand, was Antiochian Orthodox and went to a church sixty miles away in Los Angeles. We were different, and few people showed interest in learning about our unfamiliar faith. We weren’t trying to convert them, and they weren’t trying to convert us. My family has strong roots in Orthodox Christianity: three of my grandparents are from the cities of Jerusalem and Bethlehem, and my fourth grandparent is from Jordan. My parents were both born and raised in the United States as Orthodox Christians, and neither ever shopped for another faith. Now I am an adult with an impressive lack of knowledge about other Christian faiths, which never ceases to amaze my convert friends. My family never lost the Orthodox Church, and we weren’t silent, we were quiet. 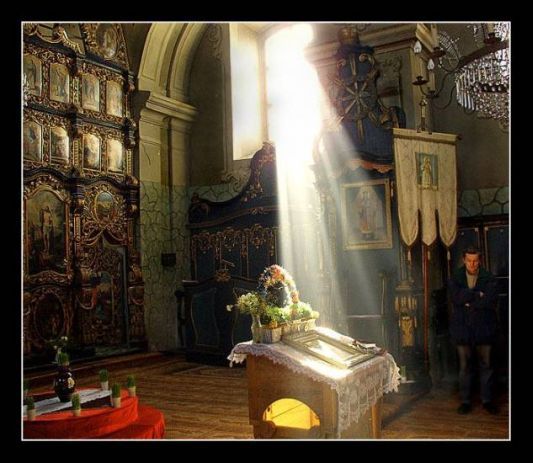 When I left my small town for college, I needed to provide others with a clear, concise explanation of my faith, a log line for Orthodox Christianity.  I developed my log line after realizing I had only thirty seconds to explain my faith before a person’s eyes glazed over. And as Campus Crusade for Christ and Evangelical Christians gained ground on college campuses, I was tired of my mumbled, “I’m Eastern Orthodox,” met by a blank stare. My new log line was for the simple: “Eastern Orthodox. It’s like Greek Orthodox or Russian Orthodox, only it’s from the Middle East.” And it saved me from the blank stare about sixty percent of the time. I admit to still using my log line, only today after years of practice my success rate is much higher, and I owe part of that success to the movie My Big Fat Greek Wedding. (But if I include the large word Antiochian, my success rate sinks.) Then the hurried glazed eyes sometimes smile and say in response, “Jesus just wants to get to know you better.”  Perhaps they even suggest He wants to be my friend. Then I politely rely on my familiar friend, not silence, but quiet. How do you explain your personal reverence for God to someone who isn’t listening?

We humans are all different, and some Christians are bigger and louder than others about their faith. I was never a big, loud Orthodox Christian. There was never a need for me to be big and loud about my faith because my family was Orthodox, my family’s friends were Orthodox and anyone I didn’t know who was Orthodox, knew my family or my family’s friends. Although I lived over sixty miles from the nearest Antiochian Orthodox Church, I was raised in an Orthodox community. A common link was our ethnicity, but we shared our Faith and lived our lives within an Orthodox community. Outside the Orthodox community, any discussion of my faith prompted a blank stare and glazed eyes. I knew other Christians didn’t understand Orthodoxy, but I was never armed to explain my faith to those who seemed disinterested.

An Orthodox Path for Life

When I was baptized as an infant in the same Orthodox Church where my parents married, my journey as an Orthodox Christian began. There was never any doubt I would be raised Orthodox, marry Orthodox, baptize my children Orthodox, and then die Orthodox. No confusion and no shopping for another faith, I was on the Orthodox Christian path for life…and I wasn’t lost. Intertwined with my Orthodox path for life was a sense of peace. I’ve never felt I needed to rush my faith, or needed to scurry around looking for others to travel with me on my journey. My fellow travelers were those in the larger Orthodox community. Christians of other faiths were on their own journey, of which I confess, I knew little.

The most difficult of these Christian journeys for me to understand was the path of Protestants. I admit my understanding of Protestants never progressed much farther than knowing their faith was a newer form of Christianity. With the concept of new (sixteenth century) and Christianity linked, I lost interest in learning more. Where was the relevance to my Orthodox faith in anything from the Protestant Reformation?  I was on my journey with fellow Orthodox travelers, and the Protestants and other Christians were on their own separate paths. Or so I thought until the paths began crossing.

Now I attend an Orthodox Christian Church with a mix of convert and cradle Orthodox. My view of the larger Orthodox community has broadened, and within this broader Orthodox community I meet other Christians who have found Orthodoxy after their travels along another path. I ponder their surprise at my ignorance of these other Christian paths, and it’s clear my lumbering travel along an unwavering road confuses them. The problem is, for years we all lived in the same neighborhood, but we never spoke. We each kept to ourselves and if we did speak together, our attention span was short. I wasn’t looking for those of another faith to bring with me on my journey, and I was discouraged by blank stares and glazed eyes. My faith felt personal, and sharing it beyond the Orthodox community was always awkward for me.

Now our ancient Faith is on firmer footing in America as more Christians seek the Orthodox Church. With the new converts come their friends and family, and the Orthodox community is blending into a broader community. Some converts, with a collection of souvenirs from their former Christian paths are committed to a fast paced, high energy Orthodox journey. They glance at my ease and comfort with the Orthodox faith and ponder the lumbering pace of my journey, perhaps forgetting the length of time I’ve spent traveling. Since birth, my travel has never detoured away from the Orthodox Christian path for life. I haven’t collected souvenirs from any other path, and my slow lumbering pace reflects my peace with Orthodoxy. Our journeys may have begun differently, but now our Orthodox paths have crossed. I was never hidden, or lost. I was quiet. But when you listen closely, aren’t you surprised by what you hear?

Wearing the garments of the Orthodox faith which I’ve acquired over time, I lumber along the Orthodox path with this broadening mix of fellow travelers. As I glance around, I see those beside me on the path with souvenirs filling their pockets, and I watch as they ponder which souvenirs to lay aside and which to hold onto for this Orthodox journey. Choosing to lay aside familiar souvenirs is difficult and many hesitate. But the garments of the Orthodox faith are well fitting, have only limited pocket space, and are worn with a quiet sense of faith.

When the small group of Evangelical Christians found the Orthodox Church in the 1980s, the Church was here, preserved by those who brought their faith with them to the United States as immigrants. These Orthodox immigrants maintained the Church with a sense of quiet, which suited their personal reverence for God. Within the Orthodox faith quiet is a component, or a garment, of the traditions of peace and humility. The well fitting garments of Orthodox Christianity do not change over time, even over centuries, but Orthodoxy does adapt to maintain its place within contemporary society. Our current challenge is adapting a broadening Orthodox community to the present, while preserving the quiet reverence for traditions of the ancient Orthodox Faith.

Timișoara: Midnight Liturgy and procession with relics on 65th anniversary of canonization of St. Joseph the New

The Holy Hierarch Joseph the New of Partoș reposed in the Lord in 1656. After 300 years, the…

A conference titled “World Orthodoxy: Primacy and Conciliarity in the Light of Orthodox Teaching” opened at St. Sergius…

One of the recurring statements in St. Isaac the Syrian’s homilies is that we will not be completely…

Most viewed articles
Our Prayers Should Not Be in the Form of Bargaining134
Conference on the 100th Anniversary of the Russian Church Abroad to Be Held in Belgrade in November104
Of Snakes And Men102
Happy (Church) New Year!100
Glorying In Our Weaknesses85
Representative of the Russian Church at the G20 Forum Stands Up for Believers in Africa and Ukraine63
Conference “World Orthodoxy: Primacy and Conciliarity in the Light of Orthodox Teaching” Starts Today38
Timișoara: Midnight Liturgy and procession with relics on 65th anniversary of canonization of St. Joseph the New26
The Cross, the Goo, and the Butterfly1
Most popular authors
Pravmir.com team201
Abbot Tryphon134
Deacon Andrei Psarev104
Fr. James Guirguis102
Archpriest Michael Gillis85
Aurelian Iftimiu26
Fr. Jeremy1