The Raising of Saint Lazarus- a Symbol of the General Resurrection 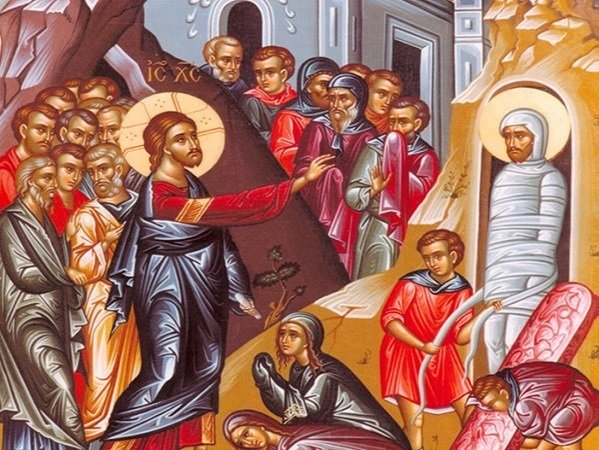 Great Lent has been completed and ends with two splendid festal days. These are Lazarus Saturday, on which we commemorate the raising of Christ’s bosom friend, Lazarus; the other is Palm Sunday, when we celebrate Christ’s triumphal entry into Jerusalem six days before he was betrayed and suffered death on the Cross.

Today we see the raising of Lazarus, a miracle performed by the Lord before he entered the city of Jerusalem. Lazarus lived in Bethany with his sisters, Martha and Mary. He was a friend of the Lord’s. At some point he fell very ill. His sisters sent a message to the Lord, telling him his beloved friend was sick. When Jesus learned of this, he said: ‘This illness hasn’t happened to bring death but to be the reason for the manifestation of the glory of the Son of God’.

When Jesus saw the sisters and their friends sobbing, ‘he was deeply moved in spirit and troubled’. He ordered the stone covering the tomb to be removed. Once this had been done ‘Jesus called in a loud voice, “Lazarus, come out!”. The dead man came out, his hands and feet wrapped with strips of linen, and a cloth around his face’.

Jesus wept because, on seeing the death of his friend, he also beheld the victory of death over the whole world. He saw how death, which was not created by God, had seized his throne and now reigned over the whole world. Then came the command ‘Lazarus, come out’. At this point what dominates is the miracle of love which triumphs over death, a promise which announces Christ’s war with death, a promise that death itself will be destroyed and made to disappear. Jesus wept at the fact of the death of his friend, Lazarus, demonstrating that the pain of death should be foreign to us. He can’t hide his sorrow and distress.

The raising of Lazarus and the gathering of a large assembly of people disturbed the high priests and the Pharisees, who decided to kill Jesus and Lazarus, as well. They didn’t manage to do so to Lazarus, but they did crucify Jesus a few days later.

Six days before Easter, Jesus sat at a dinner given for him. Lazarus was with him and a large crowd of people had gone to see not only Jesus but also Lazarus who had been raised.

According to Saint Epifanios, Bishop of Konstantia in Cyprus, righteous Lazarus was thirty years old at the time, and lived a further 30 years after being raised. One tradition has it that, in order to escape the hatred of the high priests, Lazarus fled to Kitio in Cyprus in about 33 A. D.

Here he met the Apostles Paul and Barnabas as they were going from Salamina to Paphos. They consecrated him as the first Bishop of Kitio, a see he founded himself. He acted with love and affection as the shepherd of the Church there and served for some eighteen years, until the end of his life.

Four-day dead Lazarus experienced death and decay. But beyond death and decay he had a face to face encounter with eternal life, with the living God. For our sake and for the sake of the message of eternity, the Lord called Lazarus back to this painful and difficult life, which he completed with a martyr’s death. He took him out of eternal, wonderful peace so that he could act as a witness to life.

Today’s feast and that of tomorrow both serve as prefaces to the Lord’s Cross. They’re both imbued with the Lord’s impending victory over hell, that is death, in ecclesiastical and Biblical terms.

Lazarus is the personification of the whole of the human race, of each of us separately. Lazarus’ home town, Bethany, is the home of all of us, according to Father Alexander Schmemann*. He’s presented to us, raised, at the threshold of Holy and Great Week as a harbinger of Christ’s victory over death. Moreover, the raising of Lazarus announces the resurrection of the dead, which comes about as a consequence of the Resurrection of the Lord: ‘Before your own death, Christ, you raised from hell Lazarus who was four days dead and you shook the domain of death’ (Lauds at Mattins, Lazarus Saturday).

With his being raised, four days dead Lazarus comes today to remind us that we, too, with the flesh (which is likened to his sister, Martha) and the soul (which is in charge of the body and is likened to his sister, Mary) should turn to our Lord Jesus Christ so that he can raise our mind from sin and death and that we, too, can have the opportunity to gaze upon his face.

* ‘Lazarus, the friend of Jesus, personifies the whole of mankind and also each man, as Bethany — the home of Lazarus, — stands for the whole world — the home of man’. Archpriest Alexander Schmemann, Great Lent: Journey to Pascha (1969; revised ed. 1974).