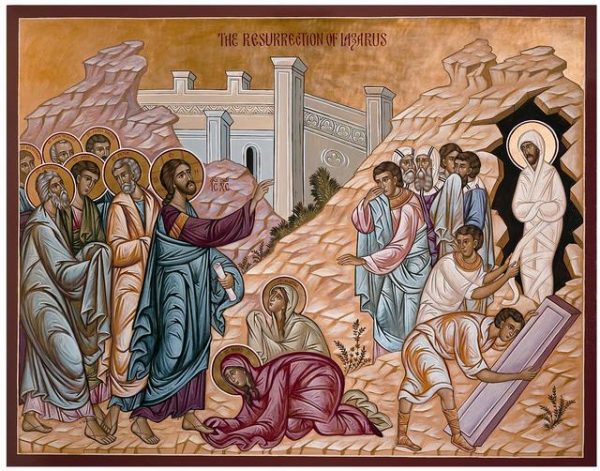 Largely ignored by much of Christendom, the Orthodox celebrate “Lazarus Saturday” on the day before Palm Sunday. It is something of a “prequel” to the next weekend’s Pascha. It is, indeed a little Pascha just before the greater one. And this, of course, was arranged by Christ Himself, who raised His friend Lazarus from the dead as something of a last action before entering Jerusalem and beginning His slow ascent to Golgotha through the days of Holy Week.

One of the hymns of the Vigil of Lazarus Saturday says that Christ “stole him from among the dead.” I rather like the phrase. At Pascha there will be no stealing, but a blasting of the gates of hell itself. What he does for Lazarus he will do for all.

Lazarus, of course, is different from those previously raised from the dead by Christ (such as the daughter of Jairus). Lazarus had been four days dead and corruption of the body had already set in. “My Lord, he stinks!” one of his sisters explained when Christ requested to be shown to the tomb.

I sat in that tomb in September of 2008. It is not particularly notable as a shrine. It is, today, in the possession of a private, Muslim family. You pay to get in. Several of our pilgrims did not want to pay to go in. I could not stop myself.

Lazarus is an important character in 19th century Russian literature. Raskolnikov, in Crime and Punishment, finds the beginning of his repentance of the crime of murder, by listening to a reading of the story of Lazarus. It is, for many, and properly so, a reminder of the universal resurrection. What Christ has done for Lazarus He will do for all.

For me, he is also a sign of the universal entombment. Even before we die, we have frequently begun to inhabit our tombs. We live our life with the doors closed (and we stink). Our hearts can be places of corruption and not the habitation of the good God. Or, at best, we ask Him to visit us as He visited Lazarus. That visit brought tears to the eyes of Christ. The state of our corruption makes Him weep. It is such a contradiction to the will of God. We were not created for the tomb.

I also note that in the story of Lazarus – even in his being raised from the dead – he rises in weakness. He remains bound by his graveclothes. Someone must “unbind” him. We ourselves, having been plunged into the waters of Baptism and robed with the righteousness of Christ, too often exchange those glorious robes for graveclothes. Christ has made us alive, but we remain bound like dead men.

I sat in the tomb of Lazarus because it seemed so familiar. But there is voice that calls us all.