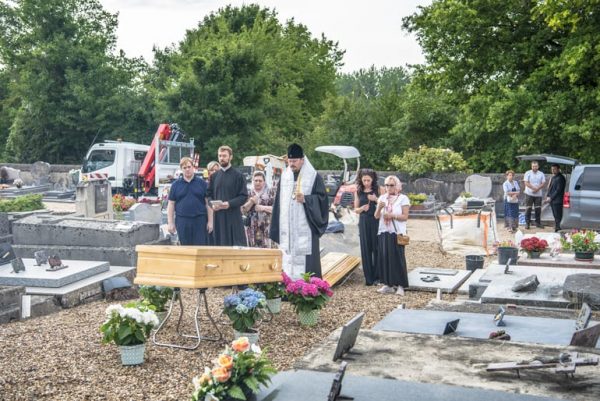 On July 23, 2022, the remains of Archbishop Feofan (Bystrov) of Poltava and Pereyaslavl’ arrived in St Petersburg from Paris for reburial. The bishop’s relics were greeted at Pulkovo Airport by representatives of the organization “Lestvitsa” and distant relatives of the late hierarch.

The coffin was then taken to St Alexander Nevsky Lavra, where Archbishop Feofan was met by Orthodox faithful, many of whom venerated it. It was then interred in a crypt at Holy Trinity Cathedral, where Metropolitan Antony (Melnikov) and Metropolitan (Vorontsov) are also laid to rest. A funerary litiya was performed for the hierarch from abroad by Hieromonk Alexy (Stepanov).

One of the organizers of the return of the remains of Vladyka Feofan, Pavel Dubrov, called the event historic, and not yet properly appreciated.

“For many years I have produced the series ‘Lavra Meetings’ on Soyuz TV,” said Priest Anatoly Pershin. “Once a family from Latvia came to our studio, an Andrei Kurasin and Irina Izvekova, who lead a youth group called ‘Lestvitsa.’ They told me the story of Vladyka Feofan, ‘the New Recluse,’ the spiritual father of the Royal Family. They were the initiators of the project to return the hierarch’s remains to the Russian land. We broadcast this plan throughout the world. There were many difficulties in bringing his remains home, despite the blessing of His Holiness Patriarch Kirill and His Eminence Metropolitan Varsonofy. The last minute there were some irregularities in the paperwork, and customs held up the move We prayed here to the Royal Passion-bearers, and the matter was resolved. This was a miracle which occurred before our very eyes.”

Egor Kurasim, the son of Irina and Andrei, said that some time ago he moved to Moscow and helped his parents obtain the necessary documentation. “Lestvitsa” works with Russian children and youth in the Baltics. Its directors, having met Pavel Dubrov, a long-time admirer of Vladyka Feofan, decided to help move his remains back to Russia. They found his grave, which was in a terrible state, participated in his exhumation in person and spent eight years working on the formalities. “I am happy that the spiritual father of the Royal Family returned to his historic homeland. This should help unite society,” said Mr Kurasin.

The coffin with the remains of Archbishop Feofan will stay at St Alexander Nevsky Lavra until July 28.

Feofan of Poltava (born Vassili Dimitrievich Bystrov) was a Russian archbishop and theologian in the Eastern Orthodox Church, born on 12 January 1875 and died 19 February 1940 in Limeray, France. He was widely known as the “only Russian ascetic bishop”. A few times he was the confessor of tsar Nicholas II of Russia and his wife Alexandra.

Vladyka or Basil was born in the village of Podmoshie, Luga, Leningrad Oblast and baptized on the day of St Basil the Great. In 1896 he finished his studies at St Petersburg Theological Academy, which he had entered as one of its youngest students. The year after he became assistant professor in history of the Old Testament. In 1898 he became monk and given the name of Theophanes the Confessor; in 1901 he was elevated to the rank of archimandrite. In 1905 he received his master’s degree on the Tetragrammaton. He was friendly with Gregory Rasputin, “who amazed us all with his psychological perspicacity,” and invited him to his apartment. Feofan introduced him to Milica of Montenegro, who on her turn introduced Rasputin to the Imperial couple on 1 November 1905. Two weeks later Feofan was invited and became their spiritual guide. In 1908 he (and brother Makary) visited Rasputin in his home village Pokrovskoye and investigated his supposed Khlyst behavior, after charges in the year before.

In 1901, Feofan had already become inspector, and in 1909 he was appointed rector of St Petersburg Theological Academy. Feofan was a devout monarchist and came to the conclusion that Rasputin was a garrulous person, a false elder and could be a danger to the throne. Feofan and Rasputin had a falling out. In 1910 Feofan moved to the Crimea (Tauris and Simferopol), because of his health. In 1911, the hierarchs Hermogenes, Iliodor and Feofan were banned due to a conflict with Rasputin and Empress Alexandra Fyodorovna.

In 1912, Theofan was appointed as bishop in Astrakhan, but his condition got worse; in March, 1913, he was consecrated Bishop of Poltava. From 1917–1918, he lived in Moscow and testified about Rasputin and the Empress. He became involved in local politics. In 1919, he was evacuated to the Sevastopol. In 1920, he emigrated to Constantinople. From there he moved to Petkovica monastery, Serbia, Sofia and Varna, Bulgaria. From 1931 he lived in Clamart, and Mosnes France, and leading the life of a hermit.