The Sacrifice of Worship 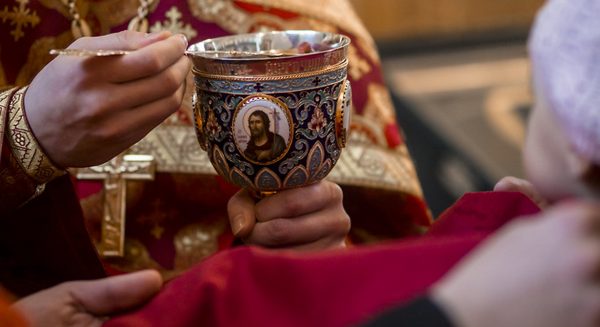 When God asked Abraham to sacrifice his son, Isaac (Genesis 22), there was no questioning on Abraham’s part about what was intended. He understood precisely what was involved in such a thing. There was wood to be gathered, an altar of stones to be constructed, the victim to be bound, and then the slitting of its throat with the gushing forth of blood, all consummated in the burning fires of the now-completed offering. What Abraham did was repeated in a variety of forms throughout the ancient world. Homer writes about Poseidon being absent from the Hellenic scene in order to attend a massive sacrifice in Libya. Sacrifice itself was part of the universal language of ancient religion. What differed was what/whom was being sacrificed and to Whom/What the sacrifice was being made. This was worship.

Today, “sacrifice” has passed into more generalized cultural metaphors that have nothing to do with worship. “Worship” itself has become a vague concept, generally associated with prayer/praise and hymn-singing. As such it has become increasingly difficult to distinguish what many contemporary Christians describe as “worship” from the treatment of various Rock, Sport and Entertainment stars (or patriotism and ideological fetishes).

At a large gathering of some tens of thousands, hands are lifted in the air, people are singing, the music swells. If I stop the description at that point it is possible to assume that this is a moment of praise/worship. If, however, I note that the venue is a concert, then it’s mere adulation of a celebrity. But the grammar of the action is utterly the same.

Fast forward to the setting of an Orthodox Church. Here there are numerous icons of holy men and women (saints) adorning the Church. Candles and lamps burn before them. A non-Orthodox contemporary Christian, visiting for the first time, becomes distinctly uncomfortable and thinks to himself, “They are worshipping saints!” Somehow, the psychological confusion that is contemporary culture can distinguish between the worship of God and the adoration of celebrities but accuses traditional Christianity of violating the second and third commandments.

What we have is a clash of grammars.

I suggest a working definition for contemporary worship: any number of activities, including singing, dancing, waving hands, shouting, weeping, when in a religious setting. The same actions in a non-religious setting are not worship.

The trouble comes when one grammar seeks to understand the other. That which the Orthodox render to saints and holy objects (relics, the Cross, icons, etc.) is understood to be honor or veneration. No sacrifices are ever offered to saints as though they were gods. This distinction is difficult for contemporary Christians because the notion of sacrifice, in its original meaning, has been lost.   It is certainly the case that honor and veneration are given to God, but they do not, of themselves, constitute worship.

The contemporary roadmap of religion consists almost exclusively of various psychological states. The honor given to a Rock Star is understood to differ from that given to God based on the intention within the person who is giving the honor. To an outside observer, the actions might appear indistinguishable. But, “God knows the heart.” And so, “God can tell the difference between the two.”

My son was around eleven or twelve when he first encountered a patriotic event within a Church. He had grown up in the Church (Episcopal) and had become Orthodox a year or so earlier. However, we were on summer vacation with family who were faithful Baptists. That Sunday was also July 4th. The Church service consisted of patriotic songs and a sermon on Christian America. My son was deeply upset. On the way home, he expressed his distress and kept insisting, “That’s idolatry!” In hindsight, I think he was right and I think the seamless ease with which that particular group of Christians could move from religious event to patriotic is more than a little problematic.

Sacrifice has largely disappeared from the experience of contemporary Christianity. The Protestant Reformation mounted something of a frontal assault on medieval Catholicism’s treatment of the Eucharist as a sacrificial offering. Catholics were accused of “re-sacrificing” Christ, despite the clear statement of Scripture that His sacrifice was once-and-for-all (Heb. 7:27). Catholics defended their practice by explaining that the Mass was not a re-sacrificing, but the re-presentation of that once-and-for-all sacrifice. Their arguments fell on deaf ears.

It is all well and good to say that Christ’s sacrifice on the Cross was once-and-for-all, and to file it away as such. However, such historicizing of the Cross places ever more distance between the believer and the event. “Do this in remembrance of me,” (as mere memorial) has come to be a means of forgetting.

The Scripture reminds us that the “Lamb” was “slain from the foundation of the world.” That, is, the death of Christ occurs within history, but has an eternal reality that transcends history. The Catholic contention that the Eucharist is a re-presentation of that sacrifice in the present was, in fact, correct and a restating of the received teaching of the Church. The Orthodox to this day continue to emphasize this understanding. The Eucharist is described as the “bloodless sacrifice,” meaning that there is no “re-shedding” of the blood of Christ.

The mystery of our salvation, as well as the mystery that we describe as worship, is found within the sacrifice of Christ. Abraham, and all of ancient Israel, would have understood worship to largely be identical with sacrifice. The Psalms of praise were written for use within the context of the Temple and its sacrifices. Praise could be described as “sacrifice” only by analogy.

Let my prayer be set forth in Your sight as incense,
The lifting up of my hands as the evening sacrifice.

Christians of the first millennium-and-a-half understood that the “bloodless sacrifice” of the Eucharistic offering was the central act of worship. Their hymns and psalms happened as part of that context. We no longer offer the sacrifice of bulls and goats, but we continue to offer the bloodless sacrifice of Christ’s death. It is the single, perfect offering of all humanity, made through the Person of God’s Son. Because he is also God, that sacrifice is eternal, always present and able to be offered and shared by His people.

Look at this piece of Scripture. St. Paul is explaining our true worship to the Corinthians:

St. Paul’s entire understanding of the Eucharist is rooted in its sacrificial character. The Eucharist is the Christian sacrifice, once and for all. This is also at the heart of Christ’s teaching that whoever eats His flesh and drinks His blood has communion with Him (Jn. 6).

By a strange twist of history, the praise that took its meaning from the sacrifice itself, by analogy, has come to displace the sacrifice and made praise itself the essential element of worship. This confusion not only creates false accusations against those who offer praise and honor to the saints of the Church as well as all holy things, but also makes all praise and honor, including that accorded to celebrities more than a little problematic.

Of course, the absence of ritual sacrifice in most modern religions does not mean that idolatry has ceased. However, our analysis of idolatry should remain focused on sacrifice rather than the objects of mere adulation. The ancients often made sacrifices to obtain favors or to avert disasters. Idolatry sought to control the outcome of history through the management of the gods. By that understanding, idolatry is alive and well and is the primary object of the Modern Project. Having abolished the ancient sacrifices, we have replaced them with science, technology, politics and war. Rather than learning how to live well, we make sacrifices to technology so that we might not need to live well. Modernity is building “heaven on earth” and needs no gods beyond itself.

Perhaps Modernity has itself become our god.