To a Christian, baptized into Christ and having put on Christ, in a very real sense the world has already ended. It can never be what it was to us before. We die to the world and rise to Christ. The actual, physical end of the world (or even the actual, physical end of me!) is the external experience of what each Christian is already supposed to know as an interior reality. We are already dead.
Fr. John J. Dresko | 04 June 2011

“But of that day or that hour no one knows, not even the angels in heaven, nor the Son, but only the Father. Take heed, watch; for you do not know when the time will come. It is like a man going on a journey, when he leaves home and puts his servants in charge, each with his work, and commands the doorkeeper to be on the watch. Watch therefore – for you do not know when the master of the house will come, in the evening, or at midnight, or at cockcrow, or in the morning – lest he come suddenly and find you asleep. And what I say to you I say to all: Watch.” 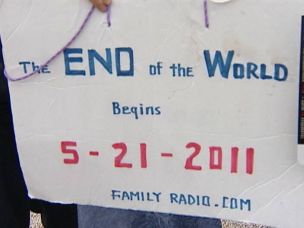 Famine. Earthquake. Flood. Fire. Sword. Invasion by enemies. Civil War. What do all these things have in common? These are the things we pray God that we be spared when we celebrate the Litiya (blessing of loaves, wheat, wine and oil) at Vespers. They are also the things that many people have been proclaiming would happen on May 21st, or, in a revised “prophecy” due to a “miscalculation,” October 21st.

When He said the words above, Jesus was sitting on the Mount of Olives opposite the temple and answering the question posed by Peter, James, John and Andrew: “Tell us, when will this (the end of the world) be, and what will be the sign when these things are all to be accomplished?” (Mk 13:3). Even then, among His disciples, there was an intense, even morbid, curiosity about such things!

He tells His disciples that among the signs of the end will be those who claim to be Him, wars and rumors of wars, earthquakes, famines — but all these are just the “birth-pangs.” His disciples will be delivered up to trial, the gospel must be preached to all nations, families will turn against one another and then it is time to flee to the mountain tops. And after all that, the sun will be darkened, the moon will not shine, stars will fall from heaven, and the Son of man will come in clouds with great power and glory and send His angels to gather His elect. But then we hear the words above. And Jesus is really saying two things:

No one — not the angels in heaven or even the Son of God — knows when that will happen except the Father.

If Jesus Christ Himself said that He didn’t know when these things would happen, how could some tealeaves reading psychic or apocalyptic prophet determine that the date for the end of the world is in May or October, or even on any other date? Isn’t it true that the signs of the “end times” have been with us at all times since the coming of Christ? Jesus also told His disciples that “this generation will not pass away before all these things take place.” (Mk 13:30) We have been living in the end times since Jesus Christ was born to redeem the world. There are no new revelations to come. There are no new prophets to proclaim the Word of God. The Word of God became flesh for us, died for us, was buried for us, and rose for us. All so that we might reside right now in the Kingdom of God made manifest in the life of the Church.

When it does happen, it will be a surprise despite His warnings, and the faithful servant will not be found sleeping.

If the Lord Jesus Christ urges each of us to watch and be vigilant, don’t you think it would just be bad press to end the world on a pre-announced date even if through a “prophet”? It would prove all the doomsday prophets right. People that are never vigilant will be vigilant on that day (if they are convinced that the world will end). And what about all those people holed up in the mountains with freeze-dried food and weapons? How are we going to root them out?

Myself, if I were God, I would come on July 10, 2013. Talk about sneaking up on people! Seriously, if Jesus didn’t know when the world would end — how can we? We should just do what He told us to do — watch. After all, we have already been dead a long, long time, no?

Most viewed articles
On the Dormition Fast124
Faith and Moral Freedom71
Patriarch Kirill: “The Memory of the New Martyrs will Help Us to Be Faithful to Christ amid Modern Temptations”64
Dormition Fast: Lesson on Silence53
Lord, Save Me!46
Bishop Nicholas of Manhattan visits Holy Cross Monastery in West Virginia46
Patronal Feast Celebrated in St. Anna Convent in Vashkivtsi37
Condolences of Patriarch Kirill over the death of believers in the fire that broke out in Abu-Seifein Church in Cairo21
Most popular authors
Pravmir.com team292
Archpriest Michael Gillis71
Metropolitan Anthony (Pakanich)53
Fr. Theodore Stylianopoulos46