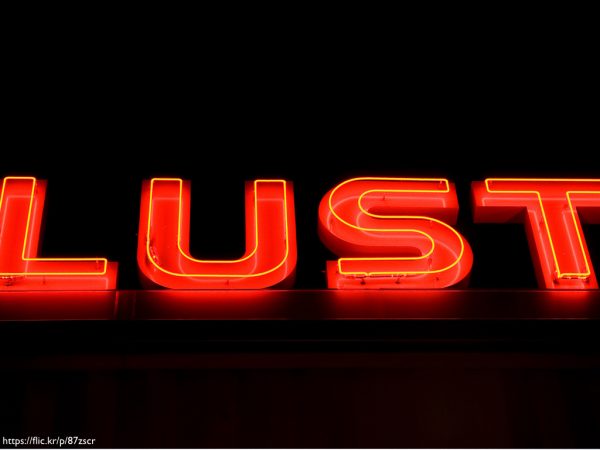 Ah… I thought this might catch your attention. But you may be a bit disappointed in what follows.

Lust is defined in our Antiochian Pocket Prayer Book as “impure and unworthy desire for something evil”. So sexual lust is only one kind of lust.

It is often said, for example, that people have a lust for power or revenge. The word “lust” suggests strong desire – compelling, potentially out of control – so that we find ourselves doing things we know we ought not to do, doing what we do not even want to do, so we fall into it again and again. I wonder if this is what Saint Paul was talking about: “What I am doing, I do not understand. For what I will to do, that I do not do; but what I hate, that I do… I know that in me (that is, in my flesh) nothing good dwells; for to will is present with me, but how to perform what is good I do not find. For the good that I will to do, I do not do; but the evil that I will not to do, that I do.” Romans 7:15 -19

The fathers called these “passions”: unworthy desires which feel nearly irresistible, or perhaps we have

become so attached to them that we choose not to resist. Saint John of the Ladder says these demons (especially that of fornication) darken our minds, urging us to do things which when we return to our senses seem completely mad, and we’re ashamed. The Ladder of Divine Ascent, Step 15. On the icon to the right, note people about to fall (be pulled) off the Ladder.

Some, especially in Western Christianity, call these “besetting sins” (taken, I suspect, from Hebrews 12:1: “…let us lay aside every weight, and the sin which so easily besets us”) – strong temptations which attack us, then withdraw for a time so that we think we’ve got them conquered, and then they hit us again. It is said that each of us has at least one passion, one besetting, persistent, tormenting sin. Different people have different passions. One person may be greatly tempted by alcohol but not at all by anger. Another person may be the opposite. One besetting sin may lead to another. Lust for alcohol can lead to lust for nicotine and sexual lust.

What (in “earthly” terms) causes these passions? Is it heredity? environment? is it chemical? psychological? habit resulting from many bad choices? It may be any or all of the above. Could we have resisted? If we yield we are never sure. God only knows, he who knows us better than we know ourselves. This means that it is not our job to judge other peoples’ culpability, for we are usually not even able of judging our own. Remember, sin means simply “missing the mark”. Our goal is not primarily to dwell on our guilt, but rather to repent, analyze and get our lives back on target.

In popular usage our lusts and besetting sins are sometimes called our “demons” – and the ultimate cause really is demons. The devil hits us at our weak points. He is the great enslaver, who tries to destroy our freedom and get control of us. In Luke 8:27-39 Christ came upon a man possessed by demons, which caused him to do irrational, anti-social things and made him a danger to others, so that he had to be kept under guard, bound in chains – but he would break out again and was driven into the wilderness, where he dwelt in the tombs, a living death. This is a symbol of our demons and what they can do to us, and what they have done to people we know and love.

Some of the more common Lusts

resist. This is a medical condition which can afflict anyone, rich or poor, high or low. The person with the addiction has a responsibility to get help. If there is moral culpability here, usually it is not in giving in to the addiction, but rather in being too proud to seek help. And now we’re back to pride again, the root cause of all sin: “I don’t have a problem. I can stop anytime. I can handle it by myself” – that’s pride.

Dealing with some addictions may require “tough love” on the part of family and friends who, out of mercy and compassion, may need to stage a painful intervention to try to save the addicted person from destruction. From this we can learn why God, who is merciful and loves us, is not always “nice” to us. Sometimes he must show all of us tough love. He intervenes and causes us pain, lest we destroy our souls with one of the deadly sins.

3 There are also lust for food (gluttony) and lust for money (greed), which were covered in earlier posts.

4 Lust for power, the desire to control: “I must have my own way.” Like all sins, this is something good twisted out of shape. God has given us power and authority – to be used not to please ourselves but rather humbly and responsibly for the good of others, submitting ourselves always to God’s will and power and authority.

This one needs to be talked about. How common is lust for power? The answer: “It is very common in others, but not in me!” Married people, for example, know how often you feel that your spouse thinks he or she is always right, always gets his or her way – but then your spouse claims that you always think you’re right, that you always get your way. This is because our lust for control is often hidden from us, but not from the people around us. This is particularly dangerous, for we do not know to repent of sins we are unaware of. The people we deal with and who love us are forever saying to themselves, “Oh, I’ll just shut up and let him have his way, it’s not worth the fight” – and we never know it. Those with addictions to alcohol or sexual lust often repent, because their sin is so obvious, and they’re ashamed. But lust for control can have us in its grip, and we don’t even know it. And when that happens it is a terrible demon.

I’m sure you have dealt with people (I hope you

have not been one of those people) who must always dominate, whether by force or intimidation or manipulation, playing on other peoples’ guilt or their weaknesses, or (worst of all) taking advantage of their love. Lust for control can do horrible things to marriage, family, parish and friendship, creating resentment, anger and alienation. When lust for power gains control of a person in high position or of a nation (for example, Hitler and Nazi Germany), horrible things can be happen in the world.

5 Finally, what most people mean by lust: sexual lust. Let’s spend some time on this one. (Sorry, no pictures, at least not those kind of pictures…) This sin, like all others, is something good twisted into evil. Sex is a good thing, given by God who created us male and female in his image and told us “be fruitful and multiply”. Genesis 1:27-28 However, contrary to popular myth, sexual activity is not a need. It’s only a desire. Our witness to that is the monastic life, where for higher purposes men and women live entirely fulfilling lives without physical sexual self-expression. Not many are called to that life; it’s often a struggle for those who are. But they don’t die, as they would if they gave up food and drink.

The God-given purpose of sexual desire is to draw a man and woman together, so that they can express their love and complete commitment to each other within marriage, and to produce and raise children in a stable family. Sexual union creates a permanent spiritual

union I Corinthians 6:16-18. Therefore, lest peoples’ interior lives be torn apart spiritually, the teaching of the Church has always been absolutely uniform: Sexual union belongs only within marriage, which by God’s creation is heterosexual. The desire for sex for other purposes is sexual lust. It is no secret that for many people this is very difficult, especially in the contemporary world where so much in TV commercials, movies, books, the internet seems to enflame sexual desire, often (if you’ll note) for commercial purposes.

Most viewed articles
God Is With Us… And Nothing Else Matters143
A Little Light and the Darkness Will Become Heaven106
Metropolitan Hilarion: Actions of Extremists Caused Serious Imbalance in the Centuries-old Christian-Islam Relations in Syria97
I Have Fought the Good Fight, I Have Completed the Race75
The Light of Epiphany68
Another Cleric of the Ukrainian Orthodox Church Attacked in Zaporozhie49
2021 March For Life Becomes Virtual Event Over Safety Concerns Near Capitol and COVID Restrictions36
Getting an Early Start on a Late Pascha1
Most popular authors
Pravmir.com team146
Fr. Gabriel Bilas143
Protopresbyter Themistoklis Mourtzanos106
Metropolitan Hilarion (Alfeyev)75
Priest Luke A. Veronis68
Andrea Morris36
Archpriest Thaddaeus Hardenbrook1