The Spirit of Giving According to the Three Hierarchs 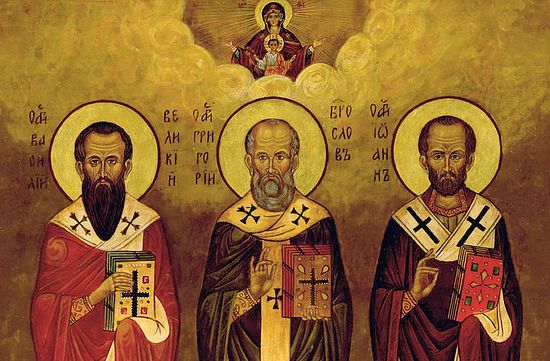 “Remember your leaders, those who spoke to you the word of God; consider the outcome of their lives and imitate their faith.” What appropriate words of advice from the Apostle Paul as we celebrate the feast of the Three Hierarchs. We remember and honor the three great Ecumenical Teachers – Basil the Great, Gregory the Theologian, and John Chrysostom.

Imagine, in the 12th century, there arose a sharp controversy among the faithful in Constantinople over who was the greatest among these church fathers. Like many disputes, even a debate about saints and their divine teachings, tempers began to flare and passionate and acrimonious arguments left people with ill-feelings toward one another. Imagine, arguing and getting angry with one another over which saint is the holiest and whose teaching is the most sublime!

The debate ended when Saint John of Euchaita received a divine dream in which the three hierarchs came to him saying, “There is not a first, second or third among us but if you invoke one of us, the other two are immediately present with him. Therefore, tell those who are quarrelling not to create divisions in the Church but to celebrate one feast that honors the three of us, and through us, honors Almighty God.” That is the origin of the Feast of the Three Hierarchs.

Of course, on such a feast we could say much about the holy lives of these great men, their brilliant explanations of the faith, and their incredible contribution to the Church in the 4th century and beyond. For today, however, I want to simply lift up a few sayings from their teachings on GENEROSITY and GIVING. The Three Hierarchs each encountered the transcendent God in a life-transformative way and after experiencing this Divine Love, articulated to the Church how all are to respond to God’s love – with generous giving.

Saint John Chrysostom emphasized “A faithful person must do everything with an eye to the public benefit of all… I do not believe in the salvation of anyone who does not try to save others.” He then went on to define what it means to be rich in the eyes of God: “The rich man is not the person who has much but one who gives much for what he gives away remains his forever.”

Imagine, what we give away remains our forever! This is Christ-centered giving. And although we can give money to those in need, Chrysostom notes that “to always be ready to serve the needy with love and in a fraternal spirit, this requires a truly great soul.”

St. Basil the Great wrote a treatise on social justice and the need to imitate the philanthropy of God. In it he warns us that “Those who withhold any of God’s gifts for their own enjoyment, failing to help others, are condemned like the servant who ‘hid his master’s money.’” He challenged the people of his day and us today, with the teaching: “To the extent that you abound in wealth, you are lacking in love.” He criticized the comfortable path that many of the faithful took when their piety cost nothing.

“You do injustice to so many, since you could help others but don’t… If you begin to guard wealth it will not be yours. But if you begin to distribute it, you will not lose it…Remember, the bread in your cupboard is the bready of the hungry; the extra garment hanging in your closet is the garment of those who are naked; the shoes you do not wear are the shoes of those who have none. The acts of charity that you can do but choose not to, are among the many injustices that you commit.”

St. Gregory the Theologian wrote how “everyone has the same Maker, the same law, and the same judgment” and thus, we need to help our brothers and sisters.

“Give something, however small, to the one in need. For it is not small to one who has nothing. Neither is it small to God if we have given what we could… Seek to distinguish yourself from others only in your generosity. Be like gods to the poor, imitating God’s mercy. Humanity has nothing so much in common with God as the ability to do good.”

Wow! What a statement. Seek to distinguish yourself from others only in your generosity! Be like gods to the poor, imitating God’s mercy. What a beautiful way to distinguish ourselves!!!

Not only in words, but of course in their actions these hierarchs exemplified this worldview of generous giving. Chrysostom mobilized people and resources to support thousands of widows, the sick, the imprisoned, and even foreigners in Antioch and Constantinople. Basil’s activities were diverse and amazing through his organization of the first hospitals, orphanages, hospices, schools and workshops.

These three hierarchs tried to live out the words of today’s Good News: “Let your light so shine before others that they may see your good works and give glory to your Father who is in heaven.”

Thus, today on this special feast day, we have to ask ourselves how will we choose to honor these three great Church Fathers? Will it be simply with some hymns we sing in Church or will it be by imitating their spirit of giving and generosity.

Archbishop Anastasios of Albania says, “The opposite of love is often called hatred. But its real name is egoism. Christian life means continual assimilation of the mystery of the cross in the fight against individual and communal selfishness.”

The three hierarchs reflect this “fight against individual and communal selfishness” not only through their writings, but especially through their sacrificial lives of generosity.

The rich man is not the person who has much but one who gives much for what he gives away remains his forever.

To the extent that you abound in wealth, you are lacking in love.

Seek to distinguish yourself from others only in your generosity!