The Times They Are A-Changin’

Seriously, you can’t make this stuff up. Recently I came across a news story that had everything: patriarchal men facing off against earnest feminists who were protesting male oppression and church traditionalism. The story had liberated sexuality, violence, and people screaming in frustration who couldn’t take it any more. It had a conference of 17,000 who gathered at the annual the National Meeting of Women in San Juan, Argentina to discuss violence, gender issues and abortion rights. It had a burning effigy of the Pope, surrounded by crowds chanting slogans. It even had topless women. A journalist’s dream. Why then has it not been all over the news? After all, you can blur the topless parts. Who wouldn’t eat up a story about earnest feminists assembling to discuss and denounce male oppression who find themselves confronted by horrid patriarchal men from the church? 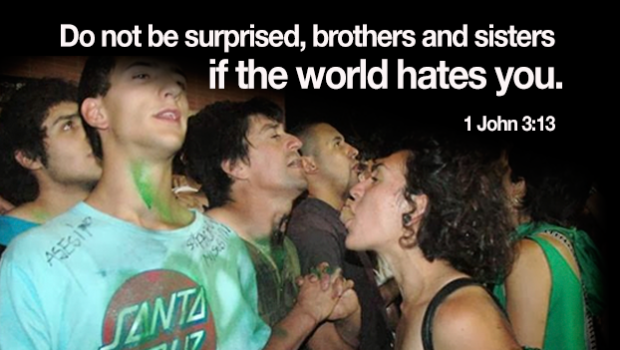 Maybe because the horrid patriarchal men from the church weren’t the ones doing the confronting. It was the women who were doing the confronting, going topless and storming the Roman Catholic cathedral in Podomos, Argentina, the city where the conference was held, to inflict damage upon it in the name of their cause. Last year 500 tried to storm the cathedral. This year it was 7000 feminist troops who tried to storm the building. You can read all about it here, including watching a brief news video.

In anticipation of this year’s storming, 1500 turned up to defend their San Juan cathedral from damage. The men linked arms in a ring outside to prevent entry. The women responded by going topless, shouting obscenities, molesting them, spitting at them, and spray-painting the faces and bodies of the men. Yep, spray-painting, mostly their faces and crotches, some with Nazi symbols. Oh, and chanting too. What would a feminist protest be without chanting? In this case they chanted, “To the Roman Catholic Apostolic Church, who wants to get between our sheets, we say that we want to be whores, transvestites and lesbians! Legal abortion in every hospital!”

Wow. Like I said, you can’t make this stuff up. What were the men doing when all this physical abuse against their bodies was going on? They were praying the Rosary. Some were weeping.

White bearded oldsters like me may be reminded of a line from Bob Dylan: “There’s a battle outside and it’s ragin’. It’ll soon shake your windows and rattle your walls, for the times they are a-changin’.” Dylan was of course talking about something else entirely (and something then much needed), but the pertinent martial imagery is irresistible when looking for words to describe the current situation. The times they are a-changin’. I have, of course, no crystal ball with which to foretell the future. I cannot tell whether or not the violence accompanying this Conference (which I assume left the organizers of the Conference and the majority of its attendees properly appalled) will continue to escalate as the numbers seem to suggest. It could be that future sessions of such feminist conferences will be happy peaceful affairs, in which quiet thoughtful (and fully-clothed) women ask their Christian male friends to sit down at the table of serenity and joint-dialogue. But I am not betting our church’s building fund on it.

The issue of course is larger than this annual women’s conference, or even about feminist movements in general. Rather the issue is the increasing hostility with which Christians are regarded throughout the world. If you doubt that “hostility” is the right word to use here, ask yourself why this story was not front-page in your town. The media does not want to portray Christians as victims. Everybody knows that Christians are the big, bad guys. Christians have already been designated as The Oppressors, and so cannot ever qualify as The Oppressed. And since the men being oppressed, molested, spit upon, and abused in San Juan were Christians, the media clearly thought that it was better to simply suppress the story entirely. Thus whether one looks at the determination to eliminate opposition to the Gay Rights movement in Russia (much reported), or the escalating incidents of persecution and even martyrdom of Christians throughout the world (much under-reported), the times are a-changin’ for the disciples of Jesus Christ who still cling to the traditional Faith once delivered to the saints. It is, I suppose, to be expected. St. Paul warned us in 2 Thess. 2:3 that before the End a great rebellion would occur. Even if this rebellion turns out not to be that rebellion, St. Paul’s words still apply, for he also warned us that “all who desire to live godly in Christ Jesus will be persecuted” (2 Tim. 3:12). Some may decry this is alarmist. I rather regard the situation as properly alarming.

At the very least one needs to open one’s eyes wide enough to see that “there’s a battle outside and it’s ragin’”. The battle, however, is not new. It is the timeless and perennial struggle between darkness and light, between the Church and the World. Byzantium and the post-Byzantine era, in both east and west, gave us a bit of a break from it, but that break is now over. The times they are a-changin. Let us take up the full armor of God, that we may be able to resist and stand our ground in the evil day.