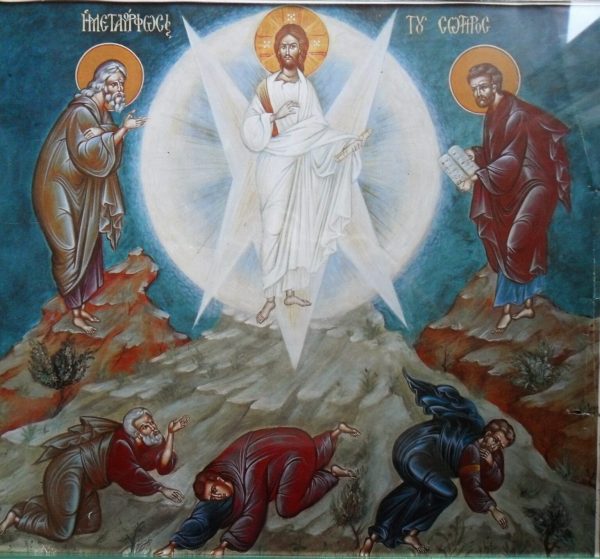 We hear a description of the incarnation of Christ in the popular Christmas hymn Hark, The Herald Angels Sing, which lends itself to our understanding of the significance of our feast today:

Veiled in flesh, the Godhead see,
Hail the incarnate deity!

Today, as we celebrate the Transfiguration of our Lord, the centrality of this event is that this “veil” which obscures our ability to see Christ as He is, was lifted and Christ was seen with the clearest of spiritual vision by three Disciples. Unlike how the Mother of God, Symeon the God-bearer, Anna the Prophetess, and John the Baptist saw Him, when Christ was seen as He walked in Galilee and Jerusalem, He looked to be a man like you and I. Only those who have had their hearts purified from passions, sins and their effects, are able to recognize Him and that only to the degree to which the Holy Spirit allows.[1]

What is distinct about the event of the Transfiguration of Christ is twofold and will be the subject of our homily today: first, it is a revelation about who Christ is, and, secondly, about how we are spiritually transformed.

It is quite popular to speak of “the doors of perception” and about those things which inhibit us from being able to see what is truly going on around us, and therefore many people attempt to overcome this blindness, this distorted vision, through drugs and by other means. Being aware of our motivations to do so, the founder of analytic psychology, C.G. Jung, once warned, “Beware of unearned wisdom.”

And yet, in Orthodoxy, and especially on this Feast today, we acknowledge that it is hard not to be deceived about our own selves, about others, and about the world around us. But in the narration of the events that surround our Lord being transfigured on Mt. Tabor, we are taught that although we may not know exhaustively, we can know true things about Christ and, by extension, about ourselves, and the world around us.

The Transfiguration of Christ

In the Gospel we heard a moment ago, let us back up a little to note what preceded this account. Jesus has just told His disciples, “Verily I say unto you, There be some standing here, which shall not taste of death, till they see the Son of man coming in his kingdom” (Matt. 16:28). Then the Gospel passage which we read begins by saying, “And after six days…”

Though it is incredible to see how God has manifested Himself, as mentioned earlier, this was an exceptional circumstance and not the usual.

The Fathers note that the Transfiguration happened forty days before Christ’s crucifixion and for the purpose of strengthening these disciples for this event: “that when they would see Thee crucified,” as we chant in the Kontakion for the feast, “they would comprehend that Thy suffering was voluntary, and proclaim to the world that Thou art in truth the Effulgence of the Father.”[8]

Yet may we not abandon this event as being irrelevant to us who are only at the beginning of the spiritual life not seeing it’s significance for us. For this we can see in the following four points:

Through the prayers of our Holy Fathers, O Lord Jesus Christ our God, have mercy on us. Amen.