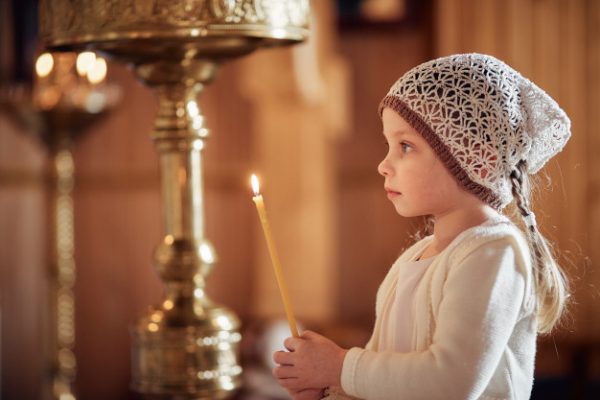 In a society obsessed with political correctness at all levels of life nobody dares to claim the possession of any truth that transcends material reality. This concerns religious beliefs in particular. Everyone is so scared to even use a simple “Merry Christmas” or “Christ is risen!” We don’t want any one to be offended. We therefore see centuries old greetings like “Merry Christmas” replaced with generic‚ one-size-fits-all‚ sayings of trite neutrality: “Seasons Greetings!” “Happy Holidays!” or even the contrived “Happy Quanza!”

As Orthodox Christians however‚ we know that the Truth we hold is not relative‚ but everything else is relative to it‚ depends on it‚ gravitates around it. Without this point of support‚ the Earth will collapse‚ and all our many and insignificant relative truths will be shattered with it. But what is this powerful and ultimate Truth?

David Brown offers “DaVinci’s code” and says: Jesus is a normal man‚ the Bible is a fake‚ the Church is a fraud. And the crowd listens and makes his book a bestseller. Can we call this “truth” or rather a sophisticated scam to sell more books? Then comes Michael Persinger‚ a neuroscientist. He claims that the disciples were members of a religious sect that administered to Jesus a psychotropic drug that induced a coma. Three days later he regained consciousness. No miracle on the cross. His proof: experiments on rats.

Episcopalian Bishop‚ John Shelby Spong‚ arrives with another version. All the so called miraculous events that happened in Jerusalem‚ are just a symbolic interpretation of some very natural facts‚ according to the Midrash Jewish tradition. Spong asserts that Jesus died on the cross and did not physically rise‚ but his disciples continued to spread His teachings‚ making His message of change‚ peace and love live forever. It really doesn’t matter if Christ is resurrected.

So where is the truth? Are they all variations of a relative truth? The short answer is no. I simply cannot admit they are all true. I cannot accept that Christ is risen and in the same time Christ is not risen! There is only one Truth and by this Truth only I will abide.

Jesus says: I am the Way‚ the Truth‚ and the Life; no one comes to the Father but by Me (John 14:6). Where is the relativism here? I believe in Christ and His resurrection or I don’t! How can we call ourselves Christians if we don’t believe Christ is the Son of God who rose from the dead? If this is not true every other single truth of faith falls down like a domino. Christ’s Resurrection is the One Truth that sustains our way of life‚ the corner stone of a meaningful existence.

I don’t need a scientist to tell me what happened on the Golgotha‚ I don’t need a writer to invent false stories about Jesus because I know‚ in my heart that Christ is risen‚ then and now and forever. He died on the Cross for my sins and is risen so I can follow Him in Resurrection. There is no science that can explain this because God’s reality reaches beyond the boundaries of matter.

It is enough for me to remember the supreme sacrifice of the Church martyrs to realize the power of the Truth we hold. They died in the world expecting to live forever in Christ: simple and sublime faith! Their martyria preserved this Truth unchanged‚ despite the odds‚ allowing us to be still called today Orthodox.

Therefore I choose to carry on their pure faith and to boldly proclaim the fundamental truth of my faith‚ the only thing that really matters: Christ is Risen! He is Risen indeed!

Lent – An Intimate Journey to God

Lessons from the sermon on the mount

Most viewed articles
Our Prayers Should Not Be in the Form of Bargaining134
Conference on the 100th Anniversary of the Russian Church Abroad to Be Held in Belgrade in November105
Of Snakes And Men103
Happy (Church) New Year!101
Glorying In Our Weaknesses88
Representative of the Russian Church at the G20 Forum Stands Up for Believers in Africa and Ukraine64
Conference “World Orthodoxy: Primacy and Conciliarity in the Light of Orthodox Teaching” Starts Today38
Timișoara: Midnight Liturgy and procession with relics on 65th anniversary of canonization of St. Joseph the New26
The Cross, the Goo, and the Butterfly1
Most popular authors
Pravmir.com team203
Abbot Tryphon134
Deacon Andrei Psarev105
Fr. James Guirguis103
Archpriest Michael Gillis88
Aurelian Iftimiu26
Fr. Jeremy1