You for example, you chose to come to this church you could save someone else's soul. I call that a sacrifice. I am hoping that you are concerned about preserving the Orthodox faith. The faith that we hold so dearly. I am also hoping that your major concern, coming in the Church, is to save people who are lost, give food to the hungry, give cloth to the naked, visit the sick. You sacrifice yourselves trying to make this world a better place to live. You choose to fight evil. And you know this fight will not be easy, but you do it anyway.
Fr. Ambrose Bitziadis-Bowers | 06 March 2010 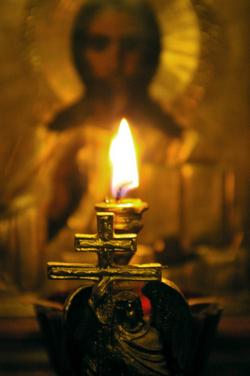 When Jesus asked the disciples to follow Him, He did not give anything in return, but only the promise of the Kingdom. In today’s Gospel reading Christ invites us, “if any one will come after me, let him deny himself, and take up his cross and follow me.” Usually we are invited to a party or a banquet. However, Christ’s invitation is actually a request to sacrifice ourselves for a better choice, that is paradise. In his invitation, Christ asks us to be His disciples. To be a disciple of Christ requires a lot of sacrifice. When Jesus asked His disciples to follow him in the beginning of his ministry the Apostles sacrificed many things: their work, families, and friends. Though they know that following Christ is to have many enemies, yet their faith in Christ overrides those fears and worries.

Today’s feast on this 3d Sunday of Great Lent is the Veneration of the Holy Cross. The Cross meant a great deal for Christ. Through the Cross Christ died so that He can descend into Hades and destroy the power of death. Through the Cross Christ has died and risen. His resurrection means that the power of death has been conquered. Christ is the greatest teacher of sacrifice. He sacrifices his own life in order to save us from the power of death. He knows that he will die on the cross, and he could avoid it, but he does not. He even carries his own Cross through the street of Jerusalem to the mount of Golgotha. The same Cross which the soldiers will use to crucify Him. The event of the crucifixion shows who we really are. God so loves us that He sacrifices His only begotten Son to save us, but our tendency to rebel still makes it difficult to have faith in Him.

When Christ asks us to pick up our cross and follow Him, He means that we crucify ourselves from the temptations of this world. We resist all its temptations: individualism, pride, gambling, drunkenness, gluttony, hatred, jealousy. Following Christ will not get us the richness of this world, but we become the sons and the daughters of God. We will not become rich because we are Christians, but we will inherit the Kingdom of God.

You for example, you chose to come to this church you could save someone else’s soul. I call that a sacrifice.  I am hoping that you are concerned about preserving the Orthodox faith. The faith that we hold so dearly. I am also hoping that your major concern, coming in the Church, is to save people who are lost, give food to the hungry, give cloth to the naked, visit the sick. You sacrifice yourselves trying to make this world a better place to live. You choose to fight evil. And you know this fight will not be easy, but you do it anyway.

I would like to tell you a true story I read in New York Times. A story about commitment, faith, and sacrifice. About five years ago, a young Muslim from a pious Muslim family and the son of an imam, an Islam clergy, left his village in West Java for Central Java to look for a job, but he could not find any. He was alone, no friends, no family, and he was searching for any job he could find, but still he could not find one. One day he met a Christian and he was invited to a Bible study. He came and he asked many questions about Christianity and the differences between the Christian faith and the Islam faith. It is usually uncommon for a Muslim to come to a Christian Bible study.

Not long after the event of the Bible study he told the priest that he wanted to be baptized a Christian. The priest was happy but at the same time he was worried. For a Muslim to become a Christian is a great offense against their God, and the punishment is execution, according to Islamic law. So the priest gave him instructions on the Christian faith, tradition, and dogmas. Later on he was baptized with the name of Photius.

Then he went home to tell his family that he converted into Christianity. And you can imagine what happened next. His father became very angry. He took a knife and went after Photius, but his brother saved him and told him to leave immediately. He left and never came back. Now he is married and lives in East Java. He lost his entire family because he decided to follow Christ. His only family is us the Orthodox Christians who love him and care for him. His is not richer than before but he is a faithful Christian who is building his richness in heaven. He now helps the missionary work in East Java.

To follow Christ is to be his disciple and his witness. To be the witness of Christ is not easy, it takes a lot of patience, discipline, and determination. We witness our faith through our lives and actions. Through our lives and our actions we demonstrate our beliefs as Christians. There are many things that we can do. We can visit our friends, our neighbor, or any body who are sick in the hospital. Maybe on a certain day we can collect non perishable foods and donate to them. We can collect our old clothes that are still good, clean them and donate them to the Salvation Army, for example. We can do many things to help the poor, the hungry, the sick, the naked, the weak.

If you are ready, you can become a missionary, either here or overseas. Some of our own people leave our community because of misunderstanding, and go blindly to another faith. It is up to us to bring them back to the our Lord Jesus Christ. We can make this our missionary activity. We must become an active witness to our faith in our public life, to show them what Christian life is all about by our example. Some of us in this Community or someone you know have already gone to other countries to be missionaries. They went there to help our brothers and sisters humkan beings or to built their churches and to strengthen their faith. They let them know that they are not alone. They show them that their brothers and sisters form afar care for them, love them, and worship in the same faith.

So, let us make this feast of the Veneration of the Holy Cross as our starting point to be the true disciples and witnesses of Christ. We take time off in our busy schedule to celebrate this feast and to remember the day when Christ was crucified. Christ is the best example of sacrificing oneself for others. Christ’s sacrifice was not an object that you can buy or sell, but a sacrifice of self so that through his death he gives life to all. Brothers and sisters be the true followers of Christ. For as adopted children of God through our baptism, we are one family, one body, and one community in Christ. Amen

We like everything to be clean and sanitary. We want the joys of life, without the pain. We…