In my very early Exxon days, before I was ordained, I didn’t want to be great and I didn’t want to be first. I wanted to be humble. I didn’t speak out a lot in meetings, trying not to call attention to myself. I deferred to others’ judgments, even when I had questions about them. I mistakenly thought that this was what Christians in the workplace should do.
Protodeacon Peter Danilchick | 20 October 2011

“How can you, a churchman, go to work for a capitalistic oil company?” asked Fr Alexander Schmemann, when I became an employee of Exxon in 1970. Fr Alexander, then Dean of St Vladimir’s Seminary, and I had been acquainted for some years before. We’d corresponded on and discussed church issues, especially when he visited Syracuse NY. I was in graduate school there studying engineering.

By this time, I was accustomed to Fr Alexander’s forthright manner and quickly responded: “Don’t worry, Father. Exxon is a very ethical and moral company. If I step out of line one iota, I will be gone.” This statement that I made at the beginning of my Exxon career, I could repeat with full confidence thirty years later.

Five years after starting at Exxon, I was ordained Deacon in the OCA and remained an Orthodox deacon and Exxon analyst, then manager, and finally executive through the next three decades.

If you’ve ever seen old Western movies, you might have viewed a scene in which the cowboy hero jumps on two horses, one foot on either saddle, and rides away chasing the bad guys. It’s quite a trick. I have often felt the same way juggling both Church and company responsibilities. It becomes even more complicated when you are a husband and father of three children and you move around the world every two or three years. 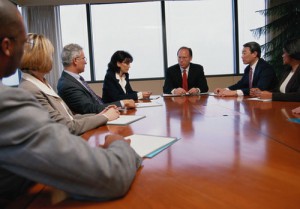 Since this article is about the workplace, I’ll concentrate on that. Frankly, I encountered little conflict between my life at Exxon and my life in the Church. Was this because I had low expectations for both? I don’t think so. Rather my Church vocation as deacon (the one who serves) became both tested and fulfilled during the hours at work.

In my very early Exxon days, before I was ordained, I didn’t want to be great and I didn’t want to be first. I wanted to be humble. I didn’t speak out a lot in meetings, trying not to call attention to myself. I deferred to others’ judgments, even when I had questions about them. I mistakenly thought that this was what Christians in the workplace should do.

My manager had noticed this, took me aside, and emphasized to me that I had a responsibility to the company and in fact to all the others in my work group, to speak out and to take a far more active role. I began to realize that love for and service to others means involvement, taking responsibility and speaking out when we see better ways to do things. It doesn’t mean hanging back, being silent, and “going with the flow”. At about the same time, I came across St John Chrysostom’s saying: “If one sees his brother doing something wrong and under the guise of humility does not correct him, that same brother will condemn him at the Judgment Seat.” This is a great responsibility that we all have, to make a difference with our brother or sister, with kindness, generosity and compassion, to “speak the truth in love.”

After some years, I began to take on managerial responsibilities, leading groups as varied as twenty professionals in head offices and over a hundred operating personnel at an oil refinery. At the same time, I served the Church in Texas, Tokyo, Singapore, Sydney, Hamburg, and Hong Kong. The robe and stole that I wore at Sunday Divine Liturgy was still with me in a spiritual sense throughout the week, although I wore a hard hat and jeans in the refinery, and a business suit and tie in the head offices. Regardless of apparel and surroundings, I knew that I must serve those for whom I am responsible at work just as I serve the Lord and His people at church. This goes not just for deacons but for all of us in the Church. The robe (or sticharion) that both the priest and the deacon wear as their “first garment” when serving liturgically is nothing but the baptismal robe that we all were clothed with at our own Baptism. That robe is indelible – it cannot be erased. We have put on Christ. That robe shines every day — if we want it to, with God’s grace.

Soon after my ordination, we moved to Houston, Texas. I was interviewed by the Houston Post newspaper religion editor regarding some mission work I was attempting in the city. An article was subsequently published, which had my picture in clerical attire. The head of my department at Exxon read it, and had copies posted on every bulletin board in our 500-person office. Needless to say, I received a few reactions from my colleagues on that. But I did receive one of the nicest compliments I’ve ever received, which paradoxically remained as the greatest challenge to me for my entire life. One of the department secretaries came to me after the picture posting and said: “I knew there was something different about you – and now I know what it is.” I felt overwhelmed by that simple statement (I still do) and learned a great lesson. People know who you are despite all your efforts to conceal it (or to fake it), both for good and for bad.

Fr Tom Hopko said a lot of things about Christians in the Workplace many years ago which are recorded in his CD “The Work of the People of God” published by St Vladimir’s Seminary Press. One experience he recounted there made a big impression on me. He was asking someone in his parish what he did for a living. The man said that he worked in a factory and that he made holes in metal plates. Sounds simple, right? The man went on to say: “But I make great holes. The young fellas coming in, they don’t make such great holes.” The lesson here is that whatever we do, we do the absolute best we can. In this way, we take responsibility and serve others through our work. The next person down the assembly line depends upon us to do our work properly. If we foul up, they foul up. The words of St Paul should echo in our ears: “we are members one of another.”

By far the greatest satisfaction that I ever received at work was working alongside people, whether they were my superiors, peers, or subordinates on the organization chart. That didn’t make any difference. We worked together for a common cause. We sweated together as deadlines drew near. We shared each others’ successes and failures, victories and defeats. We encouraged one another when times were tough and celebrated when times were good. I’ve been retired for many years now. When people ask me if I miss the work, I say “no, but I miss the people.”

In many of the epistles of St Paul, he ends his letters, whether they are scolding or encouraging, with words of tenderness about the people, his beloved co-workers. One of the great opportunities for us all in the workplace is to truly regard it as the “vineyard”, as a living laboratory of love and service, kindness and generosity, forbearance and patience.

Not all of us can go to a monastery or to a life of full-time church service, and to practice these virtues there – but we can certainly go to work. And hopefully, when co-workers hear that we are Christians, they’ll say: “I knew there was something different about you…”

Orthodox Christians in the Workplace 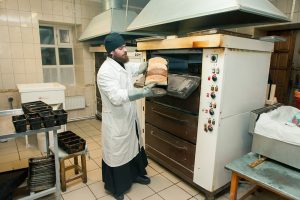 It is through prayer that we sanctify our work as well as ourselves.  Therefore, it is…

“He longed to preach the Gospel to those who had not heard it.” So one historian described Saint…