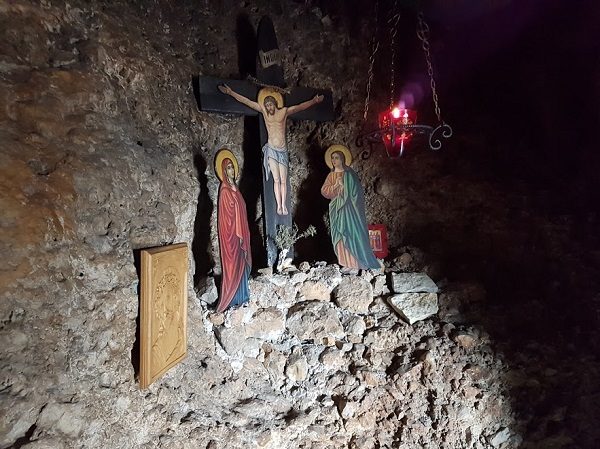 In this period, we have two fasts, as we all know. There are about seven weeks of strict fasting, eight if you include the Cheese-fare week which precedes. For a lot of people this is an enjoyable and desirable time, for others it’s difficult and for others again not at all pleasant. We’ll try to convey some thoughts on this period, as it has been described by the Fathers of the Church.

First of all, let’s recall Saint John the Damascan, who made a general observation concerning Lent. ‘Do not weaken Lent, for it is an imitation of Christ’s way of life’. This is important. Christ doesn’t debilitate, that is drain the power of Lent. More broadly, we might say that Saint John doesn’t disparage Lent. He doesn’t say that this period isn’t right, nor does he mock the fast of the Church. He doesn’t dishonour it, he’s not displeased when it arrives, he doesn’t hope for it to pass quickly, he doesn’t make a show of breaking it without reason and nor does he express forcefully the view that times have changed and we must change with them.

Great Lent is an imitation of the life of Christ. After His baptism, He went out into the wilderness and there ‘having fasted for forty days and forty nights, he became hungry’ (Matth. 4, 2). Christ was the perfect human being and had no disposition to sin, but He needed to give us a model. We had to have an image of asceticism before us in order to achieve our goal, which is union with God. During this period, He suffered the temptations of the devil and during the time of these temptations, ‘angels ministered to him’ (Mark, 1, 13).This time of Christ’s temptations has much to teach us.

In a way, Christ was educated in temptations through fasting. Later, the devil would bear down upon Him like a dreadful tempest. He emerged the victor from all the temptations. As should the faithful. We’ll have plenty of temptations in our life. We need to be educated in them. This period of Lent is a spiritual preparation for us Christians. We learn to fight. The Lord has shown us how, since He was tempted first.

During the time of when He fasted, Christ was tempted and triumphed. The faithful are also tested. Why does God allow temptations? So that we can find out that we can rise above them. So that we’ll be humbled. So that the fiend can learn that we’ve abandoned him. So that we can strive. So that we can have direct experience of God’s gift. The angels of the Lord minister to those who strive.

The devil tested Christ during the period of His fast not only by certain means but also by the place He was in. Solitariness and isolation are often weapons of the devil. One example of this is Eve, whom he tempted when she was away from Adam. Isolation also sometimes brings monotony, sloth, hunger and anguish. So during a time of fasting, he takes heart and attacks us. When he sees us with others and well-organized, he doesn’t have the courage to do us any great harm (according to Saint John Chrysostom). This is why, during the fast, we should go to church, to the services, and support each other and be encouraged by the fact that we’re not alone in the struggle, but that we have the whole of the Church with us. The Lord was encouraged by the angels of God. So you can see what benefit we derive from holy Lent.

And then another Saint of the Church, John Chrysostom, writes that, during the period of great Lent, we trade our spiritual merchandise and acquire a wealth of virtues. He stresses that it’s no great achievement simply to get through the days of the fast, but that what’s important is to correct some of our flaws and to be cleansed of our sins.

It’s not unusual to hear people asking others how many weeks they’ve fasted and to find out that some have fasted for one, some for two, or three and others for the whole time. But what’s the profit in fasting for the whole of Lent, unless we acquire some virtue during that time?

If somebody tells you that they fasted for the whole of Lent, tell them: ‘I had an enemy and we became reconciled; I was in the habit of criticizing and stopped; I used to swear but was cured of that bad habit’ …We’ll derive no benefit from the fast if all we do is somehow get through it any old how. If we abstain from foods, then, when the forty days are over, the fast ends. But if we abstain from sins, then, when the time of fasting has ended, this fast (from sins) will remain and continue and will render us no small returns even before [we reach] the Kingdom of Heaven.

So we see that great Lent isn’t just a time for us to fast from food but is also an opportunity for us to practice virtue. When we manage to achieve that, then, on the great day, we’ll be worthy to approach the spiritual table, that is the divine Eucharist, and partake in the meal. Our attendance at the sacrament of life is sufficient motive for us to bestir ourselves in the spiritual struggle.

Sant Gregory the Theologian emphasizes that the fast is also the purification of our self. Before the great day of Easter, ‘it is cleansing for the feast’. Christians are able ‘to die with Christ’. Just as Christ mortified His body for the salvation of the world, so we can mortify our passions for our own salvation. The Lord fasted a short time before His temptation; we fast before Easter.

If we pass through the arena of Great Lent with thoughts such as these, we’ll be a lot better off for it.

Christ performed many miracles. He performed miracles on people, such as when He cured the paralytic at Capernaum,…

No matter how many clouds are gathering over our heads, no matter…

Are We Religious or Are We…

Most viewed articles
Be Bearers of Light112
The Meekness of God99
Report: 5.2 Billion People Face ‘Very Severe Violations of Religious Freedom’85
Metropolitan Mark of Ryazan Explains Why People Sometimes Don’t Know What to Repent of83
Orthodox Chapel to Be Constructed in Campina das Missoes81
Priest Killed for Serving in Romanian to be Honoured with Bust in Albania60
Ukrainian Church Calls for De-Escalation of the Conflict in Donbass58
Are We Religious or Are We Faithful?37
Metropolitan Anthony: “It’s Important to Celebrate Pascha in a Worthy Way, In Spite of All Obstacles”21
How Will We Welcome Christ?1
Most popular authors
Pravmir.com team307
Metropolitan George (Khodr) of Mount Lebanon112
Archpriest Stephen Freeman100
Aurelian Iftimiu60
Fr. Vasile Tudora37
Metropolitan Anthony (Pakanich)21
Priest Luke A. Veronis1