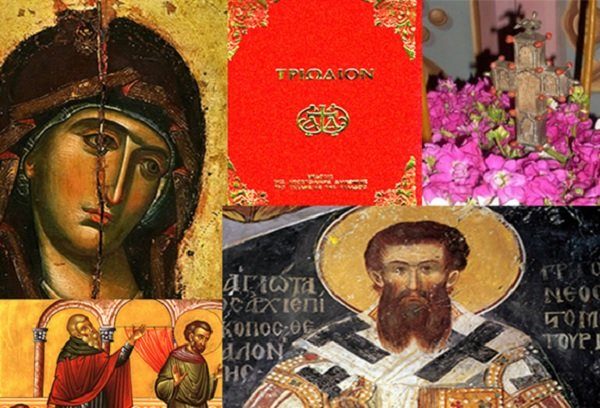 We’re entering the Triodio, the period of contrition in the liturgical year during which hymns are sung which are very deep and powerful. The hymns of the Triodio reveal the dread mysteries and the conditions for eternal life. It’s a genuine and true study of death which leads to the Resurrection and not to the bright light at the end of an imaginary tunnel. It’s a period full of sanctified figures, such as John of the Ladder and Mary the Egyptian, and is adorned with the Salutations to Our Lady, culminating in the hymns of Great Week. Then every person in pain is soothed. Their lost powers are restored and they move onwards to the Resurrection.

Recently, a discussion has opened about the language and the style of the Triodio. It appears that some ears are offended by the selection of certain excerpts from the Scriptures as the starting-point for the hymns of the Triodio. Calls have been made to make the text more palatable. Other people talk of translating it into simpler language. Yet others would like it merely to be retouched. Others again would like it to be adapted so that it complies with the friendly, tolerant and dandified spirit of our age. Finally, some people hint at the expurgation of a number of hymns, because their content is medieval and obscurantist. We can see that this is an attack on moral liberty- affecting all of us- and a desire to reduce the hymn book to a ‘pocket guide’.

Those in favour of the above don’t know- or claim not to know- that is was precisely for these reasons that the Triodio was written. Its content is in sharp contrast to secular and religious compromises. In its hymns, the emotions aren’t flattered nor is there a joyful, diplomatic atmosphere. In poetic fashion the historical truth of certain events is confessed and their eschatological import assessed. If we’re to feel this, we have to study this sacred book seriously and with faith, as a pilgrim’s guide rather than a travel guide. We have to absorb the fact that, behind its arrangement and organization there’s no individual authorial expediency. Not even in terms of aesthetics or morphology. Besides, in real poetry, the form is in line with the eternal truth, which in this particular instance is the person of Jesus Christ, the Only-Begotten Son and Word.

Those who talk about translating the Triodio are getting ahead of themselves. They think that the archaic language in which it’s written is a hindrance. They believe that it fixes the text and puts it in the category of a fossilized literary genre, inaccessible to today’s readership and audience. Although this view has a value in positive philosophy, essentially it’s an excuse. Even if the entire hymnology of the Triodio were to be simplified people wouldn’t be bothered to pay attention to it because it doesn’t suit the style of the age. The Triodio was written for losers, not for winners. For people who’ve begun to remove themselves from the centre of the universe. Who are clinging on to the broken mast of some shipwreck, crying out to God for help. They’ve not grieving over the fact that they don’t have a yacht. So how much do people today need repentance, given that they’re weaned on novels, the cinema and the theatre? Bland dance routines, and ballet opera? It’s not the archaic language that’s at fault, but our own culture – which is at odds with the spirit of the Triodio.

In particular, there can be no discussion of any retouching or changing the flow of the texts. The Triodio is the flagship of the Church’s liturgical fleet. If it’s sunk by stealth, then the whole of liturgical literature will be at a tactical disadvantage. It will be taken prisoner by the modern spirit of mutual understanding and pseudo-tolerance. We might gain thereby a chair of Byzantine Studies at some grandiose university, but our liturgical identity will be surrendered to the spirit of global secularization.

What might be possible, as regards Greece, is a translation: the old text and a modern version in one volume, together with some explanatory notes which would not be out of place. In this way, people today who are caught up in the whirlwind of the electronic wilderness, would find comfort and hope. Toxified as they are by the continuing overdose of images and prattling voices, their souls would be calmed not with fictional lies but with mystographical truths.

The Unceasing Endeavour for Real Life

Whether people are monastics, clergy or lay Christians, they’re all called to the same spiritual arena in this…

Today the Orthodox Church Celebrates the Elevation of the Precious Cross

The Lord’s Precious Cross is the supreme symbol of sacrifice and sanctification for the Church of Christ, Who…