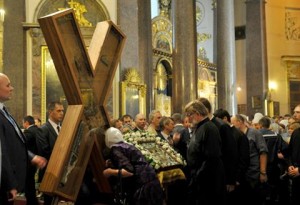 An Orthodox believer kisses the cross of St. Andrew the Apostle in the Kazan Cathedral in the Russia’s second city of St. Petersburg, on July 11, 2013. (AFP PHOTO / OLGA MALTSEVA)

SAINT PETERSBURG: Around 65,000 people have queued for hours in Saint Petersburg to see a religious relic brought from Greece, officials said Saturday, in the latest sign of the Russian Orthodox Church’s influence in post-Soviet Russia. The cross of Saint Andrew, which is said to be a relic of the X-shaped cross on which Andrew the Apostle was crucified, was placed in Saint Petersburg’s Kazan Cathedral Thursday after arriving from its historic home in Patras in Greece.

In just the first days of its display, there were some 65,000 visitors and the numbers are increasing all the time, a representative of the fund which helped bring the cross to Russia told the RIA Novosti news agency.

The cross has come from Greece as part of commemorations of the 1,025th anniversary of the Christianization of the medieval Slavic state of Rus.

The queue to see the relic snaked all around the Petersburg cathedral with the faithful having to wait for several hours to be allowed to briefly touch the object.

Local officials said that the atmosphere in the queue was cheerful.

“It is a great event for all Orthodox. I came especially to Saint Petersburg from my house in the country which is 200 kilometers away,” Tatyana Koroliova, 60, told AFP.

The excitement recalls the frenzy that surrounded the appearance of the Belt of the Virgin Mary in Russia in 2011 – also on loan from Greece – which attracted gigantic queues when it was put on display in Moscow.

The Russian Orthodox Church was suppressed under Communism but has staged an astonishing recovery in post-Soviet Russia to become one of the country’s most powerful institutions.

Symbolically, the Saint Andrew cross is being shown in the Kazan Cathedral in Saint Petersburg, which under Communism was turned into a museum of atheism.

But the anti-Kremlin opposition accuses the Orthodox Church under its powerful Patriarch Kirill of meddling in politics and also instigating the harsh treatment of the Pussy Riot punk group.

Two members of the punk collective are serving two-year prison colony terms for performing an anti-Kremlin song inside a Moscow church, in a case which divided Russian society.

The relic is due to stay in Saint Petersburg until Monday and then be taken to Kiev in Ukraine, Minsk in Belarus and to the Russian capital Moscow before returning to Greece on Aug. 2.