The early printed book was published in the printing house of the Pochaev Lavra.
Pravmir.com team | 26 January 2021 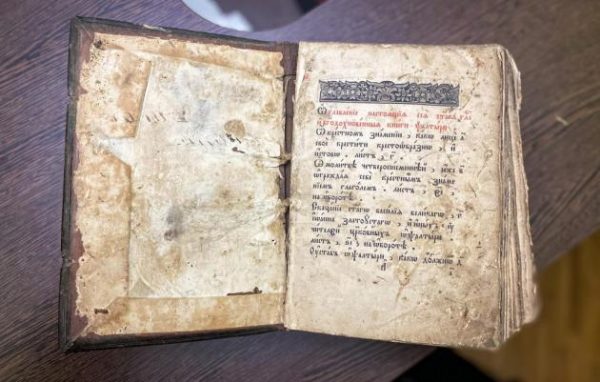 The fund of the Church-Archaeological Museum of the Kiev Theological Academy was replenished with a new exhibit on January 25, 2021.

A valuable early printed book: a leather-bound Psalter, published by the printing house of the Dormition Pochaev Lavra, was donated to the museum by His Beatitude Onuphry, Metropolitan of Kiev and All Ukraine.

The exhibit presented by the Primate of the Ukrainian Orthodox Church is of historical value, reports Kdais.kiev.ua.

The Church-Archaeological Museum of the Kiev Theological Academy was created in 1872 and became the first of the kind in the Russian Empire. By the beginning of the 20th century, the collection of the museum included materials from the 3rd millennium BC to the 19th century. After the coming of Soviet authorities, almost all of the exhibits were lost or taken abroad.

The restoration of the museum began in 2009 with the blessing of the Metropolitan Vladimir of Kiev and All Ukraine. The metropolitan donated items from his personal collection to the museum.

Today, as well as since the appearance of the museum, donations and gifts from hierarchs, clergy and laypeople are the main source of replenishment of the fund.

The museum is located at the building of the Kiev Theological Academy and Seminary on the premises of the Holy Dormition Kiev-Pechersk Lavra. Entrance for visitors is free.

Most viewed articles
Seven Lessons for the New Year from St. Seraphim of Sarov231
A Great Time to Join the Orthodox Church137
New Jersey Governor Signs Bill Legalizing Abortion Up To Moment of Birth98
The Way of Christ Is The Way of Love68
Metropolitan Hilarion Celebrates the 20th Anniversary of His Episcopal Consecration56
Metropolitan Hilarion: the Church and traditional confessions have done everything possible to improve the situation in Kazakhstan33
Brooklyn Street Co-Named for Antiochian Pastor Who Served a Half Century There33
Sunday of the Samaritan Woman1
How We Worship: the Struggle of the American Experience1
4-400×6001
Most popular authors
Priest Luke A. Veronis231
Frederica Matthewes-Green137
Ryan Foley98
Pravmir.com team89
Fr. Theodore Stylianopoulos68
Peter Samore33